If you are in LA, do yourself a favor and check out these two awesome film festivals focused on women in horror! 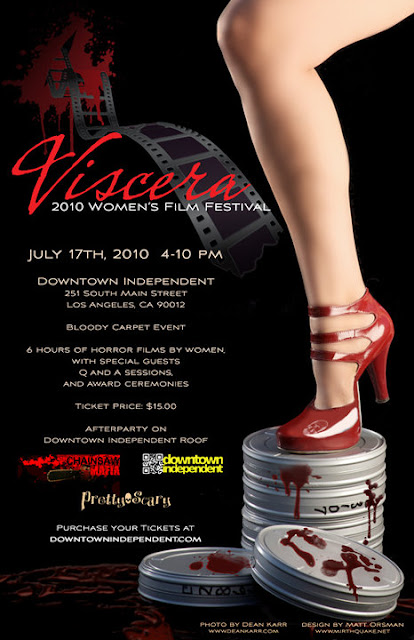 On Saturday, July 17th, 2010 you've got the first annual Viscera Film Festival (first reported HERE). Viscera has been celebrating women in horror for years (check out our reviews of their short film selections HERE and HERE), but this is the first time they are holding a physical film festival. The festival will be held at the Downtown Independent located at 251 South Main Street, Los Angeles, California starting at 4 PM with a Bloody Carpet Event followed by six hours of horror films by women, including Q & A's with special guests and an awards ceremony. Following the festival will be a KILLER afterparty where you can mingle (and mangle) with the hosts, special guests and fans. You won't want to miss it!!

This year's Viscera Film Festival is being hosted by The Chainsaw Mafia's Shannon Lark (interview) and Pretty-Scary.com's Heidi Martinuzzi (interview). Among the attendees are many women in horror that we interviewed for our amazing Women in Horror Month!

Tickets are only $15 and available now online. Show support for the event by joining Viscera’s Facebook page, making a donation, and purchasing the newly released 2008-2009 Viscera DVD.

The second film fest in honor of women is Bleedfest, hosted by indie filmmaker Lis Fies (interview), director of The Commune (review). Bleedfest is scheduled for Sunday, July 18th, 2010 at the Two Roads Theatre located at 4348 Tujunga Avenue in Studio City, California and will boast three feature-length films from women as well as short films and Q & A's with the filmmakers! 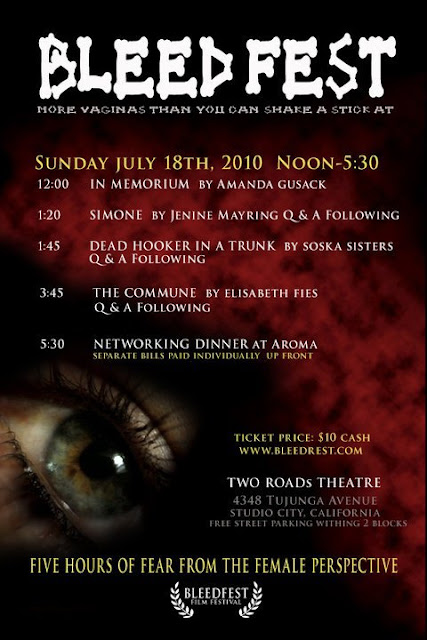 See the schedule below:

$10 for all day admission. There will be DVD giveaways as well as opportunities to buy the filmmakers' movies.

If you are in the Southern California area, you really don't want to miss either of these great film festivals celebrating the talents of the biggest and brightest women filmmakers!