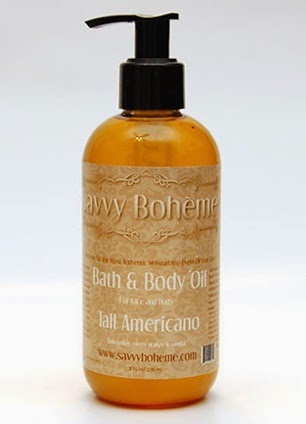 I received a sample of Savvy Boheme's Tall Americano Bath and Body Oil in a Vegan Cuts subscription box I purchased, and have been obsessed with this body oil ever since! At first glance, I didn't really think I would like it, and it sat on my dresser for quite a while before I decided to try it. I instantly regretted not using it sooner, because this stuff is amazing!

It is made with nourishing oils including grapeseed oil, extra virgin olive oil, sweet almond oil, apricot oil, and vitamin E oil, and infused with scents from the essential oils of coffee, sweet orange, and vanilla. It reminds me of a sunny Italian coffee bar with its strong scents of espresso and orange peel, and a subtle hint of vanilla. The scent is both invigorating and centering, and it has the ability to both wake me up and calm me, if that makes any sense! To be honest, I didn't think I would care much for the scent, which seemed a little too sunshine-y for this ghoulish girl. However, I now find the scent to be delightful and uplifting! 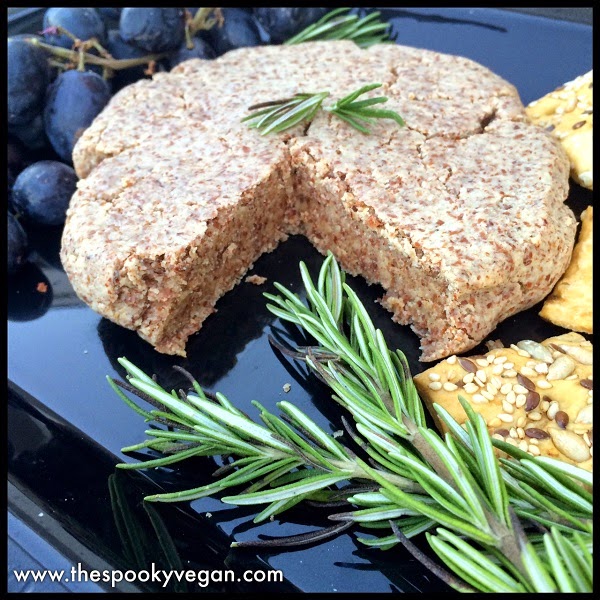 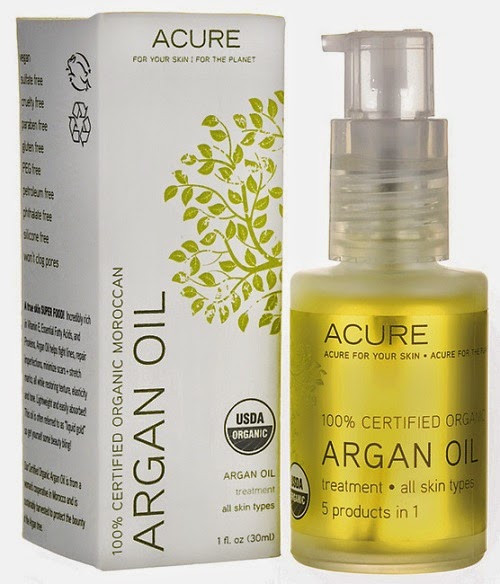 Lately I have been embracing my hair's natural curl and letting it do its thing instead of straightening it. The switch came about a month ago, when I decided to give my hair a break since it was becoming damaged from all the heat styling (blow drying and using a straightening iron at least 3 times a week) I was subjecting it to. Without blow drying and straightening, my hair is naturally curly, but it is also really coarse and thick with some frizz. I needed a product that tamed my hair, made it softer, but also one accentuated my curls, all with minimal styling (I refuse to spend more than five minutes on my hair in the morning). 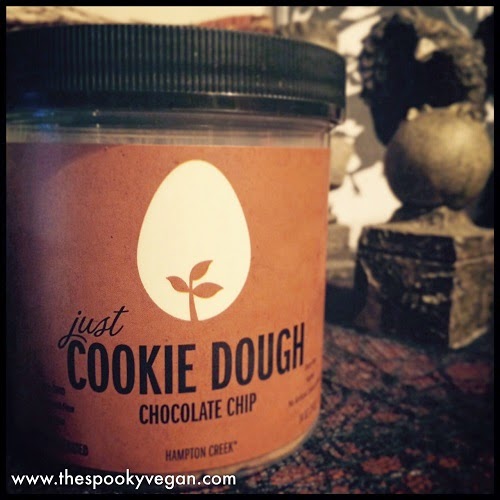 I have been looking forward to Hampton Creek's new Just Cookie Dough ever since I heard about it way back in 2014. Vegans already have the delectable Eat Pastry line of vegan cookie dough (which is freaking fantastic!), but I can't complain about having MORE options when it comes to vegan desserts! I finally spotted the Just Cookie Dough at Whole Foods in their refrigerated section, though there were only a few packages left (that's a good thing, though!)! I quickly grabbed a Chocolate Chip tub and couldn't wait to get home to enjoy some raw cookie dough (ah, another perk of eating vegan!).

Do you ever have one of those weekends where you just want to draw the blinds, cozy up on the couch, and do nothing/see no one/go nowhere? As an introvert/recluse/misanthrope, I feel that way every weekend day, and let's just say my natural state seems to be avoiding all human contact by electing myself president of the stay home alone club and lazing around the house in my pj's with no plans besides binge-watching the latest Netflix series and hanging out with my cat, Havoc (he is anti-social himself, so he is fully supportive of my stay at home weekends)!

Below you will find a quick guide on how I prepare for my perfect stay at home weekend and why I look forward to spending time alone. Join the recluse revolution and stay home this weekend!

Email ThisBlogThis!Share to TwitterShare to FacebookShare to Pinterest
Labels: about me, happiness, rituals, weekend 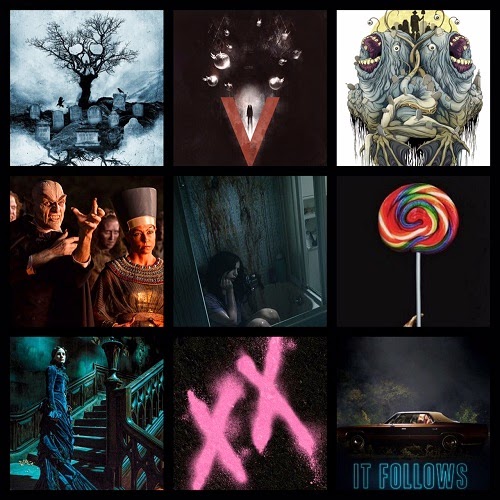 2014 was a great year for horror in quantity AND quality (read about my top 10 and other 2014 horror releases HERE), so I am eagerly looking forward to see what 2015 brings us! The majority of films I'm looking forward to in 2015 seem to be original stories from both newcomers to the genre and true horror maestros, but there is LOTS to choose from in 2015! The slate is already brimming with juicy horror releases, from indies to foreign films to major studio releases!

To give a clearer picture of the horror landscape of 2015, I've not only listed my most anticipated horror films, but also 2015 releases I'm a bit lukewarm on (I'm cautiously interested, just still iffy on them), and 2015 movies I have no interest in seeing. There are a lot of horror films listed, which is exciting to see at such an early point in the year! 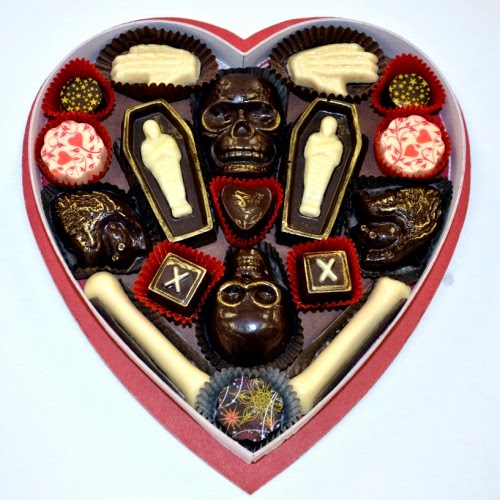 Sink your teeth into the Limited Edition Fatally Yours Chocolate Box!

UPDATE: You can view my "dissection" (aka review) of the Fatally Yours box HERE!

If you prefer skulls and skeletons instead of hearts and Cupid's arrows for Saint Valentine's Day, this decadent and macabre "Fatally Yours" chocolate box from Vegan Treats will be the gift you're dying for this year!

I have coveted this box the past couple of years, and finally decided I had to splurge and get one for myself! I mean, even the chocolate box's name "Fatally Yours" holds special significance to me as it used to be both my pseudonym as well as the name for the horror site I used to run (if interested, you can check out an archive of my writings here), so I just HAD to have it! By St. Valentine's Day, I'll be feasting on glorious bones, skulls, and other anatomies of the human body, all made from the finest chocolate and candy. So suck it, conversation hearts! 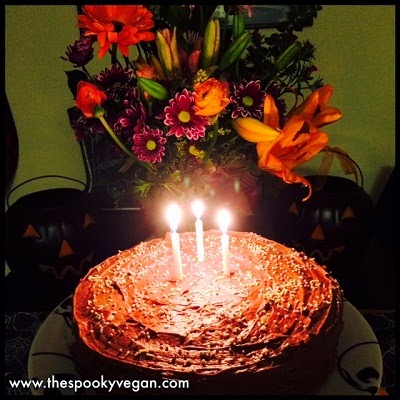 I celebrated my birthday last Friday, and since I had the day off for the New Year's holiday, I made myself a spectacular double-layer, double-chocolate vegan birthday cake! It was an easy, no-fuss one-bowl recipe from Minimalist Baker, and not only was it fast to make, but it was also delicious!!

Top 10 Horror Films of 2014, Plus Meh Movies and the Biggest Disappointments of the Year 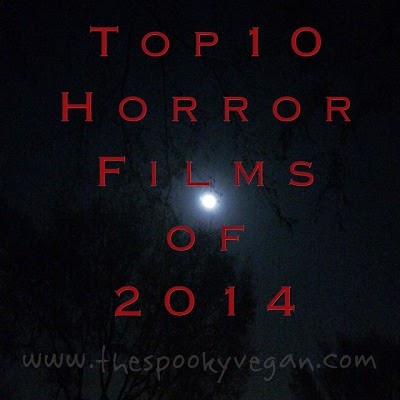 Happy New Year! Looking back, 2014 was a pretty stellar year for horror films, especially independent horror. There were tons of horror movies to check out (I still haven’t seen all the ones I wanted to), and for the most part horror movies seemed smarter and more original then they have been in past years.