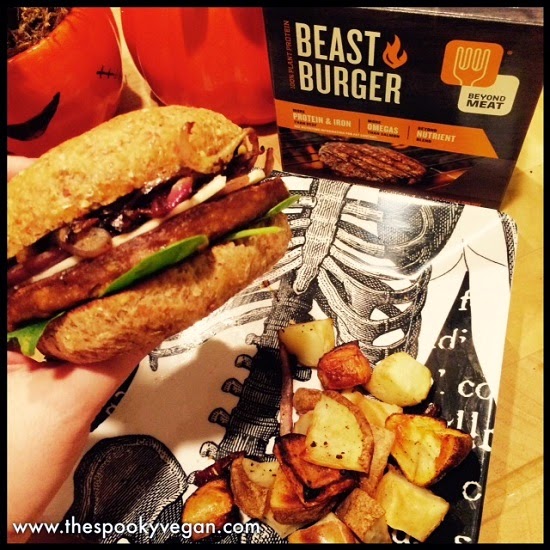 The Beast Burger and some oven-baked potatoes for a monster of
a dinner!

UPDATE: The New Beyond Burger from Beyond Meat has arrived! It's a real game-changer, and you can read my review and drool over pictures of it HERE!

Beyond Meat has unleashed its new creation, the Beast Burger, in stores nationwide! I've been excited about this burger since they announced it at the end of 2014, and I finally found the patties in the freezer section of my Whole Foods recently, so huzzah!

What's the big deal about the Beast Burger? Well, it aims to replicate the taste and texture of beef burgers to prove that there is a better, more sustainable, plant-based way to satisfy a burger craving! Beyond Meat shows us that there is no need to ruin the environment, our health, and kill animals for a juicy burger - all we need is a better vegan burger, and they think they have achieved this and even surpassed expectations by creating a more nutritious, more delicious plant-based burger!

Alright, let's get down to the details to see if this beast of a burger lives up to the hype!

Each pack of the Beast Burger contains two burger patties and will set you back about $7 at Whole Foods (please note your Whole Foods or other stores may vary on this price). A little on the pricey side for vegan burgers, but the patties themselves are pretty big - they are quarter pounder size. Plus, the nutritional value of the burger is pretty impressive - the Beast packs more protein and iron than beef (around 23 grams or 42% of the daily recommendation for protein!), more omegas than salmon, is packed with antioxidants, calcium and vitamins B-6 and B-12, plus a special nutrient blend. Not to mention the Beast is gluten-free, soy-free, cholesterol-free, and non-GMO! 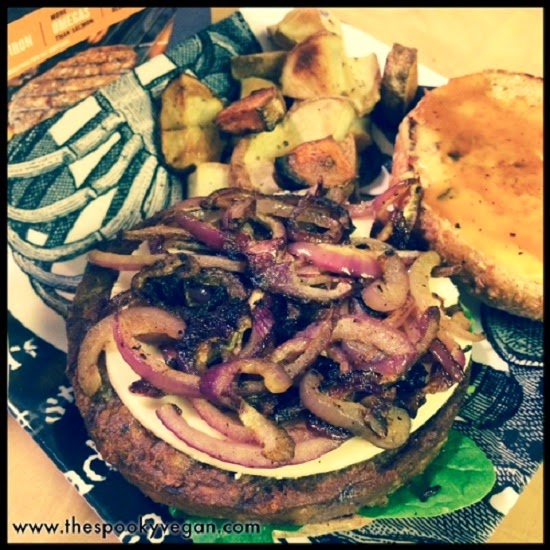 Beyond Meat Beast Burger on a bed of spinach, topped with Daiya
Provolone and grilled onions, on an Ezekiel whole wheat bun

I prepared my Beast Burger on a cast iron skillet with some onions and a tiny bit of coconut oil. I've read some reviews online where people complained about the burger being too dry, so I made sure not to overcook it (which is also a warning about overcooking on the preparation instructions, so consider yourselves warned!). I cooked the patty about 3 minutes on each side, and it came out perfectly. Before putting it on the bun I took a little nibble and was amazed that the texture so eerily resembled ground beef burger patties. Kinda freaked me out to be honest! The taste on its own was good, a little smoky and surprisingly flavorful by itself. 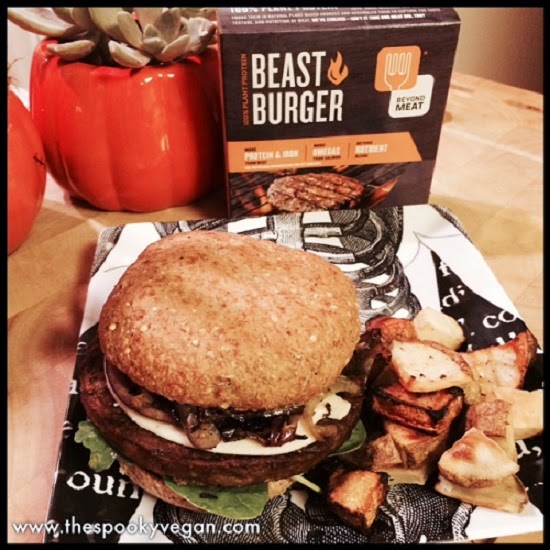 As you can see, the Beast Burger is truly beastly, and didn't quite
fit in the bun!

I put the Beast on an Ezekiel whole wheat bun slathered with Chipotle Just Mayo, added some spinach and topped it off with Daiya's Provolone slices and grilled onions. Inside the bun with all the flavors melding together it was damn tasty! I kept taking bite after bite after bite it was so good, even when I got so full!

Truth be told, I had heard so many people say this burger was just ok, so I wasn't expecting too much. However, after tasting the Beast Burger all I can say is that those people were so wrong and I'm so glad I tried it myself! It was juicy, delectable, and really fills you up (it's a big burger and I had a hard time finishing it!)! The Beast definitely left a lasting impression on me, and I can't wait to grill it up on the barbecue this summer and serve it to omnivores! The Beast is truly a vegan powerhouse that packs a big punch, so it is sure to impress if cooked right! 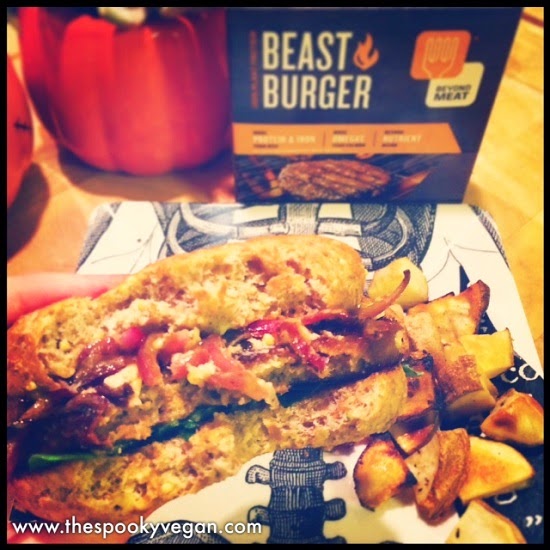 Nom! Could barely stop long enough to take a quick pic after I
started eating this delicious monstrosity!

Beyond Meat also has Beastly Sliders, which are smaller, snack-sized versions of the Beast Burger! Those would be perfect as appetizers at parties, horror movie nights, or just for a smaller snack sized burger for late-night cravings! YUM! Beyond Meat also has new Swedish Meatballs on shelves (I picked these up from Whole Foods, too, review to follow when I finally get to them), which I believe are the ones that will be served at Ikea this April (vegan meatballs at Ikea - it's a wonderful world we live in!).

Find out more at Beyond Meat!
Posted by Sarah E. Jahier at 7:30 AM