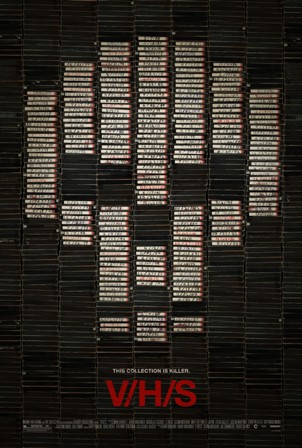 “When a group of petty criminals is hired by a mysterious party to retrieve a rare piece of found footage from a rundown house in the middle of nowhere, they soon realize that the job isn’t going to be as easy as they thought. In the living room, a lifeless body holds court before a hub of old television sets, surrounded by stacks upon stacks of VHS tapes. As they search for the right one, they are treated to a seemingly endless number of horrifying videos, each stranger than the last.”

Check out the trailer below or on Yahoo:


I am really stoked for this movie! I think that despite the fact that it is shot in the popular hand-held style it actually looks like it will bring something fresh, fun and scary to the horror genre. Plus, it features some of the most exciting up-and-comers in the horror genre today! I can't tell you how nice it is to finally be excited about a horror movie again!

What do you guys think?
Posted by Sarah E. Jahier at 7:36 PM