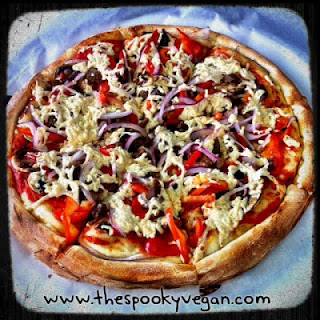 Did you know that the first ever all-vegan pizza joint has opened in Orange County? Sure, lots of places make an awesome vegan pizza (mmmmm, like Zpizza's Berkeley Vegan pizza), but the new Vegan Pizza in Garden Grove is different in that ALL menu items are vegan and they have lots of vegan fast food items other than pizza. We are talking pizzas, corn dogs, Buffalo wings, chili cheese fries, pastas and a variety of desserts! Woo hoo!

They opened a few months ago and I was finally able to go there last week to try some of their menu items. They are located in a strip mall off of Chapman Avenue in Garden Grove and while their surroundings might be humble, their vegan food definitely earns them some bragging rights!

The first thing I noticed on the menu was a vegan corn dog, which I just HAD to order! Their veggie dog is dipped in scrumptious batter and deep fried to crispy perfection. I can't remember the last time I had a corn dog, but I remember basically living off of them in my pre-vegan days of college. This cruelty-free version tasted just like how I remember them tasting, but better! The golden, crispy batter that enveloped the veggie dog was just to die for! 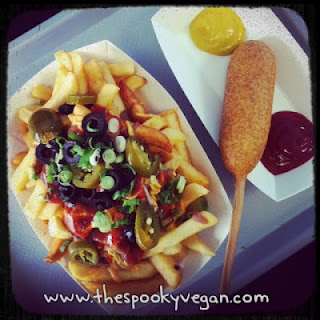 I also ordered the Chili Cheez French Fries and was surprised how big the portion size was! These fries were piled high with refried beans (not your traditional chili), vegan cheese, jalapenos, onions, sauce and olives. They were tasty but could have used a bit more sauce and/or beans.

Mister Spooky ordered the vegan Philly Cheez Steak pizza (pic above), which was really good as well (yes, I snagged a few slices). The crust was cooked just right - crispy and chewy. They were also generous with their toppings of bell peppers, onions and vegan cheese (pretty sure they used Daiya), though it could have used a bit more "steak". Still, it was definitely a tasty pizza pie and I can't wait to go back and try their other variations (like Greek, Mediterranean, Indian, Meat Lovers, etc.).

I got one of their vegan pastry puffs as a dessert, but it was more of a turnover rather than a pastry puff. It was good, but I wasn't blown away by it. Next time I'd like to try their chocolate cake!

They have a ton of other options, like pasta, sandwiches, salads and lots of sides...I can't wait to go back and try them all! 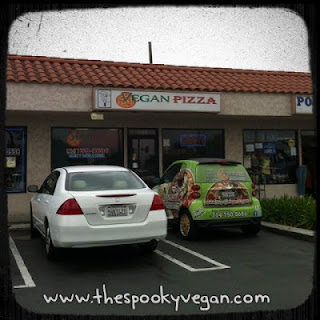 Vegan Pizza in Garden Grove...just look for their cute
SmartCar parked out front!

I also liked the service and the owners were really sweet and friendly! It felt very welcoming and they greeted you like family! They have several tables for eating in, or you can take your food to go. It's not fancy, but it is clean and inviting, perfect for grabbing some vegan comfort food!

I will definitely go back and if you are in Orange County I highly recommend checking out Vegan Pizza!

You can check out their menu and get more info on their website.
Posted by Sarah E. Jahier at 8:30 AM