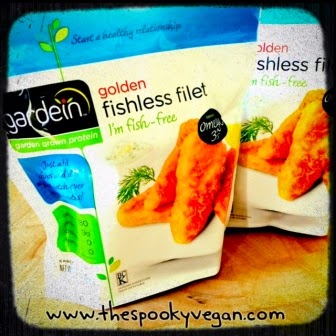 Do you remember how I (and so many others) raved about Gardein’s new Golden Fishless Filets when they debuted at Expo West (if not, here is a refresher!)? Well, I have been anxiously awaiting these golden nuggets of goodness to turn up in stores, and at the beginning of July Fresh and Easy started carrying them! I had already stocked up on Follow Your Heart’s Vegan Tartar Sauce (it was already anxiously awaiting the arrival of the filets at home), so I was all ready to have these little pieces of heaven back in my mouth again…I just hoped that they tasted as good as I remember them tasting. I first tried them a la “fish and chips” style – I baked them in the oven along with some tots, spritzed the filets with lemon, and tried them with vegan tartar sauce. OH MY! They were just as good as I remembered, even though I just baked them and didn’t have a deep fryer (they were served deep fried at the Expo). The flavor was weirdly close to what I remember fish tasting like – so close in fact that if you didn’t like fish in your pre-vegan days then you probably won’t like this cruelty-free version! I even tried a filet plain, and it was pretty darn good. I also prepared them by making fish(less) tacos. I took some corn tortillas, spread them with tartar sauce, nestled the filets in, then topped them with cabbage and fresh mango salsa. Again, so good! I used to love fish tacos back in my pre-vegan days, so being able to have fish(less) tacos that taste, look and feel like them AND are cruelty-free is really incredible!

I adored these Golden Fishless Filets, and could probably eat them at every meal, but I wanted to also get an outside opinion from an omnivore. Cue Mister Spooky! I had him try the filets both plain and prepared, and he loved them! I mean like REALLY loved them to the point where he was bragging about their tastiness to his omni friends (can we say SWOON!!). He said they tasted just like fish and while he thought they were missing that flaky flesh (ew) texture, they actually came pretty close. He was excited that he could buy these now and not buy actual fish (yay!).

I have only seen these Fishless Filets at Fresh and Easy, but I expect that they will soon be available at Whole Foods (if they aren’t already) or local health food stores. Gardein has a handy store locator on their site, so check it out to see which stores might be carrying this product in your area.

Then swim, don’t walk, to the store to pick up this delicious vegan product! It is definitely still one of my favorite vegan products from this year and I know I’ll be enjoying it for many years to come.