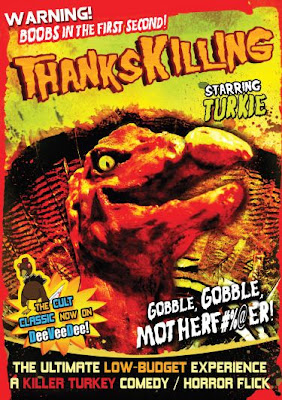 Horror fans don’t have many options when it comes to horror-themed Thanksgiving holiday movies. When Eli Roth’s faux Thanksgiving trailer was seen during the Grindhouse double-feature in 2007, interest in a feature-length Thanksgiving-themed movie only grew (hmmm...whatever happened to making a full-length feature out of the trailer, Roth?).

Well, now horror fans have another option with Thankskilling, and independent production from In Broad Daylight Pictures that was released in 2009. Thankskilling comes off as a wacky Troma film, filled with bad acting, ridiculous situations, silly one-liners and hell, a talking turkey! You definitely need a sense of humor to get through Thankskilling, just like you need one to get through seeing your relatives during the holidays.

Thankskilling is about a group of friends that drive home for Thanksgiving, but inadvertently find themselves and their community terrorized by a talking, killer turkey. The turkey was resurrected 510 years after a Native American placed a curse on the pilgrims after the very first Thanksgiving.

This is a campy, over-the-top film that is completely silly and isn’t to be taken seriously. The best parts are when the turkey is on screen…he is completely hilarious! There is even a part where he skins and wears someone’s face a la Leatherface in The Texas Chainsaw Massacre that’s pretty awesome! And take a look at some of the gut-busting lines he utters: “I’m gonna drink your blood like cranberry sauce” after threatening one of the characters or “You just got stuffed!” after raping a character or the infamous “gobble, gobble motherf*cker!”

Some situations are so unbearably stupid, though, that my disbelief was wayyy too suspended. For example, a dog peeing on the turkey’s grave resurrects him. Really? Writers Kevin Stewart and Jordan Downey couldn’t think of anything more creative than that to bring back the killer turkey? Or how unbelievably dumb the characters are in certain situations (hmmm if a turkey was wearing my dad’s face you’d think I’d notice!). I understand that this was the tone for the film and part of its appeal, but if you don’t enjoy horror-comedy hybrids that are this outrageous, you probably won’t enjoy Thankskilling.

For a low budget film, I really was impressed with the look of the killer turkey. Besides being hilarious, he also looked pretty awesome. I believe they used a puppet, and whenever he spoke it did indeed look realistic. The gory effects were pretty good too…I especially enjoyed when one of the characters ate the turkey and the turkey ate its way out through his stomach! The skinned face of one of the characters looked pretty realistic as well. And the turkey used an electric carver, a meat thermometer and other Thanksgiving utensils as killing tools! Unfortunately, there were some instances of CGI that were noticeable, but luckily these weren’t too numerous or distracting.

If you enjoy campy horror-comedies in the vein of over-the-top Troma releases, you just may count Thankskilling as one of your blessings this Thanksgiving. If those aren’t your thing, though, you way want to steer as clear of Thankskilling as you would dry turkey and nosy relatives!

Order it on Amazon