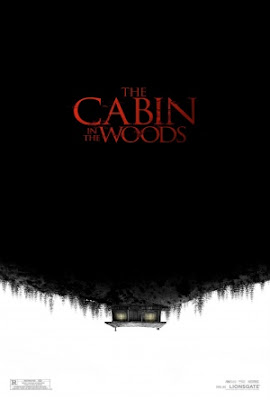 Despite being sick on The Cabin in the Woods’ opening night, I still bundled up and trooped out to the theater because there was no way I was missing catching this flick on Friday the 13th! It has been one of my most anticipated movies of 2012 as 1.) I’m a big fan of Joss Whedon and 2.) it actually looked like it would do something fresh and different with the horror genre.

There has been a lot of hype and build-up surrounding this film, and just today I saw tons of Twitter and Facebook updates proclaiming how "______" Cabin in the Woods was. I hate when flicks get spoiled by too much hype, so I tried to put myself on a social media lockdown for the day to avoid any spoilage.

I avoided any spoilers, made it to the theater and decided for myself just how "______" Cabin in the Woods was...

In the film, five college kids head to a remote cabin for some weekend relaxation, but soon find that things aren’t exactly what they appear. Together, they must discover the truth behind the cabin in the woods.

The best way to see this movie is with little or zero knowledge of it, so I'll keep this review short and to the point (and spoiler-free). The film is pretty much a horror fan's wet dream, as it cleverly plays with expectations, toys with horror clichés, tips its hat to many horror films AND adds something quite different and unexpected to the horror movie formula.

I laughed, I jumped, I rooted for both sides and completely reveled in the sharp writing by Joss Whedon and Drew Goddard (who directed as well). The Cabin in the Woods is one heck of an entertaining time from start to finish and left me with a big goofy grin on my face hours after I watched it. That's pretty much all you need to know, besides the fact that it has many different facets to its seemingly simple story.

If you’re a horror fan that enjoys smart, original and witty horror films, then I highly encourage you to check it out ASAP! It was totally worth avoiding the hoopla on Facebook and Twitter all day and sucking up a fever/sore throat to watch it opening weekend. Believe me, this is one film that actually lives up to the buzz surrounding it and is definitely one you don't want to miss!