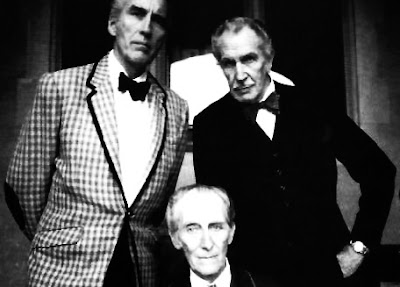 If you are a horror fan like me, no doubt these three actors have had a profound effect on you.

My first recollection of Vincent Price (May 27th, 1911-October 25, 1993) was seeing him in House on Haunted Hill and just being completely enamored of him! And who can forget his last, heartbreaking performance in Edward Scissorhands? Le sigh. Vincent Price is a personal favorite of mine, so I pretty much adore any film he is in, but some of my favorites include The Masque of the Red Death, The Abominable Dr. Phibes and Theatre of Blood.

Peter Cushing (May 26th, 1913-August 11th, 1994) is another huge name in classic horror and starred in many films over his career. My favorite film of his is The Hound of the Baskervilles, in which he starred as Sherlock Holmes with his best friend, Christopher Lee. I love how the two were best friends...it is really cute and heartwarming! They ended up starring in many films together (including 1958's Dracula aka Horror of Dracula). Peter Cushing was also the patron of the UK's Vegetarian Society up until his death.

Christopher Lee (born May 27th, 1922) continues to make films (the latest being Tim Burton's Dark Shadows and he will also reprise his role as Saruman in The Hobbit) and holds the Guinness World Record for most film acting roles ever (275 at last count according to Wikipedia). I dig him as Dracula in the Hammer films, but I especially love him as a heretic priest in To the Devil a Daughter as well as in The Hound of the Baskervilles, starring alongside Peter Cushing.

Join me in wishing these three icons of horror a very spooky birthday!
Posted by Sarah E. Jahier at 12:21 PM