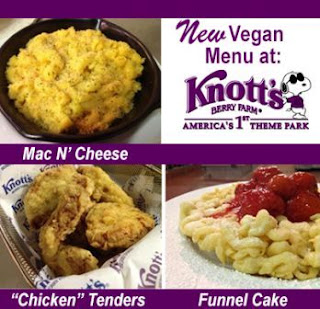 Credit should also go to Carolyn Scott-Hamilton, aka The Healthy Voyager, for working with the amusement park to develop vegan options of theme-park favorites! Thank you, Carolyn, for your amazing work!

I just read about this awesomeness this morning on Compassion Over Killing, but after a quick Google search it seems this once announced last month. Still amazing news, though, especially since Knott's Scary Farm is fast approaching! Maybe they will have some special Halloween treats veganized as well? I can only wish!

I'm not sure if all their vegan options have been rolled out yet...has anyone had a chance to try them yet? I can't wait to try the vegan funnel cake!

UPDATE: I haven't been to Knott's to try these options myself, but I've heard a lot of people say they haven't been able to find these vegan options in the park and that park employees have been less than helpful and seem clueless about vegan options. Not sure what the deal is, but I hope Knott's gets it together and becomes more consistent with their vegan offerings. If you visit the park and are able to locate any vegan options, let me know in the comments below! Good luck!
Posted by Sarah E. Jahier at 2:40 PM