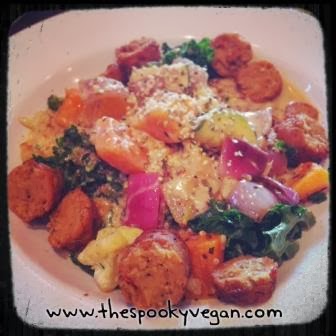 Veggie Grill introduced their new winter menu items this week, which include several new bowls, mini-wraps, regular fries, salads, nachos and more! I was excited to try their new items, so I got together with a few friends to have a family-style tasting! We ordered the Bombay Bowl, Harvest Bowl, BBQ “Steak” Sandwich, Mondo Nachos, Buffalo Mini Wraps, Mexi Mini Wraps and Yukon Gold Fries. We each sampled a bit of everything and were overall pretty pleased with everything we ordered. Below you’ll find a breakdown of each dish that we tried!


My favorite dish was the Harvest bowl, described on the menu as “Field Roast sausage, herb-roasted veggies, super grains, porcini mushroom and miso gravy, hemp seeds”. I've never met a Field Roast product I didn't like, and the sausage in this bowl really completed the dish. That, and the amazing gravy! Gravy makes everything better! This was a deliciously satisfying bowl and I would definitely order it again…I’m practically drooling just thinking about it! I also really loved the Mondo Nachos, which are corn chips topped with a taco blend, mashed avocados, VG-cheese sauce, jalapeños and soy cream. These were BIG and easily could have been an entrée. Their cheese was ridiculously melty and their “taco blend” of seasoned “meat” had just enough kick to amp up the flavor. We could not stop eating these! 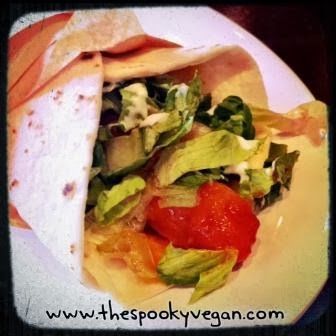 The mini wraps come in Buffalo or Mexi flavors, so we got both! The Mexi-Mini  (“taco blend, Mexican spices, avocado, lettuce, spicy sauce) was okay, but I much preferred the nachos. I did like the Buffalo-Mini (“Buffalo Chickin’ tender, lettuce, ranch dressing”) a lot, but I am a sucker for anything Buffalo flavored! I probably wouldn’t order again, since it is just one wrap per order and seem a little small for the price. 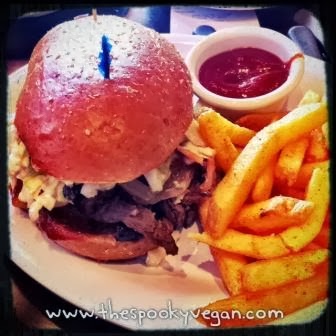 The BBQ “Steak” Sandwich was “veggie-steak in tangy BBQ sauce, caramelized onions, chipotle ranch, coleslaw” served on a wheat bun and came with a side (we picked the new Yukon Gold fries as our side). You can also get their sandwiches “kale style” (wrapped in kale leaves instead of being served on a bun), which I may want to try next time! Anyways, this sammie was good…the veggie-steak reminded me of the Riblets that Gardenburger used to make (I loooooved them when I first went vegan, but I think they have stopped making them now). I could have done with less coleslaw and more caramelized onions, though. The fries, though…WOW! So good!! They aren't just plain fries, they are seasoned to perfection, crispy and not greasy! I could've eaten a truckload of those fries!

The Bombay Bowl, which is “herb-roasted veggies, super grains, steamed kale, cannellini beans, cilantro/green curry sauce with coconut milk, almonds, hemp seeds”, was probably my least favorite item. It was a very mild, kinda bland curry, but while it tasted ok my main problem with it was the addition of the cannellini beans. I associate cannellini beans with Tuscan food, so it was weird seeing/tasting them in a curry bowl. Also, the dish should've used slivered almonds instead of whole ones (speaking of which, there were only a few paltry almonds in the bowl). I will say that the curry flavor intensified over time – I took leftovers home and by the time I ate them for dinner the bowl was more flavorful. Despite my misgivings, the bowl still tasted pretty good, so I’m not saying it’s gross or anything…it just wasn't for me.

Overall, I really enjoyed the new menu items we tried. I can’t wait to go back and try the other new items, which include a BBQ Tempeh Plate, Quinoa Power Salad, Herb-Roasted Veggies and more!

Check out the full menu and learn more at VeggieGrill.com!
Posted by Sarah E. Jahier at 7:30 AM