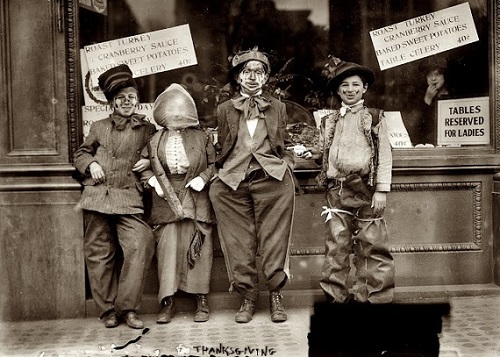 Costumed kids at Thanksgiving circa 1910-1915 (Library of Congress)

Did you know that Thanksgiving in the United States used to look a lot more like Halloween, complete with children going door to door in costumes begging for treats and elaborate costume balls? Before Halloween was widely recognized and celebrated in the 1940s and 1950s in America, Thanksgiving served as a time for kids to dress up in costume and go trick or treating. Read more about this "early Halloween" below...

It all started when Thanksgiving was declared a national holiday in the U.S. by Abraham Lincoln in 1863. To celebrate, people would throw masquerade balls and dress up on costume. All over the country, from Los Angeles to New York, newspapers featured stories of celebrants dressing in fantastical masks and veiled cloths. Thanksgiving masquerade balls were reportedly held from Cape Girardeau, Missouri to Montesano, Washington, and all points in between.

After that, kids decided to get in the spirit and dress up as beggars and go door-to-door asking neighbors if they had "anything for Thanksgiving", mimicking poorer inhabitants who would do the same. From there the tradition grew as the costumes became more elaborate and the tradition more widespread. Popular costumes of the time included birds and other animals, faces blackened with cork or coal, paper mache masks of famous politicians, leaders, or those that featured exaggerated (i.e. racist) facial elements of people from other nations, and gauzy, painted veils. Boys even donned the dresses, high heels, and makeup of their mothers and sisters. 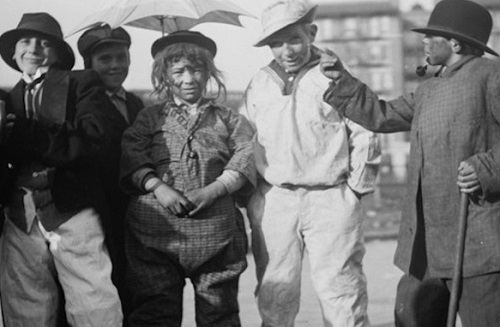 The tradition got so big that it became known as Ragamuffin Day around 1870. It continued to grow and by November of 1897 the Los Angeles Times reported that Thanksgiving was "the busiest time of the year for the manufacturers of and dealers in masks and false faces. The fantastical costume parades and the old custom of making and dressing up for amusement on Thanksgiving day keep up from year to year in many parts of the country, so that the quantity of false faces sold at this season is enormous."

Ragamuffin Parades became popular (especially in New York), and soon kids and adults alike were taking to the streets in costumes, going door to door, having bonfires, ringing noise-makers and horns, and throwing confetti. When children asked "anything for Thanksgiving" of their neighbors or those on the street, they would customarily receive pennies, candies, or apples in return. However, a backlash to the begging would follow - some even reported that pennies heated on a stove were handed out to children, scorching their fingers, in an effort to discourage this act of begging on Thanksgiving.

By the Great Depression of the 1930s, Thanksgiving begging had gone out of style. To discourage kids from "going ragamuffin" door-to-door on Thanksgiving, civic organizations organized costume contests and parades instead (leading to the founding of the Macy's Day Thanksgiving Parade), and by the 1940s Thanksgiving became the more family-oriented holiday and trick-or-treating had shifted to being exclusively done on All Hallows' Eve.

How cool is that? Even the most family-friendly holidays has ties with Halloween!