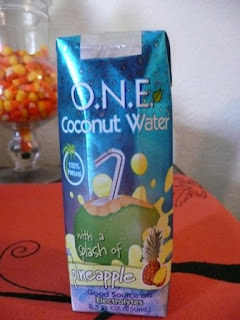 Refreshing O.N.E. coconut water
While grocery shopping the other day I was looking for a healthy treat to perk me up. I happened upon some O.N.E. Coconut Water and decided to give it a whirl. They had multiple flavors, but I decided on the pineapple one.

I hadn't tried coconut water before trying the O.N.E. brand, but had heard plenty of health benefits to the drink. For example, according to the O.N.E. website, their coconut water has "five essential electrolytes (calcium, potassium, phosphorous, magnesium and sodium), more potassium than a banana (15 times the amount of potassium as most sports drinks, without the artificial chemicals found in sports drinks.), no added sugars, no fat, no cholesterol, and no preservatives. Additionally, O.N.E. Coconut Water is a naturally sweet, low calorie, hydrating beverage."

O.N.E. Coconut Water has a clean, crisp taste with just a hint of sweetness. The addition of pineapple gives the drink a tropical punchiness without overpowering the naturally brisk taste of the coconut water. As soon as I started drinking the coconut water I felt refreshed and energized. I don't want to start sounding like an advertisement, but this stuff rocks! It left me feeling like I had really done something good for my body and was delicious to boot!

I bought it while it was on sale, for a dollar a pop, but even without the sale price I don't think one would cost more than $1.50. Not bad for a quick and natural pick me up! I'll definitely be picking some up on my next grocery trip!
Posted by Sarah E. Jahier at 11:10 AM