Quickie Reviews - What I've Been Watching This Summer 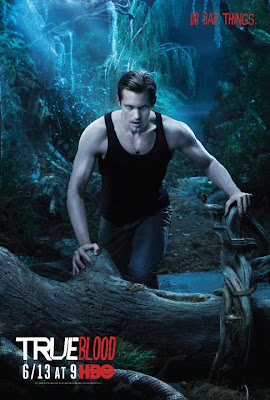 Alexander Skarsgard makes me want to do bad things
See, I told you I was back…and this time it’s with something I haven’t done in a loooong time! Movie reviews! I’ve been catching up on quite a handful of flicks over the summer (though it's less than my usual movie-watching volume), so I thought I would share some quick reactions to the movies I’ve seen. By no means are these reviews as extensive and thorough as I usually do (which is why they won’t be posted on Fatally-Yours), but I figured I just had to get down my reactions to the following films, no matter how short these quickie reviews are.

Let's get started, shall we?

Sucker Punch – I loved this movie! I don’t understand why it is so hated. Though I thought the battle scenes became a bit redundant, I really dug the set-up of this film and really connected with it. I loved how the movie tackled the theme of escape and how the mind deals with trauma. I also liked the female leads and brilliant imagery, including the costumes, makeup and sets. God, but the idea of retreating into your “happy place” as a mode of coping and the interpretation of “reality” the film presented REALLY got me and made me love it all the more! I really applaud filmmaker Zack Snyder (who did a stellar job with the Dawn of the Dead remake) for doing something different and giving us such a gorgeous, effective and tragically beautiful movie that packs a lot of punch (ha, no pun intended!).


Stake Land – I had been waiting to see this film for quite some time, and when I finally got my grubby mitts on it I was glad to see it doesn’t disappoint. Its post-apocalyptic setting and violent, feral vampires got my blood pumping, but it also had well-developed characters I actually cared about and its sub-plot dealing with a fanatical cult played nicely into the proceedings and gave it some extra oomph. Not even the casting of Danielle Harris, who I’m not a big fan of, acting-wise, dampened my enjoyment of this wonderfully dark film.


Deadtime Stories – Ok, so I figured since this was a “George Romero Presents” kinda anthology I figured I’d give it a whirl…BIG MISTAKE! The three stories included, one about cannibals, another about a mermaid and the third about vampires, where for the most part absolutely wretched. The first two segments were mind-numbingly awful…the first one was the worst, with a meandering story, bad editing, cheap effects and a just-plain-dumb “twist”. I had hopes for the second story, as I am a sucker for anything mermaid-related, but it just wasn’t set up properly and moved far too slowly with a lackluster ending. The third segment was the best of the bunch (though that isn’t saying much), which is to be expected as it was directed by Tom Savini. However, no matter how good the third segment was, it was overshadowed by the pure atrocities that were the first two stories. I have no idea how George Romero got suckering into endorsing (and appearing) in this anthology series, but steer clear!!


YellowBrickRoad – When I saw the trailer for this it looked okay, but nothing to get too excited over. And after watching it I can say the same. I appreciate that the filmmakers tried to do something different with this, and on a low-budget to boot, but a slow-moving story and a disappointing ending ruins an otherwise intriguing film. A very “meh” experience for me.


Season of the Witch – Going in I knew this film was probably going to be cheesy and/or awful, but I gotta say I didn’t hate it all that much. Sure, it wasn’t the greatest movie ever, but it did have its charming moments! I especially loved seeing Robert Sheehan, who was on the British superhero show Misfits (a show I’m currently obsessed with ever since they started airing it on Hulu), as one of the main characters. Ron Perlman was fun to watch and Nic Cage…well, was Nic Cage! The ending was a bit cheesy and the pacing dragged in a few spots, but overall I didn’t mind spending 2 hours on this flick.


Hobo with a Shotgun – Another film that was on my “must-see” list, but unlike Stake Land, Hobo with a Shotgun was a total disappointment for me. Overall I found it a bore and too mean-spirited for my liking. I know the filmmakers were aping the great exploitation flicks of the ‘70s, but besides the crazy title and violence it didn’t feel like those films at all to me. I think I’ll stick to my Street Trash instead of this cheap one-gimmick pony, who basically has nothing going for it except for a cool title and a decent performance from Rutger Hauer.


[REC] 2 – I really enjoyed the original [REC] so I was stoked to check out the sequel. It was a pretty decent flick…a little more of a first-person-shooter feel, but fun nonetheless and enjoyed learning more about the “origin” of the “virus” that made everyone in the quarantined apartment building turn all zombie-like. I also liked that it went a different direction than I expected it to. If you enjoyed [REC] I highly recommend checking this out. Just stay away from the BS American remakes.


Red Riding Hood – Ok, so even though this looked like a Twilight (or Twatlight, as I like to call it) –esque werewolf movie, I decided to give it a chance as I am a sucker for fairy tale-based movies. Yawn. This movie was a snooze…there’s not much I remember from it except for the tiny thread relating it back to the original fairy tale. Not recommended.


True Blood Season 3 – I love this series and watched season 3 all the way through as soon as I could get the DVDs. I enjoyed how different characters were focused on, especially LaFayette (one of my favorite characters) and Tara. And I can NEVER get enough Eric (Alexander Skarsgard…DROOL!!!). Frankly, I find Sookie to be annoying and Bill to be a bore, so I’m glad they decided to branch out and focus on a few other characters. I’ve read the books, so I knew what was coming (though the show differs from the books), so I wasn’t surprised when they revealed what Sookie really was…I’m just glad they included Claudette (a big character in the books) and hope I see more of her and other new characters (Alcide!) in season 4 (which, BTW, I’ll have to wait another year to see since I don’t have cable).


The Rite – Another forgettable movie, one featuring Anthony Hopkins and exorcisms. Though I loved the Italian setting of this film, I wouldn’t recommend it as I’ve already forgotten much of what transpired in the story.


Rubber – An interesting and oddly brilliant little film, but one that most won’t “get”. Very avant-garde, often breaking the fourth wall and with a definitive message that pokes a lot of fun at society. Quirky, odd, but again, not for everyone. Check it out if you enjoy experimental cinema.


Drive Angry – I can’t believe how much I enjoyed this film! It packs a lot of different genres/themes into one film – action, supernatural, road movie, revenge – but it all works to create one batshit insane piece of movie magic! One of Nicholas Cage’s best films to date, and while I’m not a big Amber Heard fan, this is the film that actually made me like her! I usually don’t purchase too many movies these days (with Netflix and Hulu, who needs to?) but this one is going to the top of my “must-buy” list!


Other flicks I’ve seen recently include Tangled (so cute!), The Story of Ingrid Newkirk and PETA (inspiring and moving documentary if you are an animal-lover), Autopsy: Post Mortem with Dr. Michael Baden (I’ve read his autopsy book, but this documentary was focused on famous cases and very interesting from a forensics point of view), The Adjustment Bureau (a nice little mindbending movie with Matt Damon), Somewhere (I love Sofia Coppola’s The Virgin Suicides, but this one was a real snooze) and Urban Explorers: Into the Darkness (a cool documentary about urban exploration).
Posted by Sarah E. Jahier at 4:31 PM