Last month I signed up for the coolest thing I had ever heard of...Lollihop, which is a monthly subscription of SNACKS!! That's right, every month you are sent a new box of tasty snacks! And these aren't your everyday run-of-the-mill snacks, either. The snacks included in each box are handpicked, organic and healthy! Plus, they also have an option for a vegan snack box! Woo hoo!! 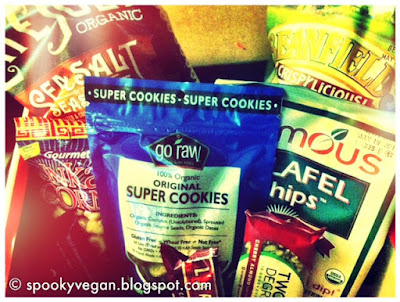 Of course I immediately signed up because that sounded like all kinds of heaven to me!

This past week, I received my very first Lollihop box! Unfortunately, I learned this will also be my last snack shipment for a while as the company is pausing memberships so they can make improvements to their service. Maybe it's just my snack exhilaration talking here, but I think these boxes are super-cool as-is! 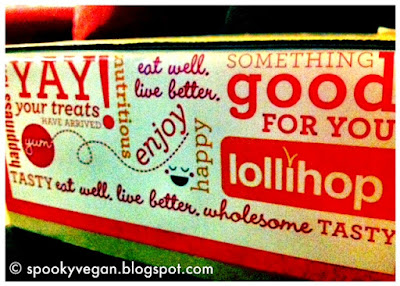 Here is what was included in my vegan subscription snack box:
The first thing I tried was the Go Raw Original Super Cookies. Made out of organic coconut, sprouted sesame seeds and organic dates (yup, that's it!) these were subtly sweet and had a slight crunch. I only needed a few and they satisfied my sweet tooth! And they were a whole lot healthier than the junk food I usually eat!

Beanfields Bean and Rice Chips in Sea Salt called to me next. These were surprisingly light and crispy, though I didn't get much sea salt flavor in these. However, they were quite tasty and I especially like that they boast that a one-ounce serving has 4 grams of protein and 4 grams of fiber—twice as much as most other tortilla chips, corn chips, or potato chips. I can't wait to try these with some salsa or dip!

The Inka Corn tasted just like the Corn Nuts from my childhood, but the puffs of corn were much bigger and they definitely didn't feel as greasy! Win-win! These were a great treat!