Horror Movies I'm Most Looking Forward to in 2013

At the beginning of every year I like to make a list of upcoming horror movies I'm looking forward to that year. I'm a bit forgetful, so a list is essential for me to stay on top of new releases! I'm a little late in making a list this year (I blame it on a crazy January full of traveling, illness, birthday celebrations and playing catch-up at work), but I made one nonetheless to keep me on track this year.

Please note that I've grouped films by release month, but that these are only approximate and may change. I've also seen some films already released this year (like Mama - which was a solid effort but missing something I can't quite put my finger on), so I have not listed these below. 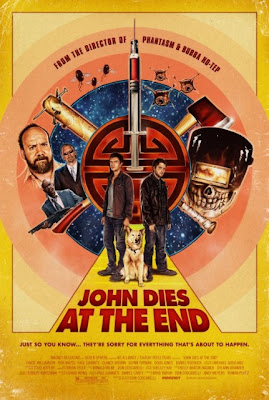 John Dies at the End - "Just so you know...
they're sorry for everything that's about to
happen"

John Dies at the End (limited theatrical run/VOD release) - I absolutely loved the trippy book (read my review on my archive blog) and I've been looking forward to this film for quite some time, especially since Don Coscarelli (Bubba Ho-Tep, Phantasm) wrote and directed. Can't wait to take this trip! 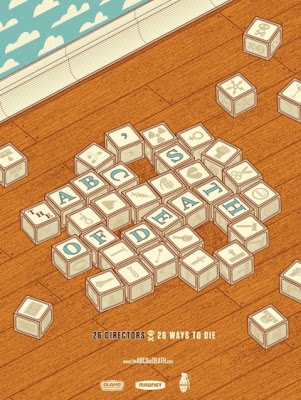 The ABCs of Death (VOD release, will be released theatrically in March 2013) - 26 short horror films by 26 different directors from around the world...how can a horror fan NOT be interested in this anthology?! I've been waiting for this one to be released for a loooong time and really cannot wait to watch it. Though I might hold out until it is released theatrically in March so I can see it on the big screen! 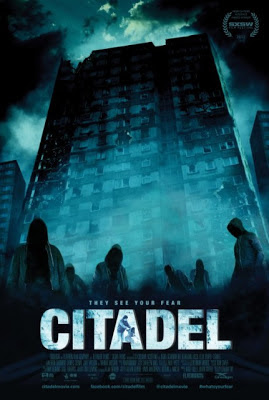 Citadel - "They see your fear"

Citadel (DVD and VOD release) - This film finally got a U.S. DVD/VOD release this January. I have been hearing good things about it for a while now, but truth be told the trailer doesn't make it look like anything special. I'm hoping the good buzz pans out and my perceptions based on the trailer turn out to be wrong. 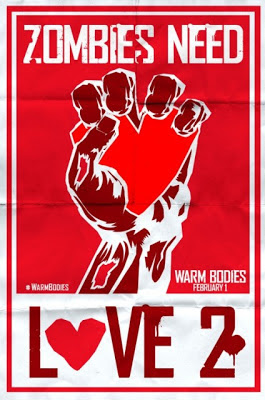 Warm Bodies (theatrical release) - At first I was not interested in this film at all. The trailers made it look ok, but I still wasn't convinced. However, once I heard some positive reviews from people I trust, my interest was piqued. I've heard it is a fun, quirky film that offers a different perspective on the zombie subgenre. Hmmmm...may have to check it out now! 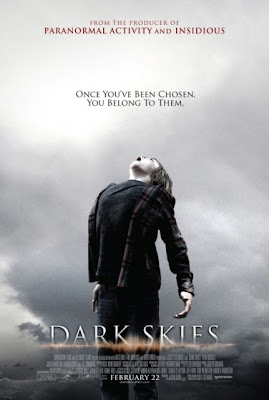 Dark Skies - "Once you've been chosen, you
belong to them"

Dark Skies (theatrical release) - I don't really like Keri Russell, and the trailer makes it look a little ho-hum, but I have to admit I'm still kinda intrigued by this movie. It looks like it could be creepy...but then on the other hand it looks like it could be lame and generic. Trying to stay cautiously optimistic for this one. 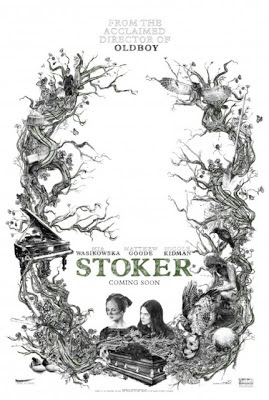 Stoker (theatrical release) - Not too sure if this is considered “horror”, but nonetheless it looks like a beautifully dark movie full of mystery, murder and intrigue. Plus, it is directed by Park Chan-wook, who has directed Oldboy, Sympathy for Mr. Vengeance, Lady Vengeance and Thirst – all movies I've loved. If nothing else I expect a solid psychological thriller. 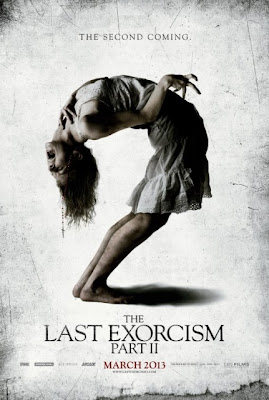 The Last Exorcism Part 2 (theatrical release) - For the most part I enjoyed The Last Exorcism and judging from the trailers I like where they are taking the story for Part II. I like how for the second installment they are ditching the handheld cameras and following the lead character (it still freaks me out how much she looks like Michael Cera with a wig) as she tries (and fails) to adjust to “normal” life after her ordeal. 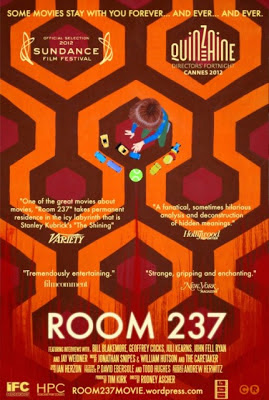 Room 237 (DVD) - This is a documentary examining the hidden meanings in Kubrick’s The Shining. I remember discussing The Shining’s motifs, editing “mistakes”, structure and what Kubrick meant by all of it in film class, so the film nerd in me is eagerly awaiting this documentary that examines several theories about one of my favorite horror films. 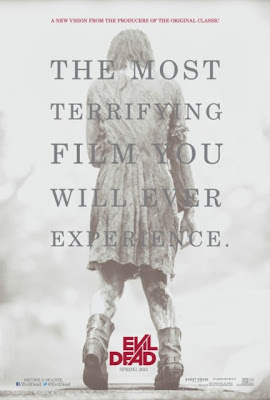 Evil Dead (theatrical release) - I was pretty much opposed to this remake when I first heard about it, but after seeing the trailers I've changed my mind and actually WANT to see it (despite the poster's rather pompous proclamation that it is "the most terrifying film you will ever experience"). I also appreciate that the filmmakers have stated that practical effects are used instead of CGI in keeping with the original’s DIY attitude. Now if only it would be released with its originally-awarded NC-17 rating instead of chopping it down to an R-rating (I'm hopeful the uncut version will be eventually released on Blu-ray/DVD)! 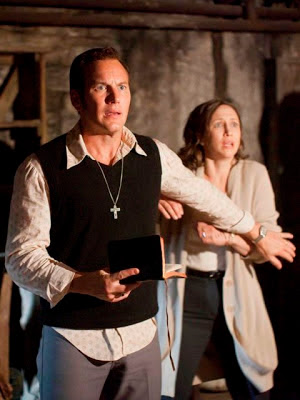 Still from The Conjuring with Patrick Wilson
and Vera Farmiga

The Conjuring (theatrical release) - I am a sucker for anything ghost/haunted house/paranormal related and James Wan directed (since his slam-dunk Insidious), so I'm looking forward to this flick, about paranormal investigators called to help a family in a secluded farmhouse who are being terrorized by a dark presence. 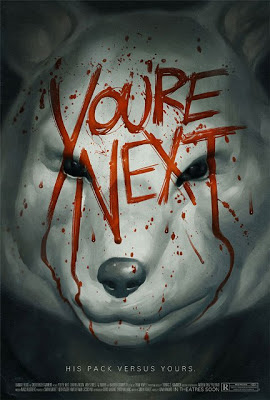 You're Next - "His pack versus yours"

You're Next (unknown release format) - This 2011 film is FINALLY getting a proper release (though I'm unsure whether it is limited theatrical or DVD/VOD)! Director Adam Wingard directed Pop Skull and A Horrible Way to Die, both of which I enjoyed, so I am looking forward the the home-invasion horror of You're Next. 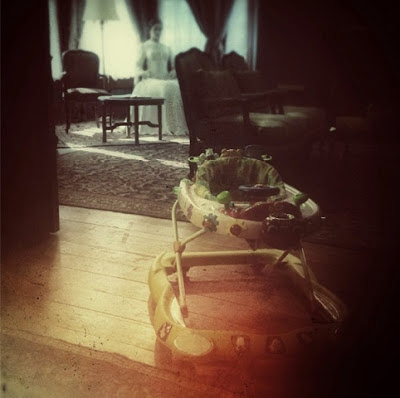 First still from Insidious Chapter 2, courtesy of
director James Wan's Instagram (check out the lady in
the background, who I missed when I first saw this!!)

Insidious: Chapter 2 (theatrical release) - I absolutely adored Insidious (see "slam-dunk" comment above), so I am very, very excited for Chapter 2, which picks up right after the first film ends. 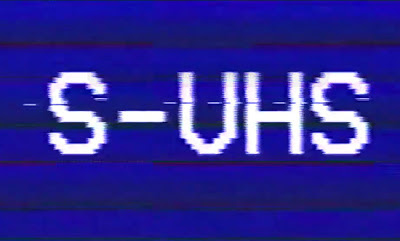 S-VHS - I was a fan of V/H/S despite some of its segments falling flat, so I am readily looking forward to its "sequel", which will again boast various shorts for different filmmakers, including Simon Barrett, Adam Wingard, Gareth Evans, Eduardo Sanchez, Gregg Hale, Jason Eisener and Timo Tjahjanto. I'm hoping S-VHS will be full of the same WTF craziness, fun and variety as V/H/S. 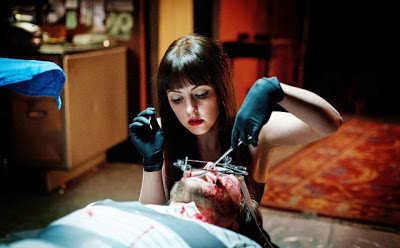 American Mary - The Soska twins (Dead Hooker in a Trunk) are doing amazing things in the horror genre, so I am very excited to check out American Mary, which stars the stunning Katherine Isabelle (Ginger Snaps) as a disenchanted medical student. The film was already released on DVD in the UK (lucky bastards), but for us here in the U.S. no release date has been announced yet.


I know I've probably missed a few horror films in this list and I've no doubt that this list will grow as we move further into 2013 and more films' release dates are announced.

What horror films are you looking forward to in 2013?
Posted by Sarah E. Jahier at 8:30 AM