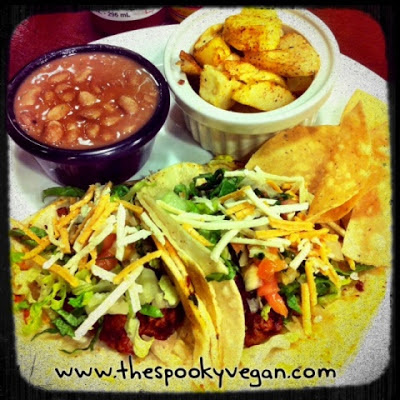 This small restaurant is located on the busy hub of Harbor and 19th in Costa Mesa, just a block from the end of the 55 freeway. I discovered it by chance while searching for new food places and since it was so close to our house Mister Spooky and I decided to give it the old college try.

Though the restaurant serves standard meat- and cheese-filled burritos, tacos, etc., I was delighted to find that Tacos Cancun is vegan-friendly and even serves Soyrizo, soy ground “beef” and Daiya cheese! So Mister Spooky (who is not vegan) and I (vegan, obviously), could eat at the same place and both be happy!

One chilly evening we arrived at the cozy restaurant and were greeted like family. The staff was very friendly and knowledgeable about the vegan options. Menu items were also marked with a “V” if they could be made vegan. Basically, you could replace the meat protein with a plant-based protein in most of the taco and burrito dishes and the dairy cheese would be substituted with Daiya. They also have the option of subbing veggies or potatoes for the protein. Other veganizable dishes include their enchiladas, tortas, quesadillas and salads.

In chatting up the friendly woman behind the counter I learned that the chef was vegan and insisted on providing vegan-options to his guests. It is so rare to find someone from Central America (where the chef is from) that is vegan so I was mightily impressed and very thankful he decided to open a restaurant with vegan options! 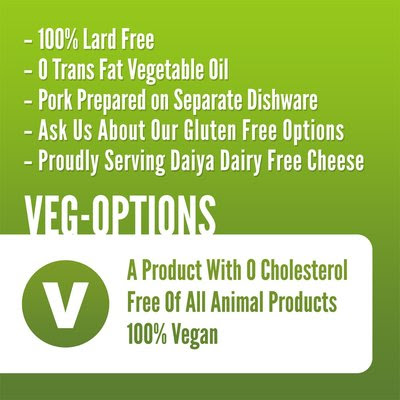 I ended up ordering a Cancun Combo that came with two tacos (I replaced the meat with Soyrizo and the dairy cheese with Daiya cheese), a side of pinto beans (vegan!) and crispy potatoes (the rice is not vegan). The tacos were double-wrapped in tortillas and stacked high with Soyrizo, pico de gallo, lettuce and two types of Daiya. OMG…they were seriously heavenly. The tortillas were warm and soft, and the toppings had just the right amount of spice to them. I also loved the sides of pinto beans (I can’t remember the last time I was able to eat pinto beans in a restaurant…thank goodness Tacos Cancun has some sense and doesn’t use nasty lard!) and the potatoes! I would have been full on one taco plus the sides, but I cleaned my plate – that’s how good it was!

Mister Spooky went a little nuts and ordered the asada fries, cheeseburger, and street tacos. Yes, he is a big dude. The asada fries were HUGE and he could have easily been satisfied with those! He plowed through the fries and loved them! He said the street tacos were also really good. He was so full he had to take the cheeseburger to go. It’s a rare thing he can leave a restaurant completely full and satisfied (and with leftovers!), but Tacos Cancun was able to accomplish this!

One thing to note – space is limited and there are only about five tables in the joint, so keep that in mind if you go during peak hours. Other than that, it is a neat, clean space with an inviting atmosphere and awesome staff!

When we left we profusely thanked the chef and his staff since we had such a great experience here. We will definitely be back…I want to try everything that can be made vegan!

If you are in the Orange County area, I highly recommend checking out Tacos Cancun! 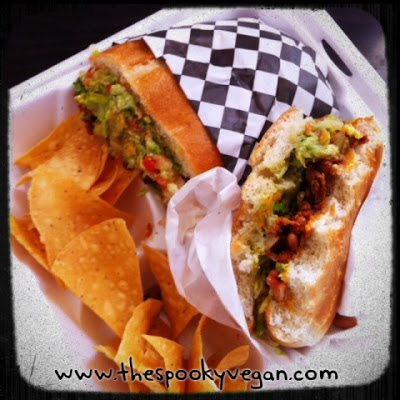 UPDATE: I went back and tried the vegan Cancun Torta. I had never had a torta, but it’s kinda like a Mexican sloppy Joe…beans, veggies, Soyrizo, guacamole in a hamburger-like bun. It was only $5, but it was so big I could only eat half of it! Plus, it was delicious!