Vegan Donuts at The Donuttery in Huntington Beach, CA 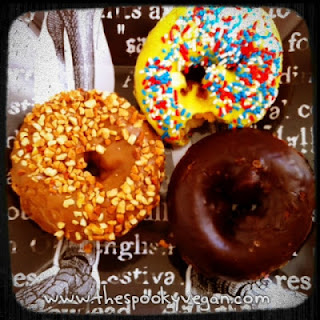 This little hole-in-the-wall donut shop off Beach Boulevard in Huntington Beach now carries vegan cake donuts (and raised donuts as of February 2015), woo hoo! I can't remember the last time I had a donut, so as soon as I heard this place was carrying vegan donuts I hightailed it over there to get my paws on some cakey deliciousness.

As soon as I walked in to the establishment I was greeted by the lovely sight of a sign that read "We now serve Vegan donuts" and rows and rows of vegan donuts. Woo hoo! 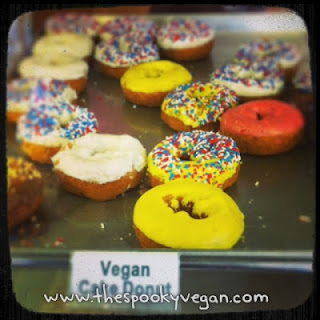 I chose three cake donuts to try - a lemon-glazed one with sprinkles (please see the update below - the sprinkles used at The Donuttery are NOT vegan!), maple-glazed one sprinkled with nuts and a chocolate glazed one. I am not sure what I was expecting, but certainly not the deliciousness my mouth was greeted with! All the donuts had the perfect cake-like consistency and the glazes were divine. They were sweet without being overpowering and they tasted just like I remember donuts tasting. My favorite was the lemon-glaze one because it was sweet and tangy. Mmmm mmmmmm mmmm!!

The Donuttery is open 24 hours a day, so if you are in the mood for vegan donuts at 3 AM and live around Huntington Beach you can get them! Score!

The Donuttery is located at Beach Boulevard and Slater Avenue and also carries a variety of non-vegan donuts, coffee drinks, salads and sandwiches (I didn't see anything vegan-friendly on their food menu, though).

UPDATE #1: Someone has brought to my attention that the sprinkles used on the vegan donuts ARE NOT vegan! The sprinkles contain confectioners glaze (i.e. crushed up bugs) and therefore are not vegan. The donuts themselves are vegan, though, so you could order the ones without sprinkles.

UPDATE #2: The Donuttery no longer uses non-vegan sprinkles on their vegan donuts and has better educated themselves on vegan ingredients, so you are free to enjoy all their vegan donuts! They now also carry RAISED vegan donuts, vegan donut holes and vegan bars!
Posted by Sarah E. Jahier at 9:00 AM