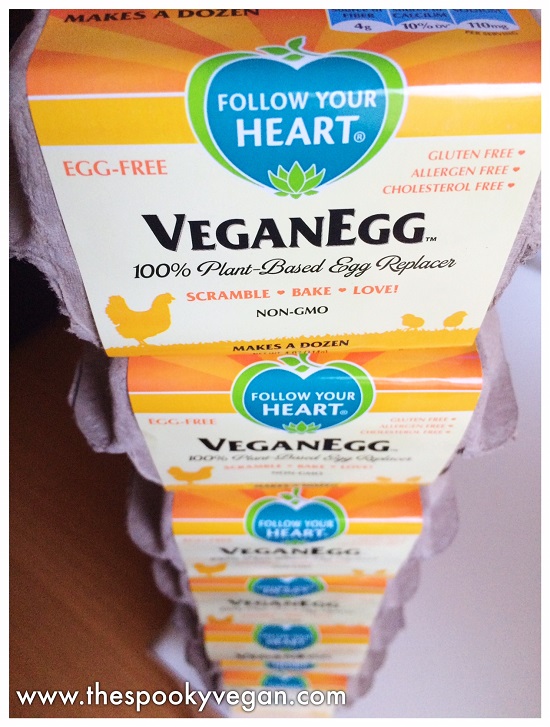 I finally got around to trying Follow Your Heart's new VeganEgg over the long Thanksgiving holiday, and lemme tell you, the hype is real! I basically ate "eggs" all weekend long thanks to this amazing new product! Its base is algal, which is derived from algae, and it is this substance that gives it the unique, egg-like texture. The VeganEgg comes in a cute little biodegradable egg carton. Inside the carton is a packet of powder that, when mixed with water, makes the VeganEgg! You just mix powder with water per the directions, and each carton makes approximately a dozen "eggs".

The first thing I made with the VeganEgg was scrambled eggs! Of course, vegans have been enjoying tofu scrambles in place of scrambled eggs for a long, long time, but, while delicious, the fluffy egg texture was never really replicated with tofu, so I was really looking forward to trying a scramble with the VeganEgg! I followed the directions on the VeganEgg box and mixed the powder with ice cold water (I chilled some water in the freezer for 20 minutes beforehand) and mixed it all together with an immersion blender. I then poured the VeganEgg mixture to a pre-heated cast iron skillet, then scrambled it, adding a dash of pepper (the VeganEgg mix is pre-seasoned with salt and nutritional yeast). I cooked the VeganEggs for 6 to 8 minutes per the directions, then at the last couple of minutes I added some Kala Namak Black Salt, which gives it more of an eggy flavor. I topped the scramble with ketchup and served it with some Field Roast Apple Maple sausage, tempeh bacon, and fresh berries. 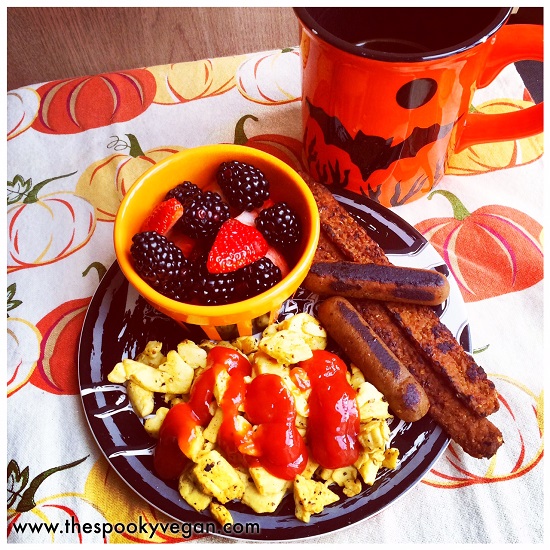 My very first VeganEgg scramble! Topped with ketchup and served with vegan
sausage, bacon, and fresh berries, plus black coffee.

The texture of the scramble was spot-on! So much so that I was a bit taken aback at first by how egg-like it was! They were fluffy just like I remember chicken eggs being and the Kala Namak Black Salt I added really brought out the eggy flavor!

I enjoyed the VeganEgg as a scramble several times - it was easy to follow the directions, even though I was a bit nervous making it the first time. It came out great every time and my technique improved every time I made it! Next, I tried my hand at making an omelet with the VeganEgg... 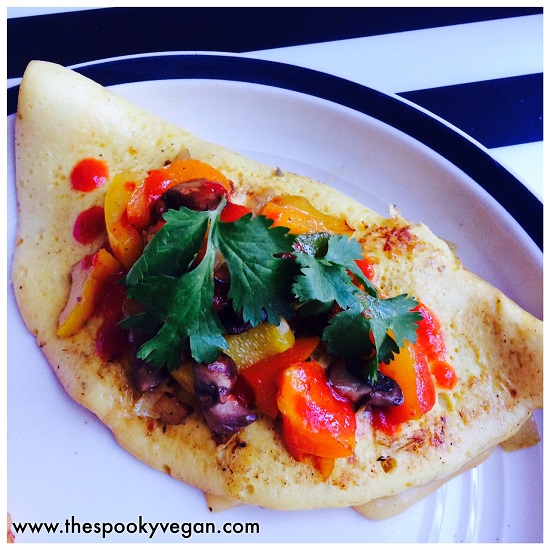 OMG, a vegan omelet made using the VeganEgg!

I prepared the the VeganEgg mix as I did for the scrambles, and poured into a pre-heated cast iron pan. I let it cook on one side for 4 minutes or so (until the bottom was lightly browned), then carefully flipped it. After the other side was lightly browned, I used a spatula to fold it in half. Now, keep in mind, I've never made an omelet in my life (not even in my pre-vegan days), so I kinda winged it from here! I added some sauteed onions, mushrooms, and bell peppers along with some slices of Follow Your Heart vegan Provolone cheese into the fold, then turned the heat down to low and cooked until the cheese was melted and the two sides of the omelet kinda stuck together. I topped the omelet with more sauteed veggies, a drizzle of sriracha, and some cilantro. 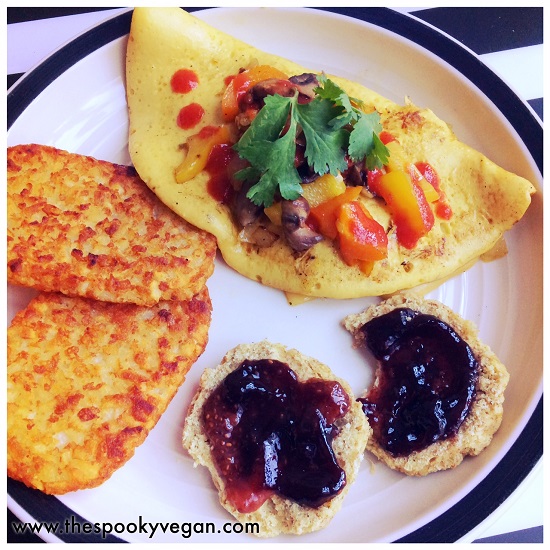 I was blown away by the texture of the omelet! Like the scramble, it was fluffy and airy and was such a crazy good replication of chicken eggs. It was almost too close to the "real" thing! I enjoyed it with some hash browns and jam-topped biscuits. So insanely good!

The Follow Your Heart VeganEgg is a major game changer! I cannot wait try the VeganEgg in other dishes like frittatas, quiches, not to mention baking! With this, hopefully more people will ditch eggs and embrace this cruelty-free, compassionate vegan product. You can find the VeganEgg online at Amazon (it seems to keep selling out, but keep checking back for when it is restocked!) and other retailers - a full list of where you can buy the VeganEgg, along with more information on it, is available on Follow Your Heart!

And here are a few tips I learned when making the VeganEgg that may help you: