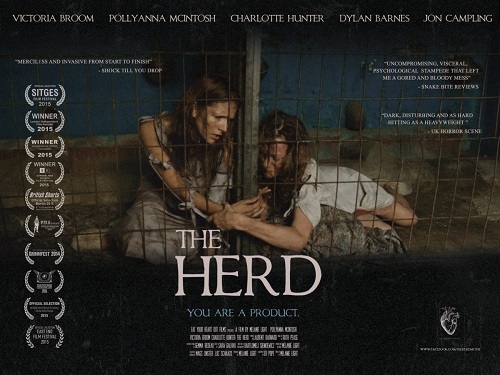 I recently watched the horror short The Herd, which has been dubbed "the first feminist vegan horror film", and I was absolutely blown-away! It is such a visceral, disturbing short film from the talented Melanie Light (I previously reviewed her short film Switch on my old horror site - an archive of this is available HERE). This short comes at a perfect time, as February is Women in Horror Month (in past years I covered this awesome event on my old horror site - full archives of these articles are available HERE)!

In the short, young women are imprisoned in dirty, small pens, artificially inseminated, and when they give birth they have their newborns ripped away (male babies are simply discarded in a trashcan to die, females are kept alive, but raised to suffer the same fate as their mothers), are poked and prodded, tortured and taunted by their captors, hooked up to milking machines, and when they are unable to produce babies and milk, killed. It is horrifying how these women are treated, and early on you develop a seething hate for their tormentors. Who in their right mind would treat a human being this way? If you expand that thinking a bit more, you may ask, who would ever treat a sentient being that way?? Shockingly, this kind of treatment happens every single day to dairy cows.

That's right, for your dairy milk, cheese, butter and other products cows face this nightmare every single day. They are routinely raped and artificially inseminated (did you know to produce milk that cows must be kept pregnant? It seems like an obvious fact, but a lot of people aren't aware of this). When they do give birth, their newborn babies are ripped away from them. Cows, like all animals, have strong maternal instincts and will fight to protect and be with their baby, and also mourn if they are taken away from them. It is heartbreaking that their babies are taken away and either raised as dairy cows (if they are female) or live a short life where they are killed outright or live a few months until they are killed for veal (if they are male).

The cows that are now producing milk meant for their babies are hooked up to milking machines (the milking machines usually harm the cows as well, cutting them and causing them pain, which results in a lot of pus and blood in dairy milk). They also get sick a lot, which is why their are pumped full of antibiotics, not to mention the hormones to make them produce more milk (all which end up in dairy milk, along with pus and blood).

Then the whole vicious cycle of impregnating cows, stealing their babies, and stealing their milk continues until the cows are no longer able to become pregnant or produce milk. A cow's natural lifespan is 15 - 20 years, but in the dairy industry they usually last no more than 4 years. At that point, the cow is sent to slaughter. This doesn't happen only to cows either, but the same atrocities are faced by goats as goat milk has gained in popularity, and egg-laying chickens face the same cramped, disease-ridden, psychologically stressful, and painful situations that cows do, not to mention any animal raised for consumption (pigs, cows, sheep, turkeys, chickens, etc.). So while you're ditching dairy, ditch eggs and meat, too.

The same practices exist in "humane" or "pasture-raised" dairy farms, which are labels that really mean nothing since the animals still suffer. The image of "happy cows" depicted in ads are outright lies, and while there may be small dairy farms that claim to treat their cows like "family", know that in the end the cows suffer the same fate and are still treated like commodities rather than sentient beings.

All this disgusting, horrifying behavior just for dairy products, which are awful for people anyway (despite the deceptive ad campaigns run by dairy councils). It's maddening and completely unnecessary, which is I stopped using dairy products years ago. No sentient being should be a product! And there are so many fantastic alternatives nowadays, there really is no excuse for drinking milk from other species.

The parallels The Herd draws between female humans and female cows are eye-opening, shocking, and will hopefully make people question their food choices. Also clever is how this film briefly questions how so-called feminists can truly be feminists if they still consume dairy products. Why support subjugation of any females, even if they are a different species? That's like women attacking women! Just more food for thought this film asks you to question...

The good news is that dairy alternatives are widely available! You can easily replace dairy milk with cruelty-free milk from plants and nuts! There are so many non-dairy milk choices, from soy to rice to almond to coconut to hazelnut to cashew to hemp milks! So many choices you are able to try before settling on a favorite (I looooove hazelnut milk and coconut milk!). And it's not just milk - there are cruelty-free alternatives to butter, creamers, cheeses, and so on - and they all taste better than dairy-based products! My faves include: Earth Balance butter, Field Roast Chao cheese slices, Daiya cheese shreds, Miyoko's cheeses, Violife cheeses (available in Europe, and hopefully the US soon!), So Delicious ice cream, Califia Farms coffee creamers, milks, Tofutti and Kite Hill cream cheeses, and tons more! Ditch dairy and go cruelty-free, it's easier than you think, as many of the vegan brands mentioned above are available in regular ol' grocery stores. If you need any help or specific recommendations, let me know! I'd be happy to help - and I have lots of food reviews you can browse for recommendations!

I am so excited that there are daring horror films like The Herd being made, and I hope you will give it a viewing below (or HERE) and perhaps think about your food choices as well!

The Herd from Melanie Light on Vimeo.
Posted by Sarah E. Jahier at 9:00 AM