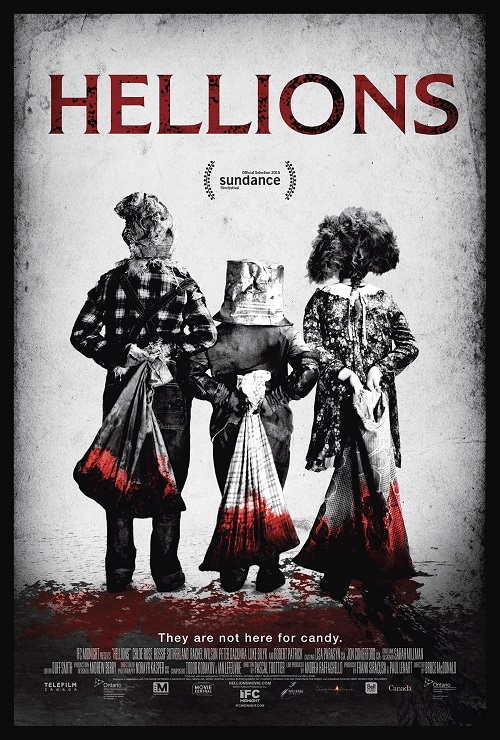 As soon as I heard this movie was set on Halloween, I HAD to see it! There could never be too many horror movies set in or around Halloween! And evil, perhaps otherworldly, trick-or-treaters, too?! Ooooh I was soooooo in!

Alone at home on Halloween, a 17-year-old waiting to share big news with her boyfriend is instead besieged by a pack of evil young trick-or-treaters.


While the movie isn't perfect, I still really liked it, especially its nightmarish, kaleidoscopic imagery. It feels like an art film more than a horror film, and I will say that the storyline becomes rather tenuous as the film goes on. However, the demonic little trick-or-treaters were intensely creepy, and I loved how the whole movie felt like a waking nightmare. The cinematography is simply stunning. The scenes in the pumpkin patch were probably my favorite, as I was alternating between awe and horror.

Though the story is a bit all over the place, it is unique. The lurid visuals, nightmarish feel, and loose storyline kinda reminded me of the great Italian horror films of the '70s. They didn't always have the strongest stories, but they were intriguing nonetheless!

Hellions also delves into the themes of teen pregnancy and abortion, and how young women are "damned if they do, damned if they don't" when it comes to sex, pregnancy, and abortion. There are many metaphors throughout the film, and it also reminded me of a descent-into-hell-type allegory.

If you don't like unusual, artsy movies, or prefer straightforward storylines, then you might not like Hellions. However, for those looking for something different, this atmospheric film may be for you, I, for one, thoroughly enjoyed Hellions' hellish Halloween visuals and storyline. Ooooooh, plus Robert Patrick plays the town sheriff, so that's an added bonus!

You can watch Hellions now on Netflix streaming or buy it on Amazon!
Posted by Sarah E. Jahier at 10:00 AM