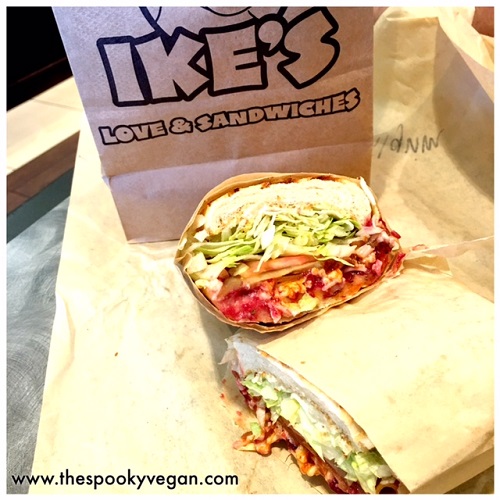 Vegan Pilgrim at the new Ike's in Newport Beach!

Ike's Place is a fast-casual restaurant that started in Northern California, but is starting to expand due to their popularity and awesome sandwiches. They now have locations all over the Bay Area, a few in Arizona, and several in SoCal, including the newly opened Newport Beach location in Orange County, which is called Ike's Love and Sandwiches. It's located off of MacArthur Boulevard close to John Wayne Airport in a small strip mall. The new location is spacious and clean, with plenty of seating inside and a few patio seats outside. 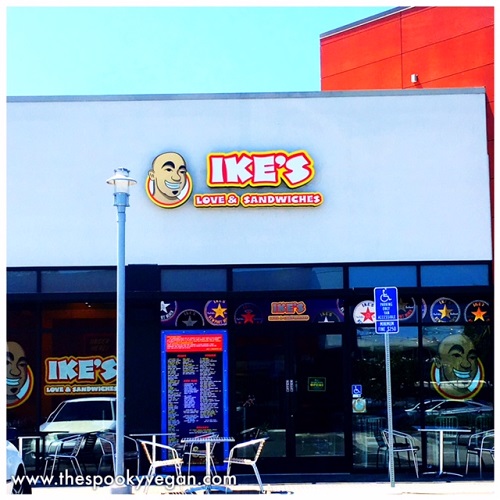 Though it isn't a strictly vegan restaurant, Ike's offers up a ton of delicious vegan options and carries vegan meats, cheeses, and spreads! Their staff is really well-versed on vegan options, and are able to tell you which options can be veganized on their menu (options that can be veganized also have an asterisk next to them on the menu). There are a lot of tempting options, from the Handsome Owl (vegan cheese, teriyaki, vegan breaded chicken, wasabi), to the James and the Giant Peach (vegan cheese, Ike’s yellow BBQ, vegan fried chicken), to the Pilgrim (cranberry sauce, vegan cheese, Sriracha, vegan turkey), plus many more! When you order, you just have to specify you want the sandwich to be all vegan, and the Ike's staff do all the rest. 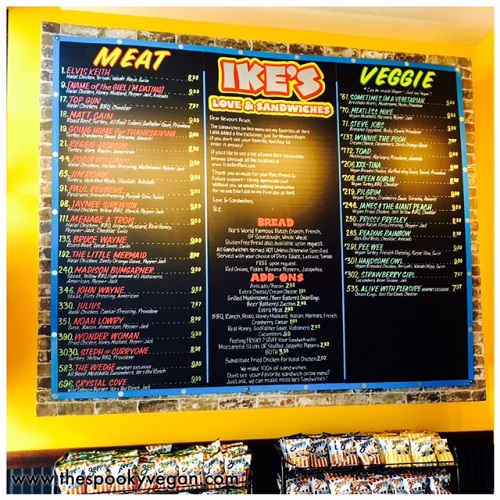 Since they have such an incredible selection of sammies, I am so stoked that they opened a location close to me! I haven't been to Ike's since about three years ago while I was on vacation in Northern California, where I fell in love with their incredibly yummy vegan sandwiches! So, as soon as I could I headed to the new Newport Beach location to get me some of their scrumptious sandwiches. Sandwiches run from $7 to $10, and they also have chips and drinks available. 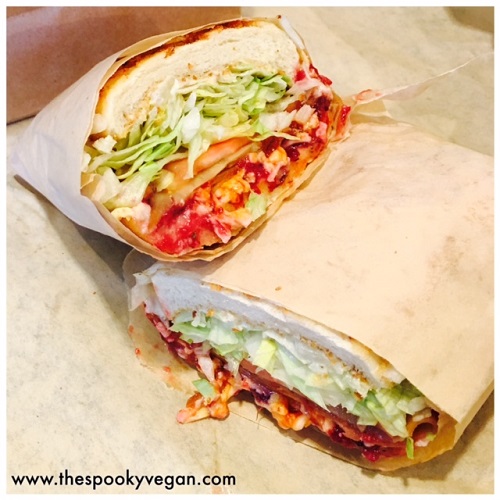 I had a hankering for Thanksgiving food, so on my first trip I tried the vegan Pilgrim. I got my Pilgrim on their Dutch Crunch roll - I can't get enough of their delicious, freshed-baked bread! All their sandwiches are served hot (unless you tell them not to), so my vegan cheese (I believe it is Daiya) was all perfectly melty when I took my first bite. It was so delicious with the cranberry sauce and the Sriracha gave it a nice feisty kick. The vegan turkey (I think they use Tofurky) they used was pretty tasty. The sandwich totally hit the spot! 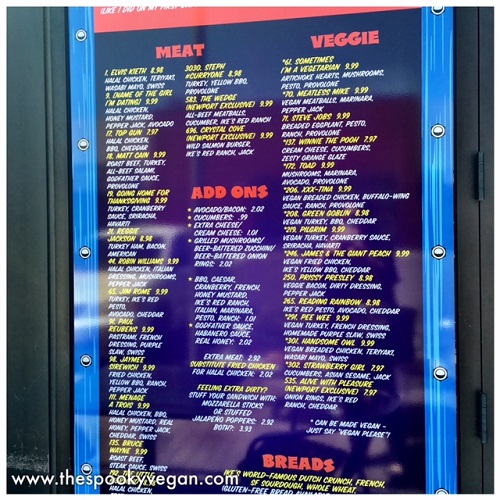 Ike's menu - anything with an asterisk* can be made vegan! Check their
website for their full menu for the NB location.

A few more details about the Newport Beach location: When I went on a Saturday around lunch it wasn't too busy. There was plenty of parking, service was friendly, and though it took about 10 minutes to get the sandwich, the wait was worth it! I can see the location getting fairly busy at lunchtime on a weekday, since there are so many office buildings about, but for a weekend it was easy to get in and out.

We are so lucky to have an Ike's here in Orange County, and I plan on taking full advantage now that they are so close to me. Go try their delectable sandwiches now!

You can find more info, including locations and menus, on the Ike's website!
Posted by Sarah E. Jahier at 8:30 AM