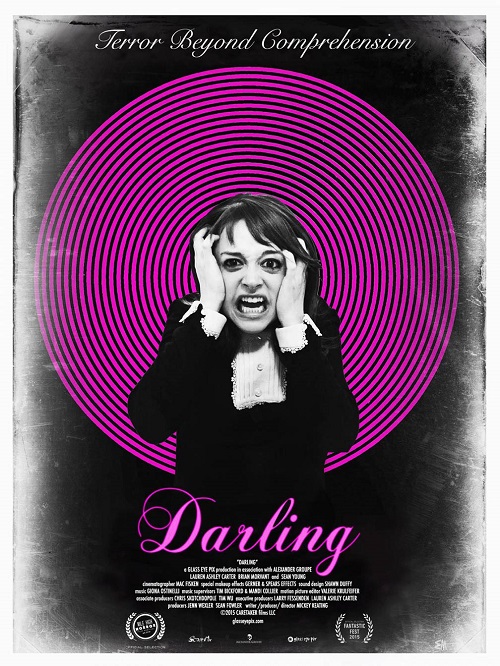 A lonely young woman (Lauren Ashley Carter) descends into madness when she becomes the caretaker of a mysterious New York mansion that has a troubled past.

This film from Mickey Keating (Pod, Ritual, Carnage Park) just hit Netflix streaming over the weekend, and it is a psychological, cerebral trip that is worth a watch! It is filmed in black and white, has very limited dialogue, and relies on sound and startling flashes of horror to unnerve the viewer.

When I watched Darling alone in the dark, I was on the edge of my seat! It got under my skin and seriously unsettled me. There is one scene where a door slams that completely made me lose my sh*t! And it is super difficult to scare me, so it was rather impressive that something as seemingly mundane as a slamming door could scare me so bad.

I also liked that Darling doesn't go out of it's way to explain everything, and how it alludes to the young woman's past and issues, which ends up leaving much to the imagination. It doesn't feel the need to lay everything out for the viewer, which I appreciate. It gives us just enough so that we can figure things out on our own.

The main actress, Lauren Ashley Carter, who fills the screen 95% of the time, is AMAZING! She perfectly captures and emotes terror, pain, curiosity, remorse, and many other emotions throughout the film. Even though you start to wonder if it is her or the house, you still continue to root for her throughout the film.

Darling is stylish, minimal horror with a dissonant soundtrack and jarring, subliminal imagery that drips with dread. If you like beautifully terrifying horror films, I highly recommend checking out Darling on Netflix instant and I look forward to seeing more of Mickey Keating's work in the future!

Darling is also available to purchase on Amazon!