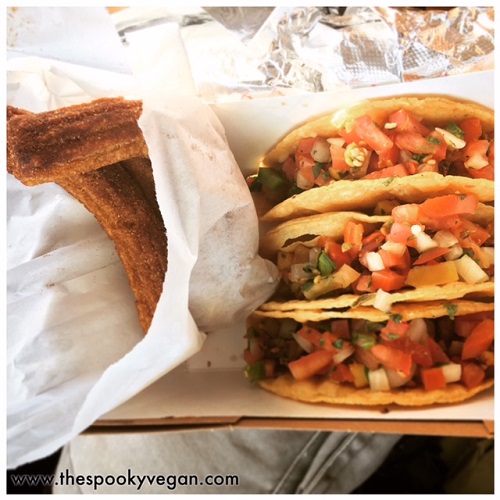 Hugo's Tacos is a small walk-up taco stand in the Atwater Village area of Los Angeles (they have other locations as well) with clearly marked vegan options. I have been dying to check this place out, and since I spent a weekend not to far from this location in October I was able to visit twice! Cuz we all know you can never have enough tacos, right?!

Their menu is pretty big, and most of their items are veganizable (or already vegan). They have tacos, burritos, nachos, burgers, tamales, tortas, breakfast burritos, and even churros and soft serve, all of which can be made vegan! Everything on their menu is clearly marked as vegan or items which can be made vegan. They also have clear distinctions for items that are or can be made gluten-free and vegetarian. I really appreciated how easy their menu was to read and how easy they make it to order vegan items! 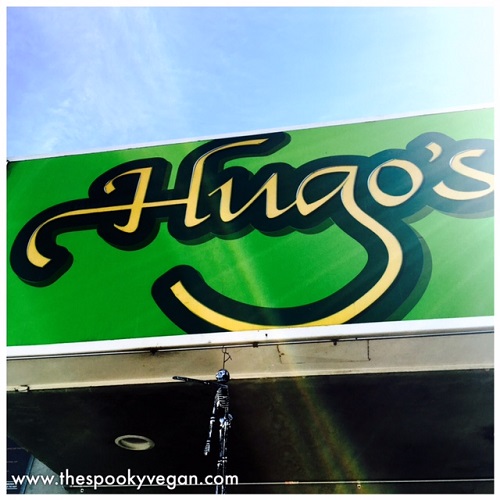 It was October, so that lil' skeleton was just hanging over the order window.

For my first visit I tried their vegan tacos in a crispy shell with soy chorizo. I had been craving crispy tacos really bad, and these totally hit the spot! I also HAD to order their churros, which are vegan, yayyyy! The churros were nice and crisp on the outside and soft and chewy on the inside. They were rolled in just the right amount of sugar and cinnamon. 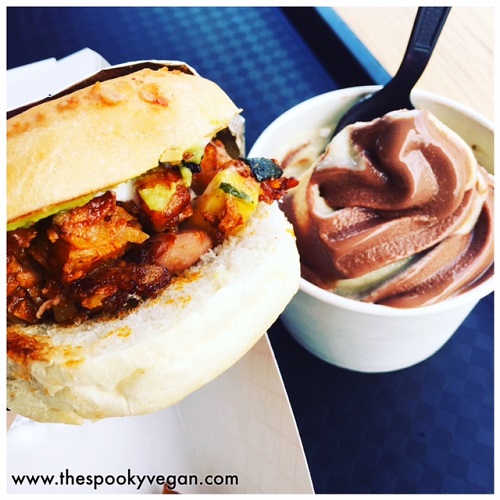 The next day for my second visit to Hugo's Tacos I got their torta ahogada, which is described on the menu as a "Mexican sandwich roll layered with choice of filling, organic refried beans, guacamole, tomato, onions ahogada, and vegenaise. Coated in honey chipotle and griddle cooked. Sweet & Spicy!" I ordered mine vegan with soy chorizo and minus the honey chipotle. It was sooooo good and really filling! I also got their Frozato, which is like soft serve, and is also vegan! I got chocolate and vanilla swirl, and it was heavenly! 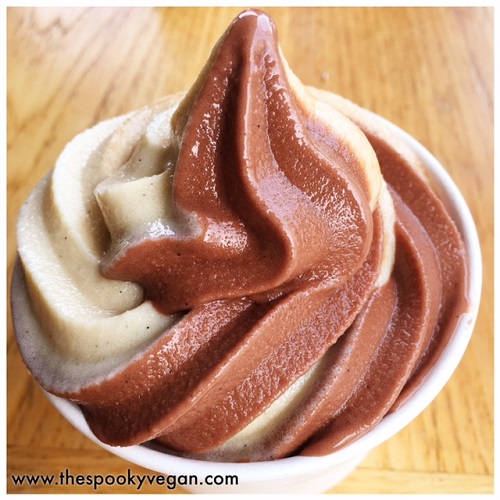 The Frozato deserves its own pic, especially since the one with the torta
above was already half-eaten when I took a pic!

Ever since visiting I have been craving their food, and hope I can make it back there again soon! A few more useful notes: parking is fairly easy (they have a small lot and there is metered parking or free residential parking in the surrounding streets), they have a small seating area adjacent to the parking lot where you can sit and enjoy your food, and though they get busy they are fairly fast with orders. Again, all vegan items are clearly marked, but the helpful staff is also really knowledgeable about the vegan items if you have questions.