Watch Now on Netflix: I Am The Pretty Thing That Lives In The House (2016) 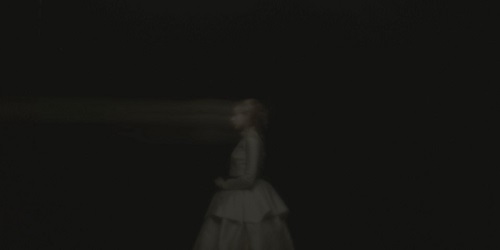 Fair warning, most horror fans will NOT like I Am The Pretty Thing That Lives In The House - it is extremely slow, has a very thin storyline, and it isn't structured like a traditional horror film. However, it totally nails the atmosphere and really got under my skin, which is why I have chosen to recommend it here.

The film is about a hospice nurse that moves into an old home to care for an elderly author, and realizes her books may be inspired by the house itself, which may be haunted by the ghosts of its past inhabitants.

I was enthralled from the opening scenes, and was gripped by the haunting atmosphere through the rest of the movie. Even though the story didn't develop as much as I wanted it to and it sometimes felt like a Lifetime movie, I ended up loving the poetry of the film. It is a slow and quiet film, but its creeping dread had me under its thrall through to the end. I also liked its concept that the living only "borrow" houses from ghosts and the intense feelings of isolation and anxiety the film projects.

Besides creating a general uneasiness, it is also filmed beautifully. I especially love the opening scenes where a distorted ghostly image bleeds into the frame (you can see it above) only to flicker and be swallowed up once more by the darkness. In its own quiet way, I Am The Pretty Thing That Lives In The House makes every dark doorway, every creepy corner of its dilapidated house drip with dread. It keeps up this tension through its entirety, never succumbing to cheap jump scares.

Writer/director Oz Perkins has crafted what I think is a gloomy-yet-dreamy, poetic horror film. I Am The Pretty Thing That Lives In The House is actually his second film, though his first film, The Blackcoat's Daughter (aka February) hasn't seen a release yet (I have been looking forward to that film for quite some time!). I can't wait to see more from him.

I Am The Pretty Thing That Lives In The House isn't a standard horror film, but rather an elegant and eloquent psychological ghost tale. It felt very much in the vein of a Shirley Jackson novel, with its decaying old house hiding secrets and evoking dread in its neglected corridors. It certainly isn't for everyone, but if you want to watch some haunting horror poetry unfold amid some stunningly stark cinematography, I recommend giving this film a chance on Netflix.
Posted by Sarah E. Jahier at 9:30 AM