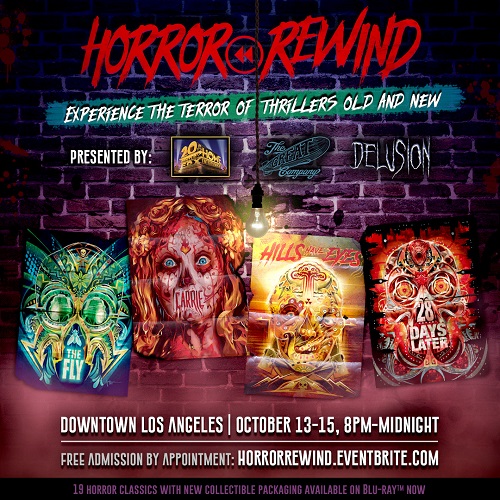 Looking for something to do in Los Angeles on Friday the 13th? A brand new Halloween attraction is opening for a limited three night engagement October 13th called HORROR REWIND! Horror films from the Fox Home Entertainment archive will be recreated for horror fans to experience for this limited-time attraction in Downtown Los Angeles. Horror fans will be plunged into the mind of an obsessed horror fan, who has recreated his favorite films, including The Fly, The Hills Have Eyes, 28 Days Later, and Carrie. HORROR REWIND is free, but you need to RSVP to secure your space and free tickets for this eerie event.

For more info, check out the press release below:

The free experience will allow Los Angeles natives to step into worlds of horror classics old and new including THE FLY, THE HILLS HAVE EYES, 28 DAYS LATER and CARRIE.

LIMITED Experience Open for Three Evenings Only – October 13, 14 and 15

WHAT: Twentieth Century Fox Home Entertainment brings some their most terrifying horror films to life when HORROR REWIND arrives in Downtown Los Angeles the weekend of Friday the 13th. Taking place over the course of three nights, this immersive experience is produced by The Great Company in collaboration with the creators of premiere interactive horror theater Delusion.

In a secluded corner of the Arts District of Los Angeles, a deranged horror movie super fan, has created a living, breathing installation in homage to his four favorite films (THE FLY, THE HILLS HAVE EYES, 28 DAYS LATER and CARRIE). In tribute to these films, he has trapped innocent civilians inside and transformed them into demented and deformed monsters, forced to live-out his most terrifying celluloid nightmares.

For those who make it out alive, forget what your mother told you and stop by the ominous van parked outside. There you’ll be able to feed your own macabre obsessions and purchase any of 19 brand new Blu-rays featuring collectible packaging cover designs by acclaimed digital artist Orlando Arocena.  Limited edition posters of Arocena’s work will also be available as a gift with purchase while supplies last.

Fans can also purchase the full line-up of the Halloween faceplates from Arocena here: http://bit.ly/FoxHalloweenWM

TICKETS: Admission is free but ticketing is EXTREMELY limited and on a FIRST-COME-FIRST SERVE BASIS!

Guests must register in advance at HORRORREWIND.EVENTBRITE.COM to receive an appointment day and time. A limited number of standby tickets will also be available via the above website.

WHERE: Arts District, Downtown Los Angeles - Exact location to be revealed upon confirmation of appointment.