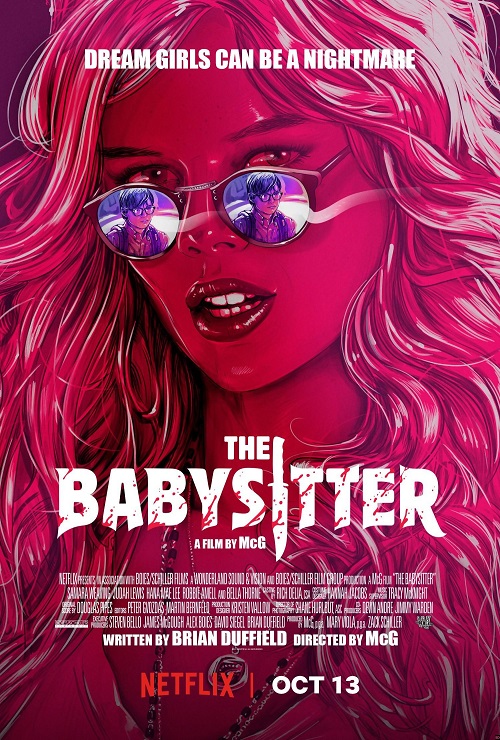 The Babysitter hit Netflix on Friday, October 13th and I couldn't wait watch it! This horror comedy stars a young cast including Samara Weaver, Bella Thorne, and Judah Lewis and is about a young kid who finds out something disturbing about his babysitter - that's basically all I knew going in when I gave it a look over the weekend and was pleasantly surprised by how much fun I had watching it! It has a fun '80s slasher vibe while still managing to feel fresh. Plus, it's not afraid to poke a little fun at the horror genre. Check out more of my thoughts on it below.

Synopsis: Twelve year-old Cole adores his babysitter, Bee, who is beautiful, funny, and actually takes the time to listen to him and seems to always have his back. One night while Bee is babysitting him, Cole secretly stays up past his bedtime so he can spy on Bee and see what she does after lights out. Turns out she is the leader of a cult that performs human sacrifice, and Cole spends the rest of the night evading Bee's killer followers as they pursue him to stop him from revealing their secrets.

I really enjoyed getting to know the characters - first the bullied but sweet Cole, then the bad-ass Bee. Even before all the mayhem went down there were some great moments between Cole and Bee that really showed what a strong bond they had. The supporting characters were also rad, from Cole's bully to his sweet childhood friend to Bee's killer posse. I loved the bad-ass character of Bee, even if she was a psycho cult leader, and Samara Weaving who played her was incredible!  I also thought Cole (played by Judah Lewis, who was fantastic) was an adorably naive but genuine character that ends up stepping up and turning the tables on his attackers.

The story, written by Brian Duffield, was simple but had enough twists to keep it interesting and enough uniqueness to make it feel fresh. The dialogue was witty and punctuated by one-liners. Of course the direction by McG was vivid, sleek, and totally engrossed you in the story.

The best thing about The Babysitter besides the characters, funny dialogue, and direction - the gore! Of course, the gore is portrayed in a funny way since most of the deaths are pretty outlandish, but it is some good, blood-splattered fun! The kills were surprisingly inventive, varied and entertaining - there are stabbings, people getting blown up, hangings, shootings, car crashes, and more.

The Babysitter is an enjoyable film that will have you giggling as well as gasping - it's vivid and bright and hilarious, but also dark, gory, and even a little heart-felt. People have been describing it as Home Alone if it were a horror film, and I have to agree. If you haven't watched it already, I highly recommend doing so ASAP - it is available now streaming on Netflix!

Have you seen it yet? If so, what did you think of The Babysitter?