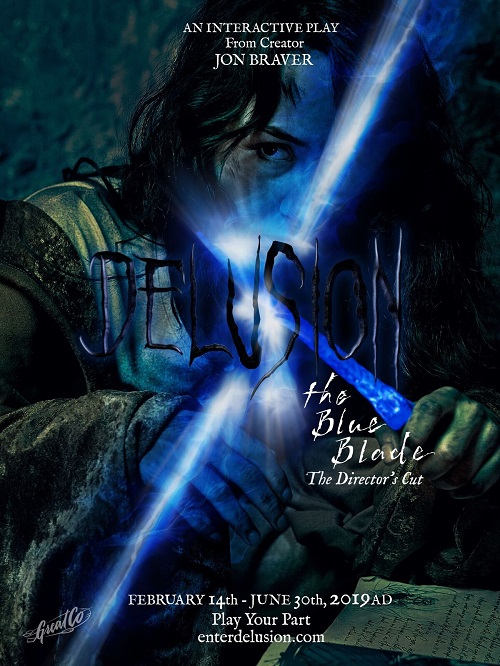 Delusion has been one of my favorite Halloween traditions the past few years - it is an interactive play that changes every year, complete with new plot, new characters, and new locations - you get to play a part and physically move through gorgeously decorated sets and interact with the characters in the story. To get a peek at what the experience is like, check out my review of their 2016 show, His Crimson Queen! The show is always a popular draw and sells out super fast, though they took a break in 2017 to focus on their future plans. This past year they returned with The Blue Blade, which has been extended into spring 2018 with a brand new "director's cut"! Check out more info, as well as a new trailer, for this spring extension of the play below:

(LOS ANGELES, CA, January 22, 2019) — Coming off one of the most successful runs of its shows ever, Delusion, the vanguard of interactive theater, has announced that the spring 2019 extension of its new, original play Delusion: The Blue Blade, will be a "Director's Cut" and will bring with it a number of exciting changes that are sure to captivate current fans of the Delusion Universe and newcomers alike. Highlights of the spring show include new plot twists, new audience challenges, new artifacts, new actors, and more. To tease the new show, Delusion has also released a brand new trailer. Individual and group tickets are now available at www.enterdelusion.com.

View the new trailer below:


From visionary creator Jon Braver and The Great Company comes Delusion: The Blue Blade, an Indiana Jones meets Blade Runner-style adventure that invites guests in groups of eight to a world left erratic since the disappearance of the rare artifact, The Blue Blade. Once held by The Safeguard Society, an elite group of historians, the sacred blade was stolen by Professor Evelyn Lowell…one of their own. The fate of time and space hang in the balance as Evelyn and the blade slip further away. As a sign of desperation, The Safeguard Society looks to you and your friends — their most promising initiates — to track down Evelyn and The Blue Blade. Rumored to be underground and protected by a strange cult, Evelyn’s disappearance had created more questions than answers. Now it’s time to play your part (#playyourpart) in the most transformative theatrical production of its kind.

"We're really excited about the extension of this sixth story in the Delusion Universe" said Jon Braver, creator of Delusion. "This is the first time we’ve extended a show beyond the fall season. We’re confident this show in particular can transcend any one season. Plus, changes are afoot, as Prof Evelyn Lowell has manipulated time in ways she could never have imagined, which means the show will offer something new and exciting for those who have seen it before as well as brand new Delusionals."

Heralded by NPR as the "hottest ticket in town", Delusion has captivated sold-out audiences since its first play opened in 2011, transforming them into characters inside a living, breathing, dark world of epic interactive storytelling. Delusion: The Blue Blade marks the first show for which there will be corporate pricing, group discounts, and a VIP package that includes a behind-the-scenes tour. There is now also a Wait List for fans who want to show up on a given night and fill in for no-shows. All of these additions bring the production to an even broader audience, including those who have never experienced Delusion or interactive theater before. Tickets start at $95. Past seasons have sold out quickly, so we are urging guests to book tickets while they are still available.

In a new era of storytelling, Delusion (#playyourpart) remains one of the most popular interactive events with an absolute commitment to quality and originality. Delusion began in 2011 as a passion project for creator Jon Braver and for six seasons has captivated sold-out audiences, thrusting them into an otherworldly adventure where they must play their parts in order to move the story forward. Live actors, creature effects, stunts, elaborate set design, and an original score weave together a tale unlike any other. And now, with its new partners at Skybound Entertainment and The Great Company in Los Angeles, the Delusion Universe of stories has expanded into other mediums; the first being a cinematic VR adaptation of the 2014 play Delusion: Lies Within, which was co-created by Witty Acronym and launched in December 2018 on Samsung VR.

The Great Company (GreatCo) is a Los Angeles-based experiential studio that collaborates with IP rights holders, global brands, and cultural institutions to produce interactive installations and immersive experiences that connect audiences in meaningful ways and transform the perception of time and reality. GreatCo's work includes collaborations with Marvel Studios, PepsiCo, and The Smithsonian Institution.

A film and theatre director, action coordinator, and Disney Imagineering consultant, Jon Braver's extensive career has run an exciting path. His love for the fantastical and experience working with some of the top directors in the business has helped to shape his unusual range of talent and keen ability to deliver a unique vision. He began work on his Delusion Universe in 2010 and continues to shepherd the property as it expands to new audiences and formats.

Grab your tickets now on www.enterdelusion.com!
Posted by Sarah E. Jahier at 11:00 AM