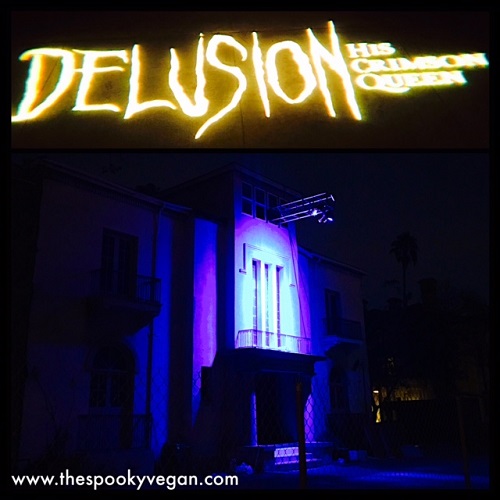 This past weekend I attended the immersive, interactive play Delusion in its 2016 incarnation, titled "His Crimson Queen." Delusion is unlike anything I have experienced, an interactive play where you become characters as well as interact with others to solve a mystery while walking through elaborate sets in an actual mansion. It is an entirely unique entity that has incredible production value, phenomenal acting, thrilling mystery, and just enough scary moments to keep you on your toes! Keep reading about this year's production below and why it is one of the most-anticipated Halloween season events in Southern California!

Delusion has been putting on productions since 2011 (with the exception of 2015, which they skipped) with each year unveiling a whole new storyline to eager attendees. I was very sad last year when they didn't put on a play during October, so I was ecstatic when Delusion returned this year with "His Crimson Queen!" I wasn't the only excited one - tickets sold out frighteningly fast (yes, they are unfortunately sold out of their initial run this year)! However, if all goes well they will add additional engagements - sign up via their site to receive updates on if/when this happens!

I've only attended two Delusion plays, this year's show and 2014's "Lies Within," but even with just these shows under my belt I believe Delusion is one of the best haunt experiences in Los Angeles! Before moving on to my recap below I will mention that there might be slight spoilers, so if you are planning on attending Delusion this year you may want to bookmark this page and come back to finish reading once you have experienced "His Crimson Queen." I will try to keep my review below spoiler-free, but I find it is best to enjoy Delusion without any preconceived notions, so continue reading at your own discretion! Also, all photos included in this post were taken outside of the manor, as no cell phone use is allowed once you begin the play. 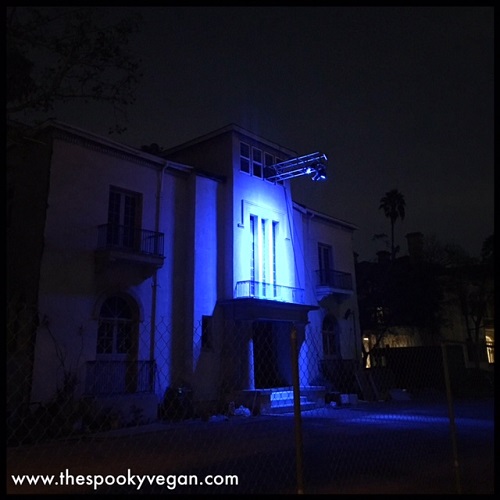 As the name of the play alludes, "His Crimson Queen" revolves around vampires. It it set in really cool-looking old mansion in Los Angeles, which looked like the perfect hide-out for vampires. When we arrived, we checked in, were told the rules (they have a strict no cell phone/no bag rule while you go through the experience), then lounged by a fire pit and explored the underground bar. When our group of about 10 was called, we assembled at the manor's steps to begin our adventure. Our usher told us who we were and who had called us to this manor and exactly what (or who) we were searching for. That's all I will say about the storyline, as I don't want to give anything away. I will say that we encountered some nasty vamps and other beings inside the manor, including several helpful inhabitants who assisted us as we explored the entire manor from attic crawlspaces to dark basements. Along the way we were tasked with solving puzzles or riddles, retrieving objects, working as a group to escape a locked room, and using our combined powers to keep the blood-thirsty vampires at bay. We also ran, crawled, hid in small spaces, and some of us were made to drink potions, control a wayward vampire, be locked in a coffin, and more...

This year's show took a little over an hour, and for entertainment value alone it was well-worth the ticket price. I don't think this show was a strong as the previous "Lies Within" show, but it was still an amazing experience and one I highly recommend! The best thing about this year was the phenomenal cast, and Delusion's amazing actors sold the show for me. From the first scene we were immediately engaged and enthralled (and a little titillated). Every single actor did an incredible job! 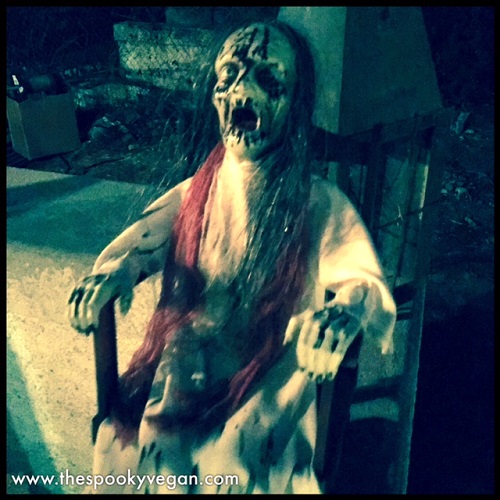 The overall look of the house also helped close the deal for me. The atmosphere Delusion creates really makes you feel you are smack-dab in the middle of a horror movie. Scenes come to life before you, you can feel the breath of a vampire mere inches from your neck, you can see the decaying manor's rooms from attic to basement, you hear screams from other parts of the house, you can smell the mustiness of rooms boarded up against sunlight, and can nearly taste the blood-red wine (or blood) drained from goblets. The meticulous attention to detail (things written in blood on the walls, potion bottles, The Cabinet of Dr. Caligari being projected in a room, portraits on the walls, costume details, and much, much more) is astounding and impressive.

I wish I had all the time in the world to ogle their beautiful production design, but there is no relaxing while walking (or running) through the levels of "His Crimson Queen." Just when you allow your mind to linger on some wondrous detail, you'll be startled out of your reverie by one of the ferocious characters or jaw-dropping special FX. There were some really neat stunts they did this year, and I don't want to say any more so you are just as stunned as I was. I will say there there are a few stunts that have been done in previous shows that were expected, but they were still cool to see. I think the best stunts occurred early on in the show, the second half delighted more in splitting our group up!

Yes, there were multiple instances where our group of about 10 was split up, or group members were removed completely for a scene or two before being rescued by the group in subsequent scenes. In one thrilling instance, the group was split up in the dark with creatures stalking us...that part was probably the most thrilling for me! I really like how the group was split and I think this gives everyone the chance to have a very unique experience! 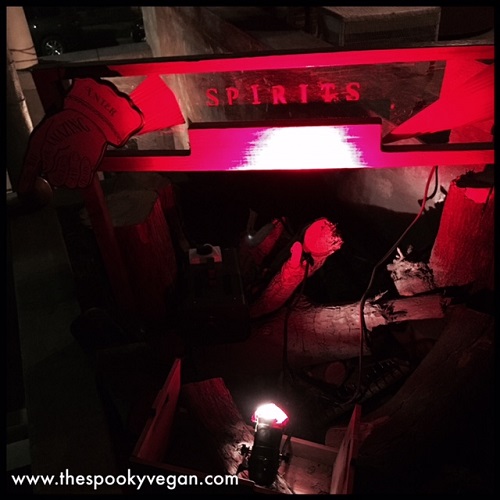 Spirits sign leading the the hidden underground bar at Delusion's outdoor
lounge area, where we killed time before entering "His Crimson Queen."

The only part of the play I didn't like was when the group was kinda left to their own devices to explore parts of the mansion and figure things out on our own. In one instance we were in an escape room situation that dragged on a little too long and ruined the flow of the experience. Another time we were in a room where we weren't quite sure what needed to be done as we had no prompts or guide telling us what was next, so we just kinda stood around for a few minutes. I know escape rooms are the big thing right now, but I don't think they are the right fit in an immersive play where the momentum can be lost.

My only other complaint was that the very last scene felt kinda anti-climatic. The effects were cool, but it just kinda left me with a feeling of "was that it?". I think the ending of "Lies Within," the previous show, kinda spoiled me, though! Despite a lackluster ending and the escape room snoozefest, this "His Crimson Queen" was another fantastic Delusion show and has become one of my favorite events of the Halloween season. 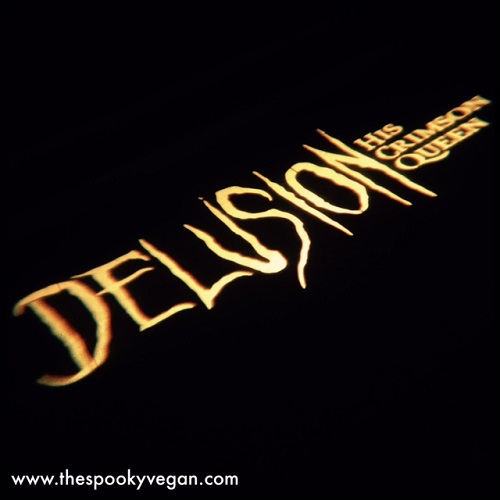 I love haunted houses or haunts, but Delusion is special. Its magic lies in that it isn't just a haunted house where you simply react to monsters popping out at you, nor is it an "extreme" haunt where you're tied up and tortured (both concepts are a bit of a bore to me, to be honest). No, Delusion is a completely immersive experience where you are given the chance to transform into characters and play your part throughout your entire time there. It's scary, it's beautiful, and you can lose yourself to the story and just go with it! The trick is that you get more out of it the more you put in, and the more you interact. Yes, you can hang back and let the rest of your group talk with characters or solve puzzles, but it is so much more fun if you put yourself out there and become the story! Believe me, I'm super-shy and it takes me a little while to warm up, but once I let go and invest myself in the story it becomes so much more thrilling.

Delusion is a memorable Halloween experience if you are looking for something different, something that will stick with you and make you feel like you experienced something sinister and special. I have to hand to creator/writer/director Jon Braver and his whole cast and crew for delivering another phenomenal experience this October. "His Crimson Queen" is a gorgeous, twisted, and enthralling production. It wasn't perfect, but ever since I went I can't stop thinking about it! I cannot wait to see what they do next year...

For more information, please visit www.enterdelusion.com!
Posted by Sarah E. Jahier at 8:00 AM