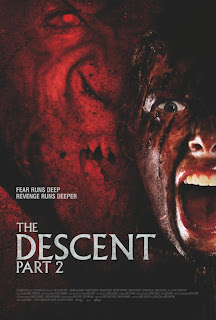 I have been dreading watching The Descent 2 ever since I first heard about the sequel. Seeing as it came out on DVD recently, I finally decided to subject myself to the film despite all the negative reviews it has received.


I sat cringing on the couch as the film started, expecting the worst, but I soon relaxed as I realized, hey, this isn’t that painful! Sure, the film is basically a retread of the far superior original, but I was expecting absolute bottom-of-the-barrel here. Instead, I discovered that while the movie is mediocre, it’s not horrible.

The story picks up where the original left off, with Sarah, the only survivor of the original, busting out of the cave. She is taken to the hospital but when she wakes up can’t remember anything. Of course the cops want to have a few words with her since they’ve been searching for her friends the past few days.

Since Sarah doesn’t remember anything they have the bright idea to take her into the tunnel system and see if they can jog her memory and see if she remembers what happened.

When Sarah, the cops and their guides get deep underground, the monsters come out to play…

Though the film is pretty much just a copy of the original, minus all the girl power, it was still surprisingly entertaining. Like the original, it still has some great claustrophobic scenes (eeek…I almost died when they went in the underground river that was so cramped!) and decent gore. However, it does have its boring parts since we’ve seen it all before in the original.

Also, they show the monsters WAY too much in this one…they don’t look as scary anymore and you expect them to always be lurking in the shadows, so when they appear (which is often) it isn’t surprising or frightening.

It also has some iffy twists that don’t add all that much to the story…and the very last scene was L.A.M.E.!! So the monsters have a caretaker now? WTF?! Also, there are plot holes galore and nonsensical scenarios. Yeah, let’s handcuff a suspected murderer to a cop while navigating dangerous tunnels and running from monsters…smart!

However, while this sequel lacks the smarts, tension, scares and suspense of the original, it isn’t such a bad way to kill a weeknight when nothing is on TV. I was pleasantly surprised that I wasn’t utterly appalled by The Descent 2, but that doesn’t mean I’ll buy it anytime soon and it doesn’t even warrant a second viewing.

The choice to watch it, my spooks, is yours!