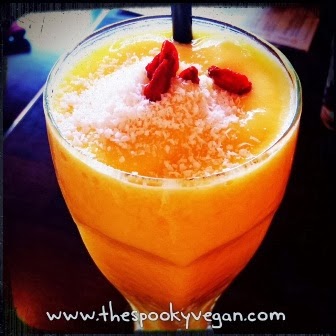 Since we were eating light, we ordered just two appetizers - we chose the Lettuce Leaf Tacos and the Sun Nachos with jicama "chips", both raw. 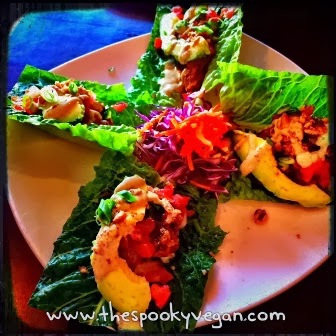 The Lettuce Leaf Tacos were made with "SunChorizo [housemade vegan "meat"], cashew cheese, pico de gallo, avocado, green onion, pecan pieces and basil ranch". This was all served in lettuce taco shells. Wow, I don't know how they did it, but they made something that sounds super-simple taste out of this world! These were really, really delicious and even my non-vegan boyfriend gobbled them up! These were a definite winner in my book...I just wish we had gotten two orders! 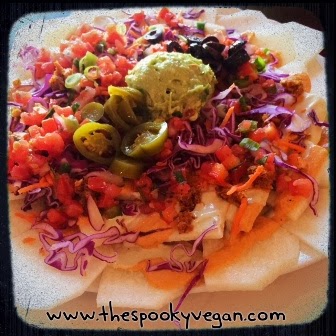 The Sun Nachos were described on the menu as "SunChorizo, nacho cheese, cashew cheese, guacamole, pico de gallo, olive, jalapeno, green onion with choice of raw thin-sliced jicama 'chips' or baked blue corn chips". We chose the raw version with jicama chips. These tasted similar to the Lettuce Leaf Tacos, but with an extra kick. I liked these a lot, and you get a HUGE amount! I barely made a dent in them and had to take most of them home.

SunCafe was a pleasant lunchtime stop and I would gladly stop there again next time I am up in Studio City.

You can check out the full menu and learn more at SunCafe's website!
Posted by Sarah E. Jahier at 10:30 AM