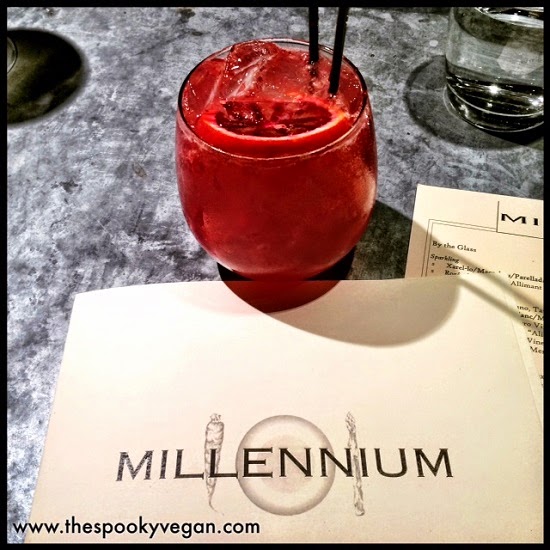 I finally made it to Millennium in San Francisco! Toasting with an
Ingrid Bergamot signature cocktail!

Millennium in San Francisco has been at the top of my vegan bucket list for a loooong time, but for one reason or another I just never made it there. With the news that the restaurant would be closing their current location permanently by May 1st, 2015 (newsflash: they recently announced they are raising funds through a Kickstarter campaign for a new location where they may re-open as early as this summer!), I didn't hold out much hope that I would ever be able to visit this historic vegan restaurant (they have been open since 1994!). However, as luck would have it, I needed to travel to San Francisco to go wedding dress shopping for my sister, and one of the first things I did after finalizing my trip was to book a reservation at Millennium!

I visited the restaurant on Friday, February 20th, after a fun day of dress shopping (wow, did I just say "fun" and "dress shopping" in the same sentence?!)! I had made a reservation for later that evening, but we arrived at the restaurant at 5:30 PM (when they open) to see if it would be possible to squeeze in earlier. Luckily, they had room for the four of us at the bar! They were very accommodating and we only had to wait about 10 minutes to be seated. Sitting at the bar was pretty cool, and everyone seemed to prefer it over sitting at a table or booth!

We started off with some tasty drinks to toast my sister and a successful day, then moved on to food after ogling the menu for a while. We all decided to order a bunch of different dishes and share everything. We started with some small plates and ordered the Roasted Fingerling Potatoes ($7.50), Pistachio Stuffed Dates ($8.25), and Seared Brussels Sprouts ($8.75). All were ridiculously good, but I loved the warm flavors of the Pistachio Stuffed Dates best! The Seared Brussels Sprouts were a close second; I especially loved the smoked tofu they were prepared with! The Roasted Fingerling Potatoes were good, and I loved their bright color and the sauce they were served with. 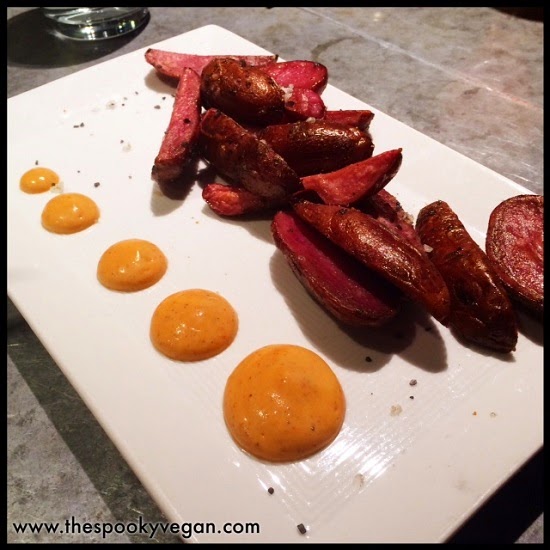 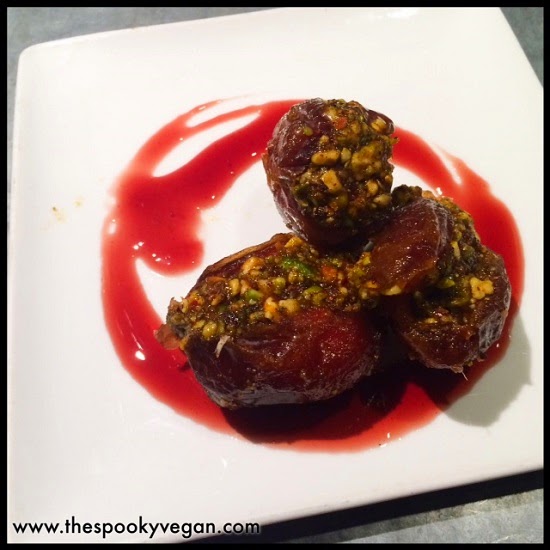 The Pistachio Stuffed Dates were made with orange, cinnamon,
Aleppo chile and a pomegranate reduction. 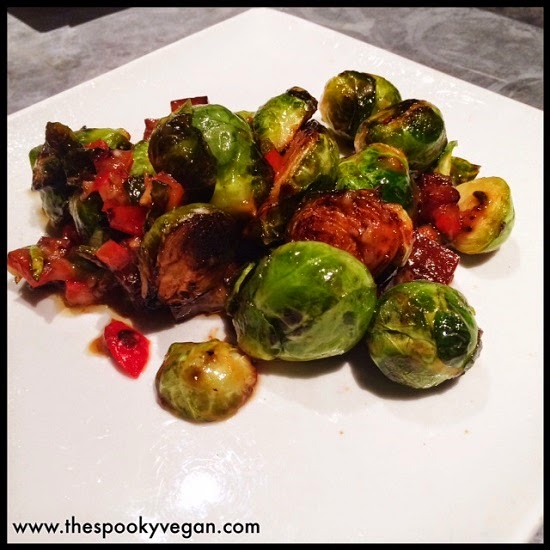 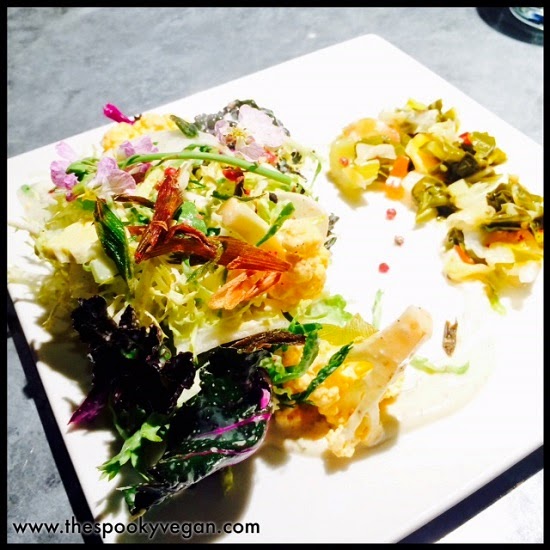 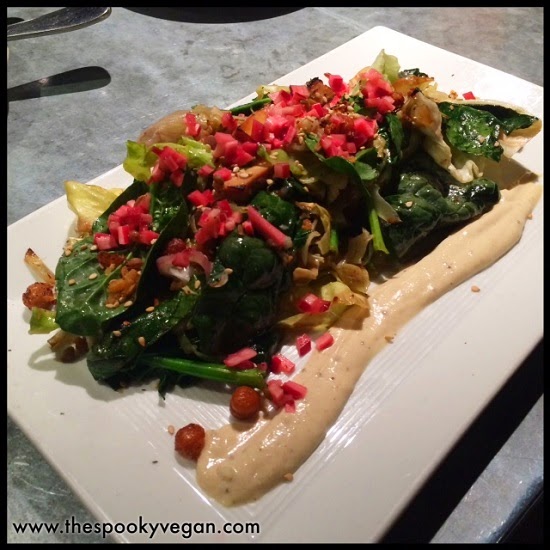 For the mains, we settled on the Pumpkin Gnocchi ($23.75), Creamy Buckwheat Polenta ($23.75), and the Grilled Portobello Mushroom and Poblano Chile Tamale ($23.50). The star of the three was the tamale...so many flavors and so spicy! I could have eaten so much more of that! The Pumpkin Gnocchi was also delicious with its delicate flavors but hearty texture. The only dish I didn't care much for was the polenta, which just had too much going on and whose flavors just seemed random and off. 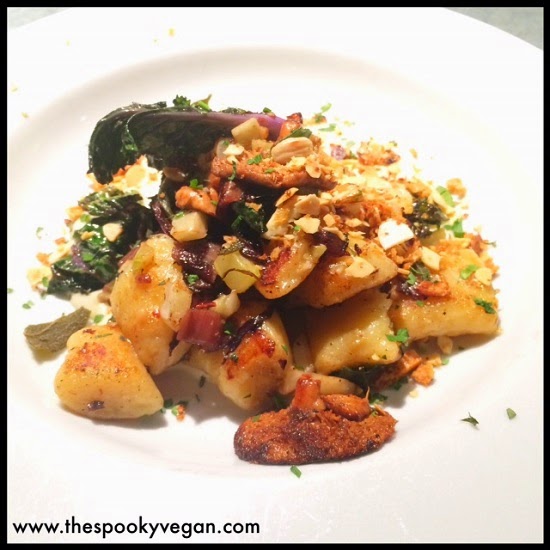 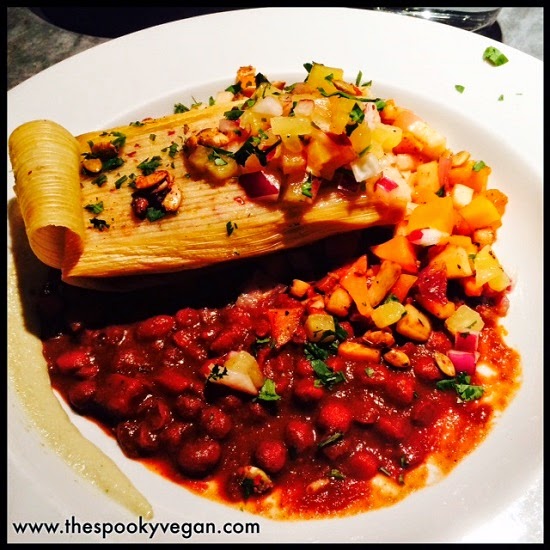 At this point we were stuffed, but could not pass up dessert! There were so many yummy-looking sweets, but we settled on three - the Mexican Chocolate Cashew Cheesecake ($9.50), Crème Brûlée ($11.50), and the Seasonal Sweet Ending ($8.00). I had heard dessert was one of the best things about Millennium, but unfortunately I was underwhelmed with the desserts we selected. The cheesecake had a weird flavor and I did not care for the texture at all. The horchata ice cream didn't taste like horchata - it just tasted like vanilla. The only good thing on the dish was the chocolate covered bananas on the plate (which seemed out of place, but at least they were tasty!). The Crème Brûlée was ok, but nothing to write home about. The best part about it was the almond "honey" ice cream, which was my favorite dessert item of the night! The Seasonal Sweet Ending was also so-so, and our plate didn't come with all the items that were listed in the description. Oh well...if I had to do it again I would just order their trio of ice creams, the flavors which change nightly. 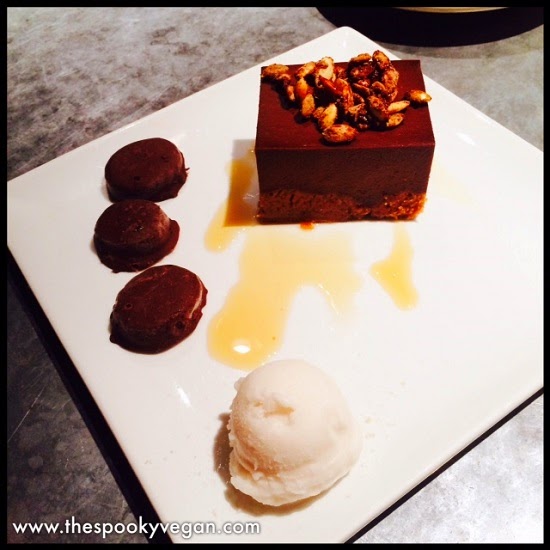 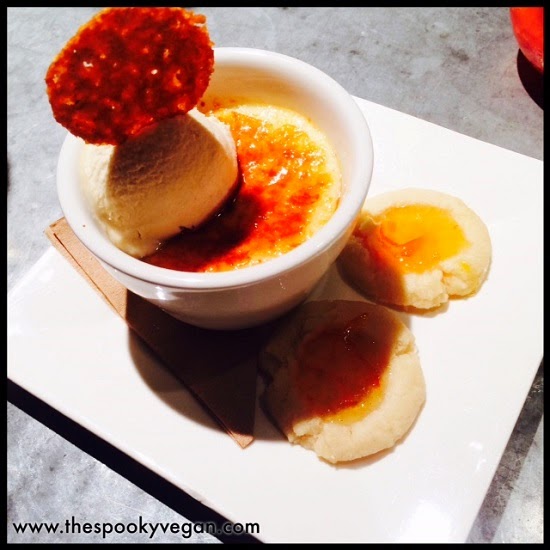 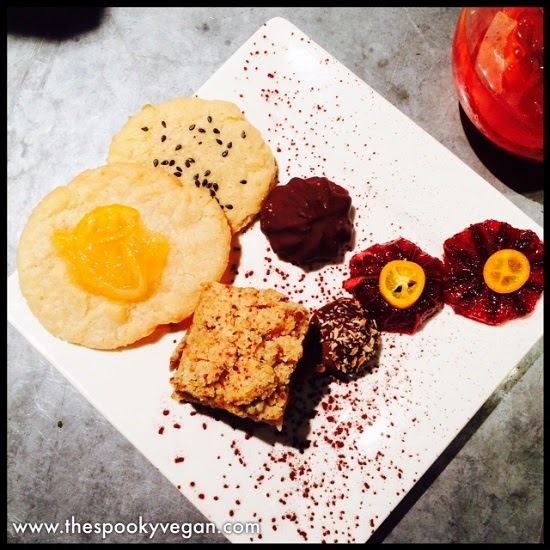 
Overall, I had a wonderful experience at Millennium and I am so happy I finally got to go AND that I got to share it with my family! Though some of the dishes were hit or miss, and most of the desserts were a miss, I still felt that it was a pretty neat experience. The ambiance was great, the staff was friendly, and for the most part the food was delicious. Thank you, Millennium, and I hope I get to dine at your new incarnation, should it come to fruition!

For more info, visit the Millennium website or their Facebook page!
Posted by Sarah E. Jahier at 8:30 AM