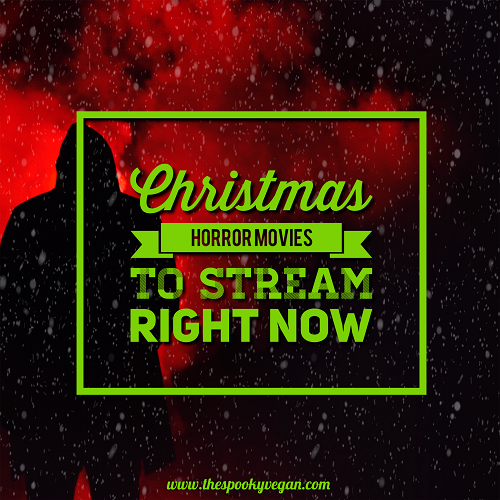 If you are like me, you are looking for some ho-ho-horror films to get you through the saccharine muck that is clogging up all the streaming platforms right now. I like to have something festive on in the background to decorate, wrap presents, bake, or just enjoy a chilly night wrapped up in blankets on the couch, and it is so much easier to choose something on Shudder, Hulu, Amazon Prime, etc. rather than going through my Blu-rays or DVDs (yes, I am really that lazy!).

With that in mind, I've been keeping an eye on all the Christmas-themed horror films on or coming to streaming platforms and I wanted to share the best of what is available. I've rounded up some of the best (errrrr, or at least somewhat entertaining) holiday horror films that are available to stream, organized by platform.

SHUDDER
This year, it seems Shudder has the best selection with their Unhappy Holidays section, featuring a slew of newer horror films as well as old classics. They also have a new Joe Bob special coming out right before Christmas. Check out the horror goodies they have:


AMAZON PRIME
Amazon Prime has a lot of Christmas horror movies, but most of them are really awful (though go ahead and take your chances with them). In my opinion, there are only a few worth watching (and even some of these are iffy):


HULU
Hulu is a little lacking in the spooky spirit, but what it does have are solid Christmas horror films, including a killer new entry for their Into the Dark series.


NETFLIX
Unfortunately, Netflix doesn't have any decent holiday horror films available for streaming, but there are two that feature short Christmas scenes:


If your favorites aren't listed here or you don't have these streaming services, I've compiled a lot of these holiday horror films (and more) available on DVD and Blu-ray on Amazon!