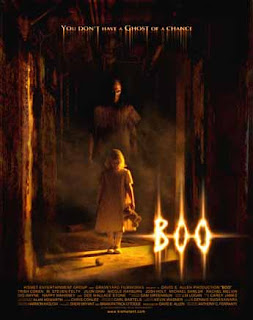 For years I thought I had already seen this flick, but I guess I just got it mixed up with other haunted asylum movies. I expected the film to suck, but surprisingly it was pretty entertaining. Despite the fact that it treads familiar ground, Boo’s writer/director Anthony C. Ferrante mixes things up with various characters, a chilling setting and plenty of spilled blood.

The film opens on Halloween night, where four friends decide to break into a supposedly haunted abandoned mental hospital. Meanwhile, a brother of a girl who disappeared a week ago seeks the help of a cop and they also enter the mental hospital. Once inside, the evil spirit of the asylum, a patient named Jacob (M. Steven Felty), won’t allow the new inhabitants to leave…alive. He proceeds to kill and then possess the intruders one by one…can anyone escape alive?

First off, I love movies set during Halloween! During the first few scenes, Boo has a couple of festive shots including pumpkins, scarecrows and a girl carving a pumpkin. The film keeps up the spooky spirit when characters enter the haunted asylum. I really thought that the decay and shadowy corners gave the asylum a life all its own and it was nice to see a setting used to its full potential.

Surprisingly, this film also had a lot of bloody set pieces! I was quite impressed with the makeup and special FX, especially since this was an independent production. Can you say exploding possessed corpses? That got your attention, didn’t it?!

However, despite the film’s strong first hour, the conclusion kinda tries to pack too much in and ends up backfiring on itself. There was just too much exposition on the background of Jacob (and a nurse, played by Dee Wallace Stone) and too many dumb character decisions. Until the ending, the film had great pacing, but the last 30 or so minutes just get bogged down with too much information. Another negative is that the acting is, at times, kinda iffy.

Despite the negatives, Boo was still a nice surprise and had a pretty engaging story. Give it a rental this Halloween season!

READ ORIGINAL POST ON FATALLY YOURS
Posted by Sarah E. Jahier at 10:22 AM