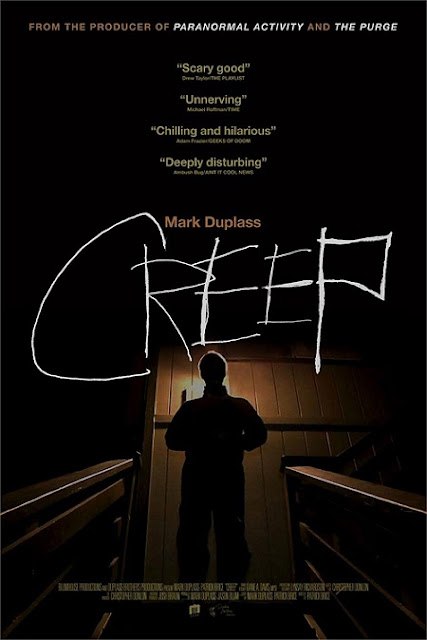 You can guess where the story is going from the get-go, but just like Aaron you get sucked into Josef's world and can't look away. Josef is a weirdo from the start, from his penchant for scaring people (expect tons of jump scares) to his fondness for wearing a werewolf mask he calls Peachfuzz. Despite his obvious instability, he has a charm that keeps Aaron around and filming, even when things start to get strange.

This is filmed on handheld cameras, so yes, you may consider it another "found footage" flick. Despite how many found footage films I've seen (and keep recommending), this one feels more intimate and less gimmicky. The reason for the filming is also clear and doesn't ever feel forced like some found footage flicks.

I loved Creep's whole premise, how it riffs on horror movie tropes, its uncomfortable WTF moments, its dark humor, and how it manages to surprise and unnerve even when you think you know where the film is going.

Watch Creep now on Netflix streaming, or check it out on Amazon!

Note: This is not to be confused with the 2004 subway horror flick of the same name starring Franka Potente (though that one is pretty rad, too!)
Posted by Sarah E. Jahier at 10:30 AM