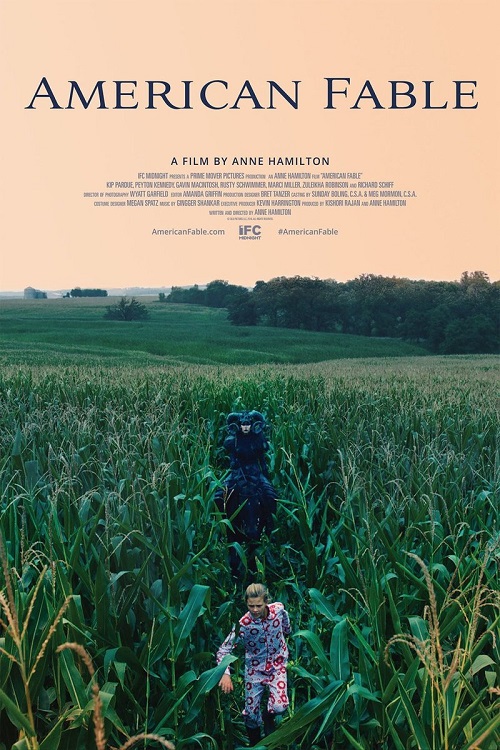 This fantasy thriller was a film I had very much been looking forward to seeing since I saw the trailer. Its portrait of rural Americana in the 1980s tinged with a fantasy atmosphere appealed to me partly due to the fact that I grew up on a rural ranch and seemed I would identify with the young lead. It also looked beautiful and the fantasy elements made me even more intrigued.

Synopsis: With her family's livelihood imperiled by the farm crisis during the 1980s, 11-year-old Gitty loses herself in a world of fantasy and make believe. But she stumbles into her own fairy tale when she makes a startling discovery: a well-dressed mystery man being held captive in her family's silo. It's the beginning of a labyrinthine journey that will turn Gitty's world upside down and force her to question her loyalty to her own family.

This film is not horror, but I think it will appeal to genre fans due to its darker material, thriller aspects, and whimsical fantasy elements. I felt myself drawn into the mystery of the film and the young protagonist's imagination. The film's captivating narrative explores growing up, loyalty to family, the struggles of small, family-owned farms, doing what is right vs. doing what is expected, imagination as an escape, and more.

The film has its cast of villains and heroes, like a fairy tale, however these characters seem to have shifting loyalties so that the lines between villain and hero is tenuous and is constantly shifting. Like Gitty, we are always re-assessing who is trustworthy and who is not, including her own family. I loved following Gitty's journey as she discovers more and more about loyalties and the complexities of life.

Besides an engaging narrative, the film also features some gorgeous cinematography full of golden wheat fields, dusty sunsets, tall corn fields, rustic red barns, long country roads, the carnival lights of state fairs, and cozy old farm houses that perfectly encapsulate the feeling of small family farms. The atmosphere really reminded me of my own upbringing on a ranch and just how the simple things could seem the most magical.

The film is more family drama than thriller or fantasy film, but I thoroughly enjoyed it. There is just something entrancing about the film that makes you want to see it through to the end.

You can watch it now on Netflix or buy it on Amazon!
Posted by Sarah E. Jahier at 1:30 PM