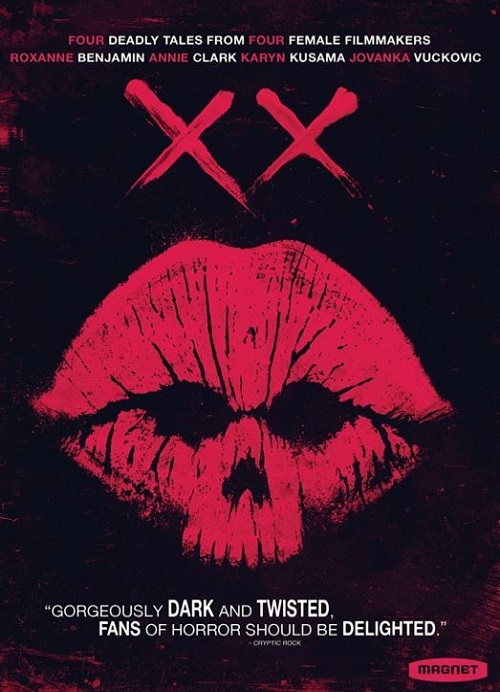 I am so behind on my Netflix recommendations, please accept my apologies! Netflix doesn't seem to be releasing many new horror movies lately, but there are still some gems to be found. I recently revisited the horror anthology film XX, which was added to Netflix streaming not too long ago. This horror anthology is unique in that each segment is directed by a woman and each story is told from a female point of view. I had seen it previously but remember being underwhelmed. However, I decided to give it another shot and actually liked it a lot better the second time around!

"The Box" is based off a short Jack Ketchum tale and is written and directed by filmmaker/ex-Rue Morgue editor Jovanka Vuckovic. In the short, a woman's son starts to act weird after looking inside the box of a stranger's Christmas present. This is one of my favorites of the anthology - the mystery surrounding the box and all the performances from the actors make this an unsettling and engaging short film.

"The Birthday Party", written by filmmaker Roxanne Benjamin (Southbound, V/H/S) and Annie Clark (aka musician St. Vincent) and directed by Annie Clark is about a woman who tries to keep up appearances for her daughter's birthday party after an untimely death in their opulent home. This one has some beautiful set pieces, but is my least favorite of the bunch since it doesn't have enough of a storyline to hold my interest. However, that doesn't mean I didn't enjoy it - it did have some tense moments and I did like the macabre humor.

"Don't Fall" is written and directed by Roxanne Benjamin, where a group of friends camping find some strange pictographs in the desert, resulting in a nightmarish vacation. This is my favorite short in the entire anthology! I love the creepy pictographs and how the story develops. This would be interesting to see developing into a feature length movie.

"Her Only Living Son" is written and directed by filmmaker Karyn Kusama (The Invitation, Jennifer's Body) and tells about a mother who must deal with the son from hell. This one contains some disturbing animal abuse (thankfully short-lived), but I did like the direction it progresses to (I don't want to say anything else that could spoil it).

There is also a stunning series of stop-motion shorts featuring doll parts and doll houses by Sofia Carrillo that I very much enjoy! These are whimsical and entrancing, and complement the shorts nicely.

The anthology features quite a variety of short films, and I enjoy them all in their own way. It is also refreshing to see horror films from a female perspective with female protagonists. Some of the writers/directors of these shorts are already familiar names, and I hope we continue to see more from all these talented women!

You can watch XX streaming on Netflix or buy it on Amazon!
Posted by Sarah E. Jahier at 3:30 PM