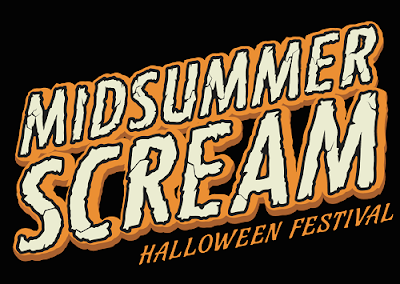 I am so excited that Midsummer Scream is just a week and a half away! The "World’s Largest Halloween and Horror Convention" is projected to thrill more than 20,000 ghoulish guests at Long Beach Convention Center July 28th and 29th, 2018 with what promises to be their biggest year ever! Check out the thrills and chills they have planned this year in the official press release below:

LONG BEACH, CA - Midsummer Scream, the world’s largest Halloween and horror convention, returns July 28-29 to the Long Beach Convention Center for a weekend of chilling delights. More than 20,000 fans of all things macabre will descend on Southern California from near and far to witness and participate in Midsummer’s biggest production yet, returning for its third year to Los Angeles.

For the first time ever, Midsummer Scream is actively bridging the gap between East and West Coast haunters and fans, with the inclusion of several prominent individuals from the Central Florida community on hand. These special guests include Mike Aiello, Senior Director of Entertainment Creative Development, Universal Orlando Resort; Scott Swenson, beloved by fans for his involvement with Busch Gardens Tampa Bay Howl-O-Scream, and Vault of Souls haunted attraction; and Ricky Brigante, Founder of Inside the Magic, and Producer at Pseudonym Productions.

Other presentations for 2018 that will thrill audiences include an Elvira, Mistress of the Dark 30th Anniversary career retrospective with Cassandra Peterson; a 25th Anniversary of Hocus Pocus presentation featuring a panel of creatives responsible for bringing the classic movie to life; various immersive experience discussions with leading industry pros; an exclusive behind-the-scenes look at the upcoming documentary Epic Home Haunts; exciting presentations by media powerhouses Buzzfeed Unsolved, and Shockwaves LIVE! featuring filmmaker Tom Holland; and much more!

Massive Show Floor
This year’s vendor show floor will feature over 250 spooky vendors and talented artisans selling everything from unique art to clothing, jewelry, decorative sculptures, Halloween decorations, professional haunt props, and everything in between.

In addition to an amazing array of shopping options, the show floor is abuzz with fantastic activations as well, including a children’s arts and crafts area, escape room experiences, virtual reality exhibits, stunning makeup demonstrations, make-and-take classes, photo ops, and even an on-the-spot interview center for Knott’s Scary Farm where they will be seeking numerous souls to hire for this year’s Haunt event.

Thrilling Hall of Shadows
Midsummer Scream’s thrilling Hall of Shadows will return in 2018, taking up residence in its own 80,000-square-foot hall within the Long Beach Convention Center. This extremely popular component of Midsummer Scream is a virtual Halloween theme park set in the dark, where brave visitors can trek through more than a dozen haunted house attractions, check out stunning live performances by the high-energy Decayed Brigade "slider" team, and enjoy a creepy assortment of artists on the Hall’s first-ever performance stage. This year, the Hall of Shadows will also include a hand-picked selection of exhibitors and vendors showing off their wares under very dim, ambient light.

All the thrills and chills of Hall of Shadows take place behind a massive Castle Frankenstein façade and entry experience celebrating the 200th Anniversary of Mary Shelley’s classic novel, brought to life by the incredibly talented men and women of CalHauntS.

Ghastly Entertainment Options
Guests attending Midsummer Scream will find all areas of the venue oozing with live entertainment, from the Hall of Shadows to the Theatre Macabre. Force of Nature Productions returns for its second year at Midsummer with a chilling new experience, and Zombie Joe’s Underground Theatre Group returns once again to shock and delight with yet another installment of their wildly-popular, adults-only show, Urban Death.

In addition to live theatre, scary flicks, and twisted performances, Midsummer Scream encourages - and attracts - cosplayers from across the United States dressing up as favorite characters, horror icons, and just about everything else scary or sexy…or both!

Black Cat Adoptions
Midsummer Scream proudly partners with Kitten Rescue Los Angeles once again, creating the fan-favorite Black Cat Lounge - an adorable free-roam kitty zone where guests can play with, cuddle, and adopt very special pets in need of forever homes. While the Midsummer Scream team loves everything scary, they firmly believe no animal in need of love should live in fear, which is why they invite guests to open their hearts and homes to these wonderful kitties each year.

Special Guest Appearances
While Midsummer Scream isn’t an "autograph show" and it doesn’t feature a "celebrity row" like other conventions, the show does attract celebrities who often appear with vendors at their booths on the show floor. In some cases, celebrities attending Midsummer will sign autographs and take photos with fans for an additional fee. Confirmed special guests for 2018 include Cassandra Peterson (Elvira, Mistress of the Dark), Bela Lugosi Jr., Robert Mukes (House of 1000 Corpses, Westworld), Philip Friedman (Insidious), LeeAnna Vamp (actress, cosplay queen), Kimberly J. Brown (Halloweentown), Barbara Magnolfi (Susperia), and more. Keep your eyelids peeled…you never know who you’ll bump into at Midsummer Scream!

Midsummer Scream After Dark
When the sun goes down on Saturday, July 28, things really get wicked at Midsummer Scream After Dark. This after-hours party for guests 18+ will include a live DJ spinning a ghoulishly fabulous catalog of dark wave and goth favorites in the Grand Ballroom, a costume contest where the winner will crawl home with a $500 cash prize, a special screening of Child’s Play with director Tom Holland giving live commentary, an extra-naughty magic show by Mudd the Magnificent, and ample space to chill with a cocktail and network the night away with friends old and new.

Tickets for Midsummer Scream 2018 are now on sale at https://midsummerscream.org/, including a special Gold Bat Weekend Pass, which gives guests priority entry to all panel presentations, front of line access to each of the haunts in Hall of Shadows, an hour early entry each day at 10AM to the show floor and Hall of Shadows, and complimentary admission to Midsummer Scream After Dark!