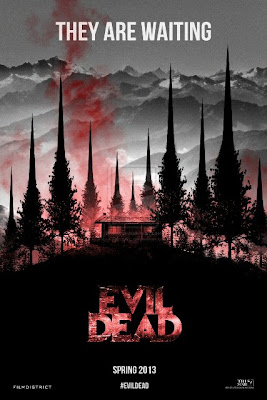 Ghouls, most of you know I retired from reviewing horror movies quite some time ago, but seeing Evil Dead Thursday night has inspired me to do a quick little review of the movie!

When I first heard about the Evil Dead remake, I pretty had the same reaction as I do for most “reimagings”…rolling my eyes and thinking “another one?” I didn't have much faith in the project AT ALL and wrote it off as another insipid remake. Months passed, and then the teasers and trailers came and with each one I felt my interest pique more and more, until I got to the point where I was actually excited for the movie.

I very rarely see movies on opening weekend cuz I am getting crotchety in my old age and if I go to a packed theater I usually grumble about those rude jerks who think it is ok to talk or play with their cell phones the whole movie. Plus it’s expensive!! However, I’ll make an exception for movies that I am really, really excited about…like this one. I even went to a 10 PM Thursday showing of the flick even though I had to get up for work at 5 AM on Friday (which means I barely got 4 hours sleep). I braved the obnoxiousness of the crowds last night and you know what? The crowd was so groovy and just as excited for the flick as I was so I didn't even care that we were packed into the theater like sardines! Plus we got there super early to ensure primo seating and proper snacks.

Even though I was stoked for the movie, I tried to keep my expectations in check. Remakes are notorious for letting fans down, but I was really hoping this one would live up to the buzz!

The film was an extremely bloody, clever remake that walked the fine line between serious scares and pure fun. I really love how director Fede Alvarez (who also co-wrote the film with Diablo Cody and Rodo Sayagues) broke up the somber tension with gleefully over-the-top gore and several laugh-out-loud moments. One minute it is cleverly winking at you and the next minute it is making you jump out of your seat!

Speaking of scares, the film has plenty! And these aren’t your typical jump scares either, but are much more insidious and creep up on you. Plus, if the scares don’t get you the ooey-gooey gore will! This film is drenched in blood and its practical FX are pretty damn impressive (no CGI was used that I could notice). Severed limbs, stabbings, gunshot wounds, rotting skin, people burned alive, self-mutilation, nail gun wounds, and so on – this flick has it all!

This isn't just a brainless gorefest, though, because I also liked how Alvarez, Cody and Sayagues revamped the story. I especially appreciated the backstory as to why the five friends are at the remote cabin in the first place, which was really quite clever and acts as the perfect cover for the demonic presence to take possession of a certain character without the other characters suspecting anything out-of-the-ordinary until it is too late. And of course there is a nice little surprise at the end that turns your assumptions about certain characters on their head! These layers that were added to the original story really lend themselves well to the film and elevate it beyond a simple remake to a film that stands on its own.

I have to give props to the whole cast for great performances, but specifically I loved Jan Levy as Mia and Lou Taylor Pucci as Eric. Pucci got the most laughs from me with his character’s straight-faced wisecracks. And Levy did an amazing job as the first to fall victim to the demonic forces. This film really shows off her range as an actress, which may seem weird coming from a horror film, but it’s true! From vulnerable to evil to badass, she was a firecracker!

All in all, Evil Dead was a fun film that I had an awesome time watching. It’s got scares, some tongue-in-cheek laughs, and rivers of blood. It doesn't step on the original’s toes and actually builds and expands on the original story in a clever way.

Go see it, now!! And stay through until after the credits for a groovy surprise!
Posted by Sarah E. Jahier at 9:27 AM