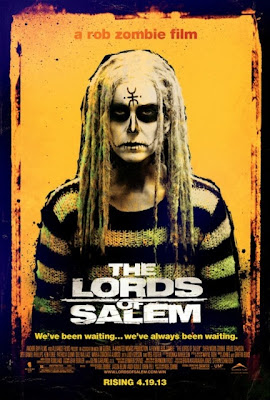 Believe it or not, The Lords of Salem was a movie I was eagerly anticipating. I know that this film has either been under the radar or just plain dismissed by many people, but I was honestly looking forward to it ever since I saw the leaked footage of a teaser shown at a Rob Zombie concert. It’s not that I am a big Zombie fan; sure, I dig most of his music but his films are a different story and the only one I truly enjoyed was The Devil’s Rejects. The Lords of Salem felt different than his other film projects, though. The Lords somehow seemed special and I gleefully anticipating its release.

It finally saw a limited release in theaters this weekend, and luckily it was playing at a theater near me. I had heard mixed things about the film (pretty much either “I loved it!” or “I hated it!”) going into it, but I stayed away from reading any reviews and tried to go in with an open mind. I knew it was going to be different than his other films, heavy on visuals and light on story.

The story is about a Salem, Massachusetts DJ named Heidi (Sheri Moon Zombie) who receives a vinyl record from “The Lords”, which contains one ominous-sounding song. The song seems to be mysteriously linked to “the lords of Salem”, a coven of witches who worshiped Satan and were burned at the stake in the Salem Witch Trials. Heidi soon starts having strange visions of the witches…have the lords returned for revenge or is Heidi slipping into madness? 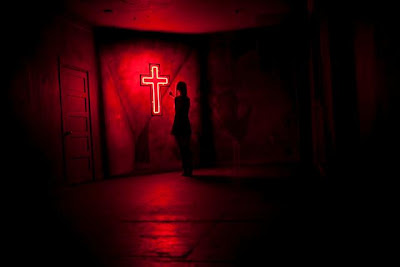 What lurks in apartment #5?

Well, I can say that I wasn't disappointed in the film and that The Lords of Salem may be my favorite Rob Zombie film to date! I know many people might not enjoy it as much as I did – it has a sparse narrative and instead relies heavily on nightmarish visuals with shocking iconography (plus some awesome sound design and music). Sure, there are some moments that are a bit too over the top (like the sequence at the end that felt a bit too much like a shock-rock music video trying its hardest to blaspheme everything), but for the most part it was a real dark pleasure.

Its visuals reminded me a lot of the older Satanic worshiper/witch films, like the disturbing The Devils from 1971, but its structure also reminded me of the Italian horror films from the ‘70s/’80s. I adore those movies, but they rely solely on an emotional gut reaction rather than be founded on rationale. Lords of Salem is a lot like that, featuring stunning visuals and eliciting an emotional response of dread rather that focus only on a linear storyline. It felt looser, freer and definitely more dangerous not knowing exactly what was real and what wasn't in the film! God, and some of the visuals will haunt me for days!

The feelings of unease and dread were helped immensely by the genius sound design and soundtrack. The music was done by none other than John 5 (best known for his guitar work in Marilyn Mason). The song Heidi hears by the Lords is a simple but discordant piece of music that managed to raise goosebumps on my arms every time I heard it in the film – and it is played again and again. It is so deliciously dark and ominous – I loved every note of it! 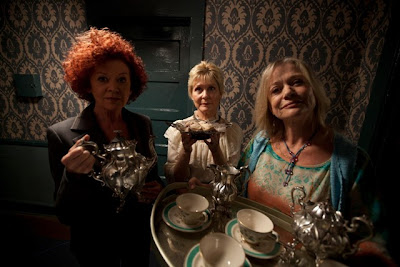 I also enjoyed the performances in the film. Sheri Moon Zombie, whose performances can sometimes grate on my nerves, played the strong but lost Heidi perfectly. I sympathized with her and really felt like I was there experiencing hell with her. The other actors really shined as well, especially Judy Geeson who played Heidi’s overly concerned landlord and her two sisters, played by Patricia Quinn (Magenta from Rocky Horror Picture Show!) and Dee Wallace (who needs no introduction if you’re a horror fan). Ken Foree and Jeffrey Daniel Phillips are also excellent as Heidi’s fellow DJ’s.

The performances were awesome, but another thing I appreciated were that all the effects in the movie were practical – no CGI or any other digital nonsense, just plain creepy creatures and nightmarish visages that truly looked like they had crawled from the pits of hell. And if I had witnessed some of those monsters in real life, you bet your bottom dollar I would go insane…and that’s if I was lucky! Some truly demented creatures were spawned from Rob Zombie’s nightmares and put into this movie, let me tell ya!

The Lords of Salem is not your typical horror movie. Most people won’t even like its hallucinogenic feel, but I for one adored this crazy concoction of witches, Satanism, creepy creatures, curses and one lone rocker trying to make sense of some astoundingly eerie visuals. It was recently announced that this may be Rob Zombie’s last horror film, and though this is sad considering the potential he showed in this movie, I also think that if this is Zombie’s last horror film at least he’ll go out with a bang!

Rob Zombie also wrote a Lords of Salem book, which I am very excited to read as it goes into much more detail than the movie!

The Lords of Salem DVD on Amazon

The Lords of Salem book on Amazon

The Lords of Salem soundtrack on Amazon