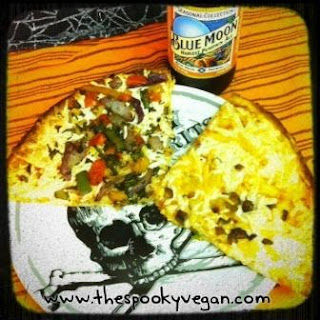 Daiya Fire Roasted Vegetable Pizza and Mushroom and Garlic Pizza slices,
plus some Blue Moon Pumpkin Ale I had been saving for a special occasion

Pizza is my absolute favorite vegan junk food...I love kicking back and enjoying a big pizza pie and a horror movie any day of the week! When that pizza craving hits, I usually go one of three routes: I either make my own pizza with hand-rolled dough topped with tomato sauce, Daiya cheese and pineapple chunks, buy the Amy's Roasted Vegetable Pizza, or, if I'm feeling indulgent, I'll order the Berkeley Vegan from Zpizza.

I was excited to hear Daiya was making their own frozen vegan pizzas, thus giving vegans even more options when it comes to noshing down on some pizza pies!

I was finally able to score some of these new pizzas in the frozen section of Whole Foods (on Vegan Pizza Day no less!!). I took home the Fire Roasted Vegetable Pizza and the Mushroom and Garlic Pizza at the cost of $9.99 each (ouch!). I got home, preheated my oven, and unwrapped my pricey pizzas...only to find they were pretty small compared to the cardboard box they were in. I also noticed they had a pretty thin crust, though I didn't see anything advertising them as such on the box besides that they are gluten-free, so maybe that had something to do with it.

The pizzas crisped up nicely in the oven, and the extra crisp of the thin crust worked well with the subtle flavors. The Fire Roasted Vegetable Pizza was okay, but I prefer the Amy's Roasted Vegetable Pizza, which has more flavor, even without having cheese on it. I liked the Mushroom and Garlic Pizza better as it had more flavor, but it was still lacking. I think both pizzas could have used more sauce, thicker crusts, better flavors and a more even distribution of toppings (see pic above for an idea of clumped together the toppings were).

I also couldn't get over how small these pizzas were. Sure, they run about the same size as the Amy's pizza I am used to buying, but the boxes they come in make it look like the pizzas would be bigger. The price was a bit steep for what you get. Two Daiya pizzas barely fed two people, and that was $20 worth of pizza. It felt more like eating an expensive appetizer than a meal, especially when I can buy an extra large Berkeley Vegan AND have it delivered for around $25 and it feeds more people.

Overall, I was let down with the Daiya pizzas I tried. The flavor was lacking, the size was definitely lacking and they just didn't compare to other pizzas out there or to Daiya's other products. I would probably not buy again unless they were the only vegan pizzas available.
Posted by Sarah E. Jahier at 8:15 AM