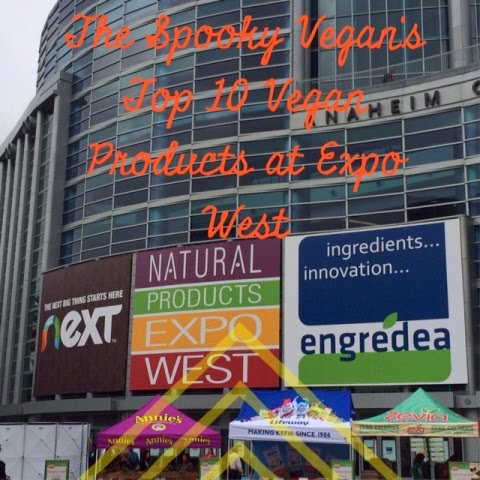 This year was the first time I attended the Natural Products Expo West, held every year at the Anaheim Convention Center, which is only about 20 minutes from my house. I was super-excited to be able to attend the Expo, where companies show off their latest and greatest products. Lots of vegan companies were in attendance (represent!), so I was able to check out many, many new products as well as stuffing my face with samples of my favorite vegan foods. Yes, I ate LOTS and LOTS of samples, but it was all for you, dear readers! I just HAD to eat every vegan thing in sight so I could dutifully report my findings to you, right? Righhhhhtttt...

Anywho, I had a great time (though my pants beg to differ), and though I tried lots of yummy things over the Expo weekend, I had some clear favorites that I just cannot stop drooling over and dreaming about. Check out the next big things in veganism below! 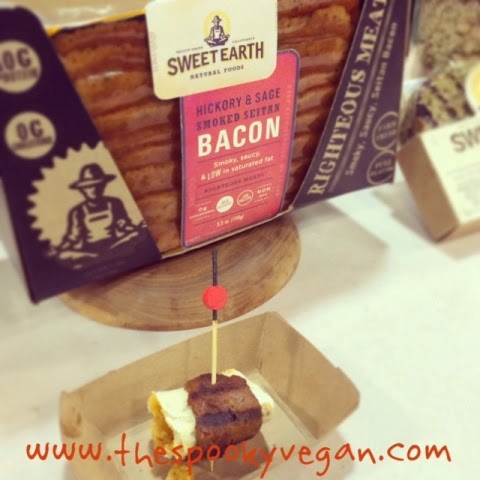 1) Sweet Earth Natural Foods' Hickory and Sage Smoked Seitan Bacon - I have no words for how good this was! I was familiar with the company (they have a vegan breakfast burrito that I am fond of), but I think this vegan bacon will definitely catapult them onto the vegan spotlight! Sweet Earth's bacon wasn't overly chewy or tough (like some vegan bacon varieties that shall remain nameless), but had just the right balance of crunch and bite with lots of savory, smoky flavor. When I had a sample, they gave it to me wrapped their breakfast burrito (picture above) and OMG, it was heavenly! Like, I think the heavens opened up for a second and angels were singing...THAT GOOD! This product isn't in stores yet, but hopefully we see it sooner rather than later because I am seriously craving it! Find more info on www.sweetearthfoods.com. 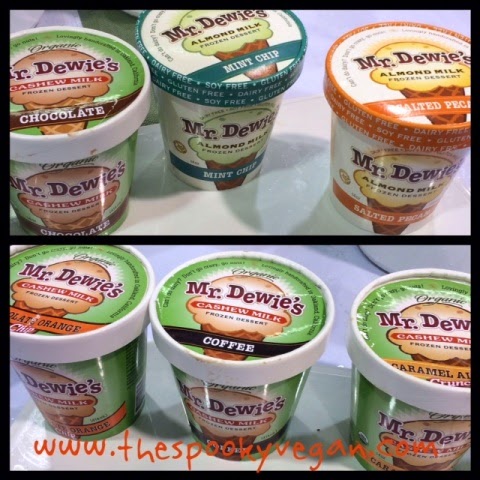 2) Mr. Dewie's Frozen Dessert - Confession: I ate SO much vegan ice cream at the Expo! I enjoyed most of them, but I loved one brand so much I think I have an OBSESSION with them now! Mr. Dewie's Frozen Dessert makes almond milk ice cream in Strawberry, Mint Chip, Salted Pecan and Mocha Chip, but they just unveiled a new cashew milk line that is to die for! The new cashew milk flavors are Chocolate Orange Chip, Chocolate, Caramel Almond Crunch and Coffee (my personal fave!). So creamy! So flavorful! So good! Bonus: the two founders are brothers and just about the nicest, coolest guys ever! I can't wait until their products are available in Southern California so I can fill my freezer with ALL their products! Visit them online at www.mrdewies.com! 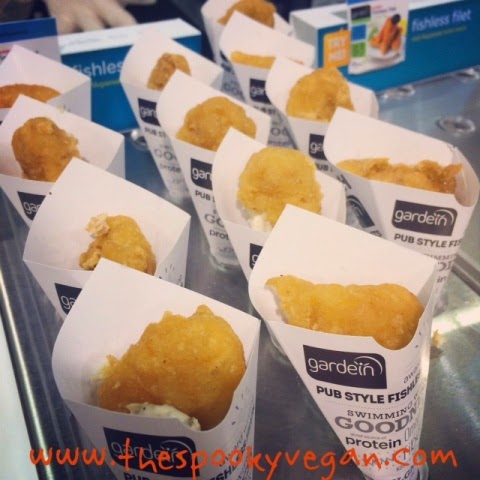 3) Gardein's Golden Fishless Filets - I think these were the most talked-about item at the Expo. Served hot with tartar sauce and a squeeze of lemon, these Fishless Filets were insane! Their texture mimicked the look/feel of fish and the taste was just phenomenal. I can't wait to use these to make fishless tacos! These are already swimming into stores, so keep an eye out! You can also check availability of these Fishless Filets to see if they are in your local store by checking out www.gardein.com. 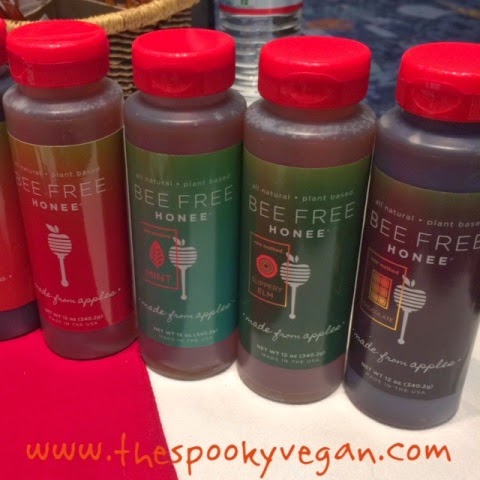 4) Bee Free Honee's New Flavors - I first got to try Bee Free Honee from a vegan swap box and fell head-over-heels for it! It is made from apples and perfectly duplicates the look, feel and taste of bee-based honey, without harming any bees! I love it in my tea, in oatmeal, in sauces, for baking, and in anything you want to add some extra sweetness to. When I saw them at the Expo, I was so stoked to learn they are releasing four more flavors - Slippery Elm, Mint, Chocolate and Ancho Chile! The Slippery Elm will help with sore throats and other medicinal purposes (and it tastes great!), while the other three will add different flavor profiles to dishes. Keep up with the latest on their website! 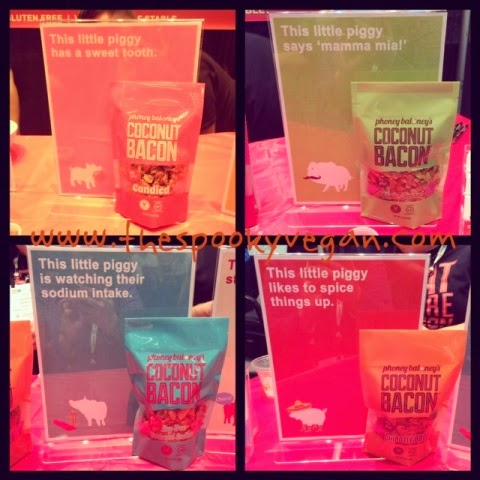 5) Phoney Baloney's New Coconut Bacon Flavors - I've been a long-time supporter/snacker of Phoney Baloney's coconut bacon, which in my opinion is already the best vegan coconut bacon out there, so I was absolutely ecstatic to try their four new flavors at the Expo! In fact, theirs was the first booth I made a beeline for on the first day! And I'm glad I did, because their new flavors are phenomenal and their booth was swarmed with coconut bacon lovers alllllll Expo! The new flavors are Chipotle BBQ, Apple Fennel, Candied, and a new soy-free, low-salt blend. I loved them all, but I was reallllly partial to the Candied and Apple Fennel! I can't wait to snack on the Candied flavor straight outta the bag and sprinkle the Apple Fennel on everything! These will be released in stores soon, or once they are available you can also order them on www.phoneybaloneys.com! 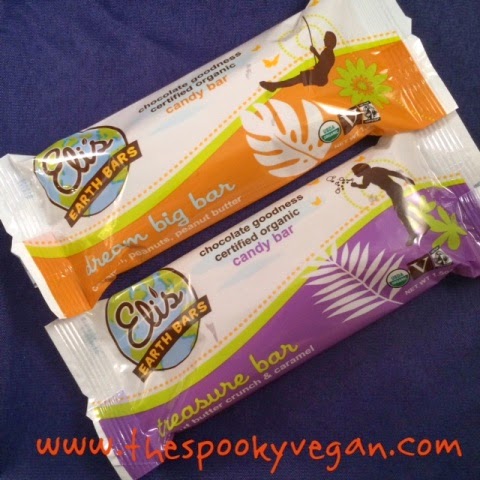 6) Sjaak's Organic Chocolates' Eli's Earth Bars - I'm not sure if these are new or not, but I'm adding them since I have never seen them available before. The famous vegan chocolatier Jacques (who was actually working the booth and is as sweet as can be), named these amazing chocolate bars for his grandson. There are three different flavors, the Dream Big Bar (caramel and peanut butter topped with whole peanuts and coated in creamy vegan "milk" chocolate), the Treasure Bar (a solid layer of crunchy peanut butter topped with caramel and coated in creamy vegan "milk" chocolate), and the Celebrate Bar (a delicious coconut caramel topped with whole almonds surrounded by chocolate). I think I had the Treasure Bar, and it reminded me of a Butterfinger combined with a Reese's combined with a Snickers combined with a Twix (though it has been a very long time since I've had any of those). It was so dang delicious! I want to order them all plus everything else from the Sjaak's site! 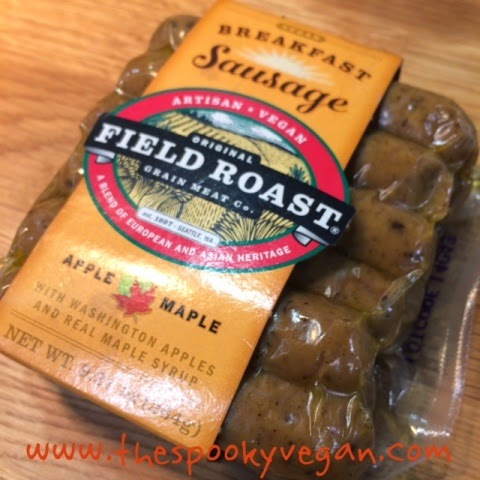 7) Field Roast's Apple Maple Sausage - Vegans are getting super-spoiled on rad new breakfast items, like this soon-to-be-available Apple Maple Sausage from the always-amazing Field Roast! These were the size of breakfast links, but packed a powerful punch in the flavor department, with a sweet, autumn-like flavor. The texture was also great and chewy (without being tough). Field Roast hopes to have these out in stores sometime this year; for updates visit their site! 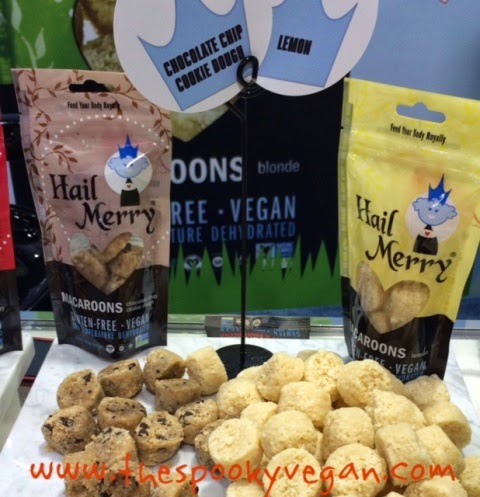 Hail Merry's two new flavors - Chocolate Chip Cookie Dough and Lemon!
As you can see I basically ate all their stock of Cookie Dough!

8) Hail Merry's Chocolate Chip Cookie Dough Macaroons - Hail Merry makes some amazing raw vegan desserts, among them some supremely tasty macaroons! Hail Merry released two new flavors at the Expo, Lemon and Chocolate Chip Cookie Dough. Of course, I went straight for the Cookie Dough! It tasted just like straight-up cookie dough, was decadently chocolaty, and just melt-in-your-mouth delicious. This is definitely my new favorite flavor, and I will be keeping an eye out for it to be released! More info on the Hail Merry can be found on www.hailmerry.com. 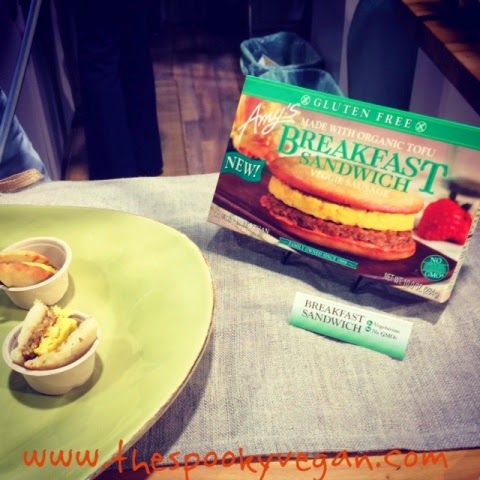 9) Amy's Kitchen Breakfast Sandwich - Whoa, guess what we are getting?! A vegan, gluten-free breakfast sammie that actually tastes GOOD! Huzzah! Amy's Kitchen will be releasing these bad boys soon, and I was really impressed by how yummy they tasted! They are a delicious mouthful of organic tofu and veggie sausage placed between some fluffy English-muffin type bread (it was like an English muffin, only flatter). No word on when these might be available, but for more info check the Amy's website! 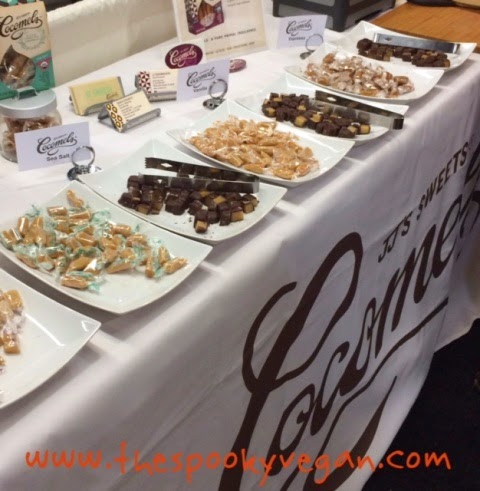 The JJ's Sweets Cocomel's booth, where I just wanted to upend the contents
of their serving plates right into my mouth!

10) JJ's Sweets Chocolate-Covered Cocomel's - Cocomel's vegan caramels have been have long been a decadent treat for me - they are just so silky, melt-in-your-mouth delicious that they feel sinful! And you know what just made them even more wicked? Covering them in chocolate!! That's right, JJ's Sweets now offers three flavors of chocolate-covered Cocomel's, including Sea Salt, Espresso, and Vanilla. I tried both the Sea Salt and Espresso varieties at the Expo, and they were even more sexy than the regular Cocomel's! You can find them in stores or order them from their www.jjssweets.com.

The Expo was awe-inspiring...so many vegan products, so little time!! I definitely didn't see everything, so I'm sure I missed some amazing vegan products. The ones stated above that I tried, plus most all the other vegan samples I had, were impressive and I am so happy to see veganism taking a firm foothold at the Natural Products Expo!

May we usher in the golden age of veganism! 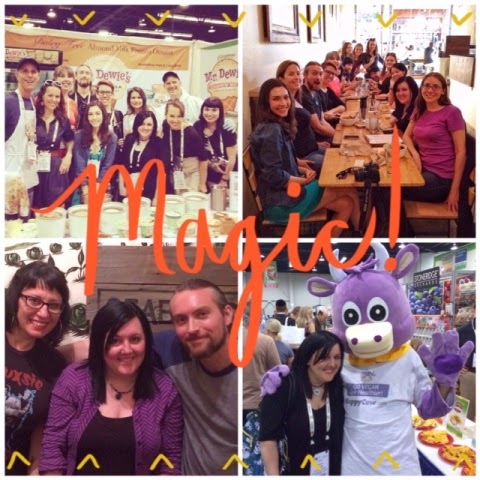 So many amazing people! First pic in the top right is a bunch of us press peeps
with the brothers behind Mr. Dewie's - Colleen Holland, founder of VegNews,
is even in the pic! In the top right photo a bunch of us grabbed dinner at Seabirds
after the last day of the Expo; lower right pic is Happy Cown and me; lower left
is me with Isa Moskowitz and John of Laziest Vegans!

Oh, and I met some pretty awesome peeps at the Expo! Big shout outs to my Expo buddy John from Laziest Vegans in the World who put up with me for a few days and to Isa Moskowitz, vegan cookbook author and all-around badass, who I was lucky enough to hang out with for a day. 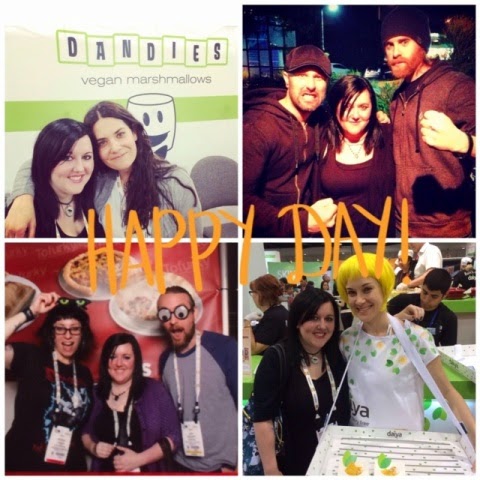 More awesome peeps - top left is Mary from Chicago Vegan Foods (makers of
the delectable Dandies marshmallows), top right is me and the Vegan Zombie
dudes, Jon and Chris; lower right is Daiya girl Hannah and me, lower left is
another one of Isa, John and I, this time at the Tofurky photo booth!

I also got to meet and hang out with kick-ass vegans who I had previously only connected with through the internets! I am so grateful to have spent a weekend eating awesome vegan food and being inspired by like-minded people...I am already counting the days until next year (March 5 - 8, 2015...mark your calendars!).

You can see more pics from the Expo by checking out my Instagram!
Posted by Sarah E. Jahier at 8:00 AM