I have SUCH exciting news, ghouls and boils! I wrote my first article for Vegansaurus about "5 Must-Try Vegan Options in Orange County" and it was published this past Monday!!! I am so over-the-moon excited about this because 1) Vegansaurus straight up rocks and you should be reading it regularly if you aren't already, 2) Vegansaurus has always been there for me on my vegan journey and I could always rely on them for straight talk peppered with sass! It truly is an honor to see my writing on a site I have read for years and years now!

You can check out the article on the "5 Must-Try Vegan Options in Orange County" on Vegansaurus or read all about these awesome places below.

I’m gonna let you in on a little secret: while LA is undoubtedly the vegan Mecca in Southern California, Orange County isn't far behind. Orange County is located between Los Angeles and San Diego, roughly an hour from each, and has amassed quite a collection of excellent vegan restaurants that are definitely worth the visit.

Since it would probably take at least a few dozen paragraphs to tell you about all the vegan options in Orange County, I've decided to spare you a wall of text and instead recommend restaurants based on meal-times throughout the day, from brunch to a late night snack. A lot of people will be coming to town this upcoming weekend to attend the Natural Products Expo, not to mention those who visit for the beaches or Disneyland on a regular basis, so now is the perfect time to recommend the best vegan options for those on a tight schedule or for those that may only be visiting Orange County for a day or two. I've only included restaurants that are unique to Orange County so you can maximize your time and try new things! There used to be limited options for breakfast or brunch for vegans in Orange County, but no more! Though there are several options for vegan brunch, my number one go-to is Seabirds Kitchen. Seabirds started off as a vegan food truck in Orange County (you probably saw them on Food Network’s The Great Food Truck Race), but recently opened a brick and mortar location in Costa Mesa. I am a big fan of all their menu items at any time of the day, but you can usually find me there for their weekend brunches, which feature seasonal mouth-watering creations like huevos rancheros, waffles, breakfast quesadillas, breakfast bowls and the best Bloody Mary I've ever tasted (bonus points: it is served with fried pickles as garnish!). If you have room, make sure to try their chaffle, a decadent half waffle, half churro creation topped with coconut sorbet. Brunch is served on Saturdays and Sundays from 10 am to 1 pm. 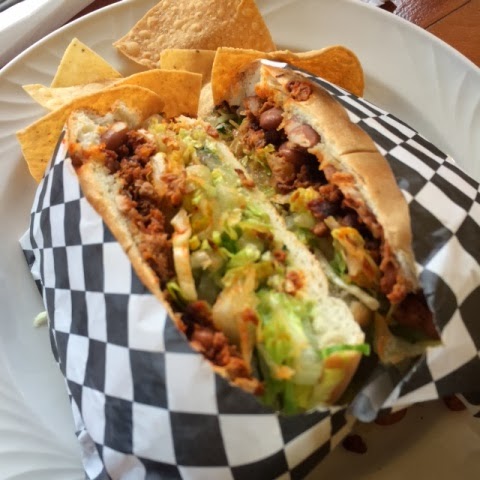 The vegan torta with Soyrizo at Tacos Cancun

Tacos Cancun is a tiny hole-in-the-wall Mexican restaurant that has a whole separate vegan menu. Not only that, but they also have a separate grill for preparing vegan food. They actually get it, guys!! They have all sorts of vegan dishes you can order with soy “beef”, Soyrizo or even vegan “chicken.” My favorite is the torta, which I order with Soyrizo, and is kinda like a Sloppy Joe (dare I say Sloppy José?). I’m also a fan of the vegan nachos, which are HUGE, and topped with vegan cheese, vegan sour cream, beans, and all sorts of other goodies. You also HAVE to get the vegan horchata, which is served in a fancy wine goblet so you feel all fancy. If you happen to be there on a Mondays, also ask them about their vegan special, which in the past has included homemade tamales or chile rellenos. Don’t forget to order their vegan fried ice cream, too! A quick tip: you need to specifically ask for the vegan option when ordering since they aren't a strictly all-vegan restaurant. 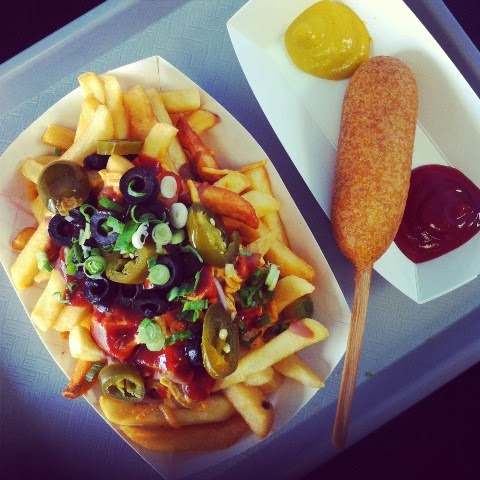 Mid-Afternoon Snack: Vegan Pizza in Garden Grove, CA The perfect place to grab a mid-afternoon snack to tide you over until dinner is located in Garden Grove, about 10 minutes away from Disneyland. And the perfect snack? Vegan corn dogs! Though the restaurant name is Vegan Pizza (and their pizzas are delectably delicious), my favorite item on the menu is the corn dog, made with a veggie dog that’s dipped in some kind of magical batter that gets deep fried to glorious perfection! Dinner: Au Lac in Fountain Valley, CA If you are looking for a memorable dinner, look no further than Au Lac in Fountain Valley (just outside of Huntington Beach). It may not look like much from the outside since it is situated in a strip mall, but once you step inside you are transported to an opulent dining room with deep red walls. The menu is all vegan and offers an array of Asian-inspired cooked vegan dishes as well as a full raw menu. While there are many Asian-inspired vegan restaurants in Orange County, Au Lac’s flavorful and elegant dishes make them stand out big time. 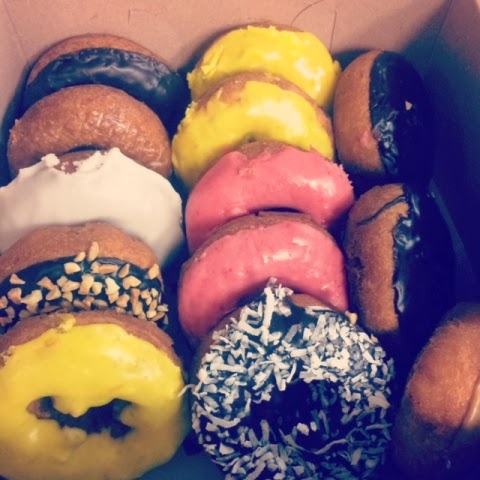 A variety of vegan donuts from The Donuttery

Late Night Snack: The Donuttery in Huntington Beach, CA Have a hankering for vegan donuts at 3 AM? The Donuttery in Huntington Beach has you covered! They are open 24-hours and though they aren't an exclusively vegan eatery, they have quite a selection of vegan donuts that keeps growing and growing! Their newest vegan flavor is blueberry, but they have plain, glazed, chocolate, maple, lemon and so many more. This is the perfect pit-stop after a late night on the town, an early morning treat or anytime you want vegan donuts (which is pretty much any and all the time for me!).

I hope to see you at one of these fine vegan or vegan-friendly establishments soon!