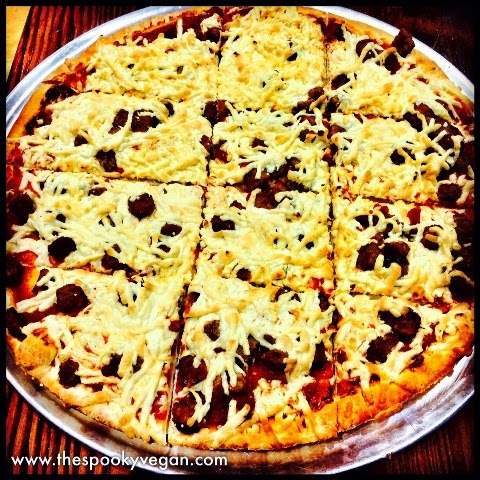 Fresh Brothers is a small chain of pizza restaurants with locations all over SoCal, though mostly centered in and around LA. I was excited that they recently opened their first Orange County location in Newport Beach (near Roger's Gardens and Fashion Island). Pizza is my lifeblood, so I was stoked to hear they had vegan options and couldn't wait to check them out! In fact, they have a special vegan section on their menu that includes a couple different kinds of pizza, plus Gardein chick'n tenders, salads, fries, and even special vegan dressings!

The vibe of Fresh Brothers was very welcoming, and their restaurant is bright and clean. There are about seven or so tables, but you can also take orders to go if it gets full. I went for dinner on a weeknight, and it wasn't too crowded. I ordered the vegan tenders with a side of fries and the vegan sausage and cheese pizza. The vegan sausage was very yummy and the vegan cheese they used was Daiya. I got their normal thin-crust, but they also have a "skinny" crust, a gluten-free crust (which is an additional $3), and a deep dish crust. I believe all are vegan, but double-check with the manager first. The person who took my order was a bit clueless about the vegan options, so I would recommend asking the manager just to verify. 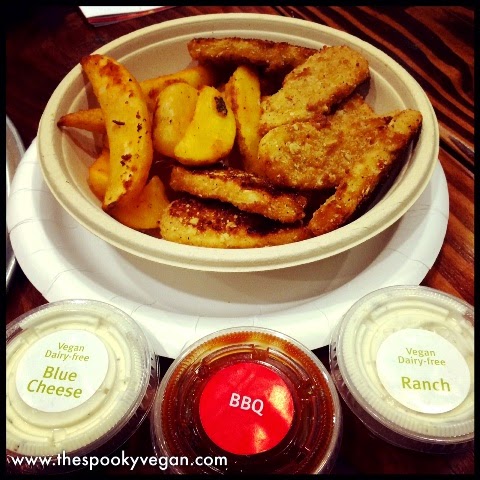 The vegan tenders were a bit pricey at $11.95 for 1/2 pound with a side of fries, but they were really tasty and cooked well! The fries were also delicious. I also liked how they were thoughtful and forward-thinking enough to offer vegan dipping sauces, including vegan blue cheese and vegan ranch sauces! 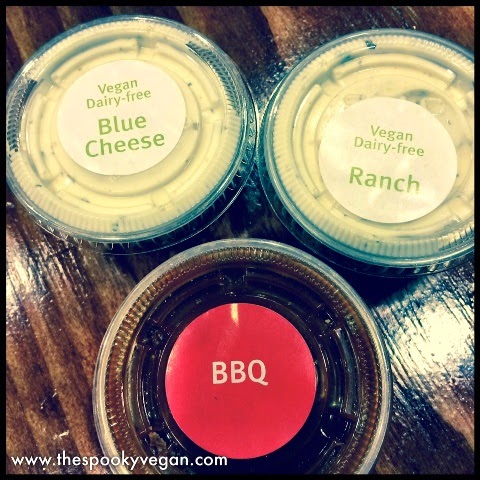 Some of the vegan sauces - Vegan Blue Cheese, Vegan Ranch and
BBQ (which they specified was also vegan).

The medium vegan pizza I ordered came out to about $12, even though on the menu it is listed as $15. Score! I really liked it...the Daiya was melted perfectly, the tomato sauce was flavorful, the crust had the perfect crunch, and the vegan sausage was yummy. I also liked how they cut it in squares instead of slices...so much easier to eat!

Besides the vegan sausage and cheese pizza, they also offer a vegan cheese pizza, but another cool thing about Fresh Brothers is that you can build your own custom pizza. They start at $11.95 for a medium and each additional topping costs about $1.50. So, you could build an epic veggie pizza should your heart so desire. They also offer a bunch of salads for those looking to get some greens along with their pizza grubbin'. 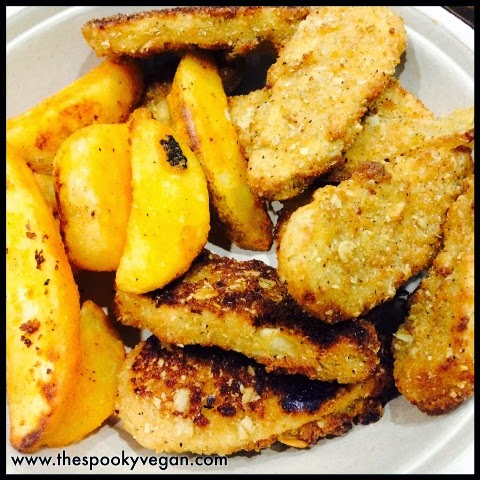 I would definitely go back to Fresh Brothers since their pizza was so dang good, my only issue was that the person taking my order didn't seem familiar with the vegan options. If their servers were a bit better educated on their vegan menu items I would recommend this place 100%. I hope they improve on this, because I am so stoked they have awesome vegan options and delicious vegan pizza!

For more info, including locations and a full menu, check out the Fresh Brothers' site!
Posted by Sarah E. Jahier at 10:30 AM