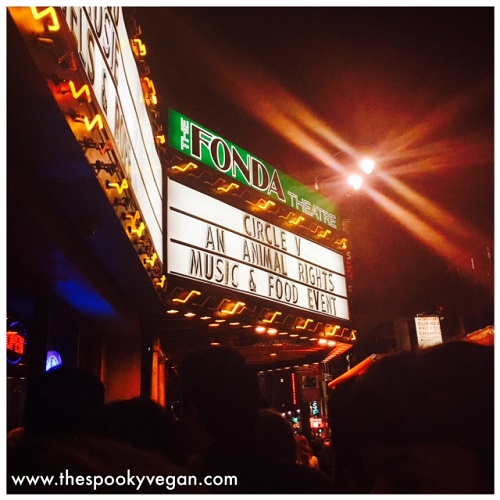 Circle V at the Fonda Theater

The first Circle V was held this past October 23rd, 2016, and was the first ever vegan food and music festival held in Los Angeles! All proceeds benefited Mercy for Animals, an amazing non-profit organization that is dedicated to preventing cruelty to farmed animals and advocates for compassionate food choices and policies, As soon as Circle V was announced months ago I knew I MUST go!

The daytime portion of the event featured vegan food from top vegan restaurants, vendors selling compassionate, cruelty-free makeup, apparel, and accessories as well as talks from famous vegans making a real difference in the animal rights movement. The nighttime portion was a concert featuring musical acts Cold Cave, Blaqk Audio, and Moby (all who happen to be vegan)! 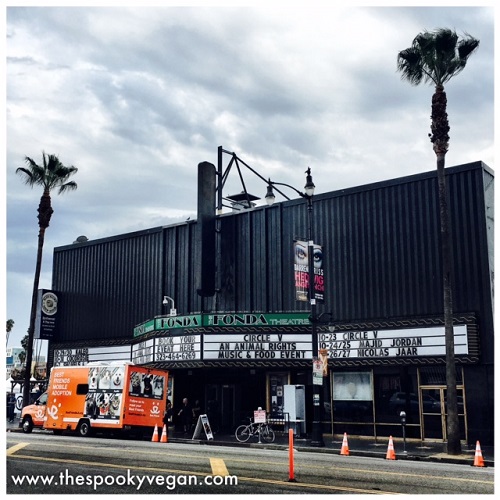 The event was held at the Fonda Theater in Hollywood. I arrived around 4PM (the daytime event started at 1PM), and there were a lot of people there even though it was sprinkling a little. Parking was easy - we found a public parking garage about a block away. I always fret about finding parking in LA, but there was plenty. 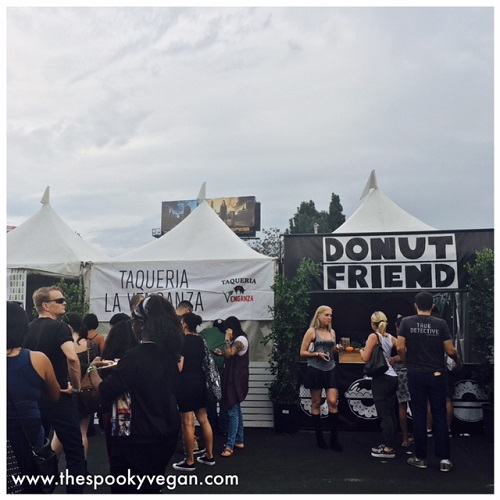 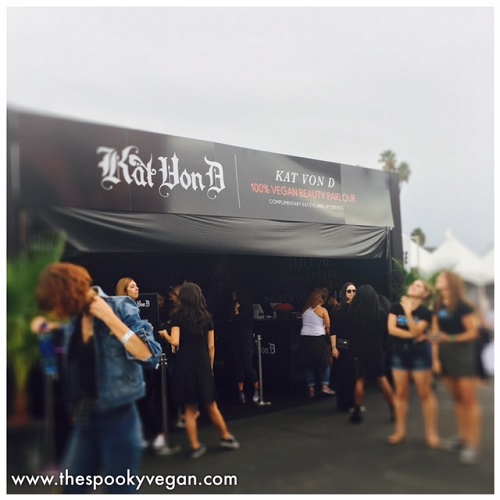 I had purchased tickets to the nighttime event (about $60, plus the Fonda's ridiculous fees), which included access to the daytime event. If you just wanted to go to the daytime event it was only $10. The daytime portion was held in the parking lot adjacent to the Fonda. There were about 20 vendors there, including Little Pine, Kat Von D, Clara Cakes, Shugah Mama, Ramen Hood, Donut Friend, Best Friends Animal Society, etc., etc., plus many speakers! I wasn't really that hungry, but I had been craving banh mi sandwiches like crazy - luckily, Mandoline Grill was there and I got their tofu banh mi sandwich. Totally hit the spot! 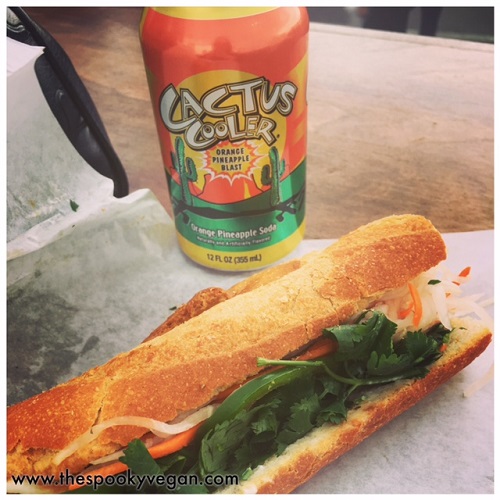 I crave Mandoline Grill's tofu banh mi ALL THE TIME! Just look at
this gorgeousness!

I stuck around for a bit chatting with friends and hiding from the unexpected rain under the speaker tent before lining up for the concert itself. The concert was sold out and it was interesting to see the wide range of people that were in attendance - there were young people, old people, people of all sorts of different styles, different backgrounds, different cultures, all coming together to raise money for animals and listen to some killer music! It was so rad to see a place packed with so many compassionate people, and the feeling of family and camaraderie there was undeniable. 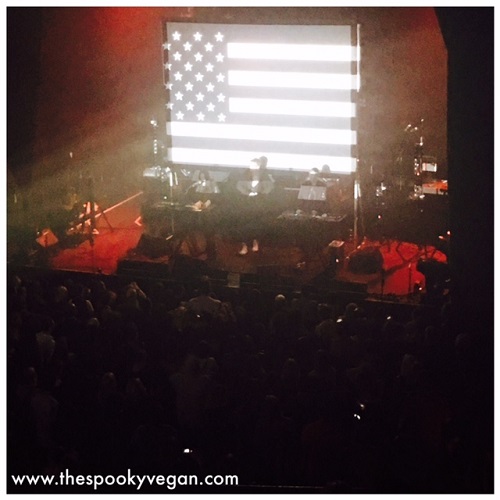 Cold Cave, I love you! 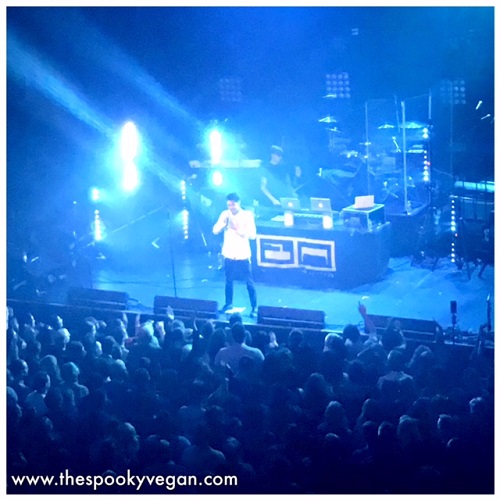 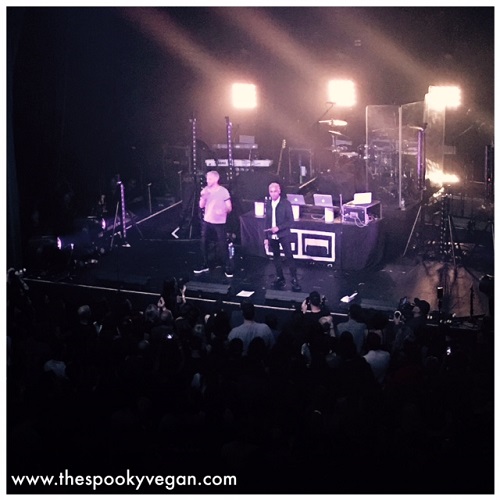 Nathan Runkle of Mercy for Animals and Tony Kanal of No Doubt
talking 'bout saving animals!

Cold Cave and Blaqk Audio put on fantastic shows, and the energy of the crowd really fantastic (except for some annoying drunk people). We also got to see Mercy for Animals founder Nathan Runkle and fellow animal activist/No Doubt member Tony Kanal talk about veganism and future plans for Circle V (spoiler: it's gonna get bigger and better!). Later, Moby hit the stage for his only live show of 2016 and the crowd went crazy - so much good, positive energy being let loose! I had to duck out early, but from all accounts it was an incredibly rad show to the end! 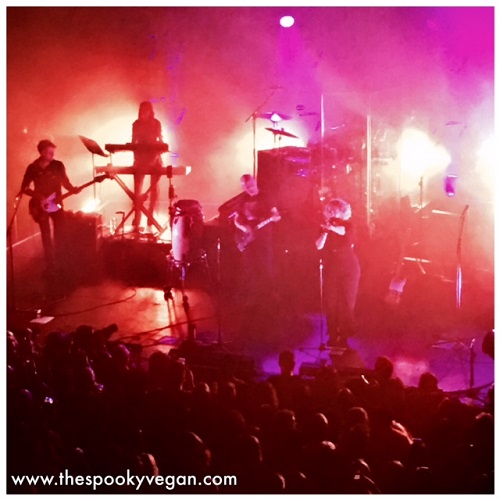 The one and only Moby! Love all he does for animals, including donating
the proceeds from his vegan restaurant Little Pine [review] to animal causes.

Circle V had a really relaxed, welcoming atmosphere. People seemed to be having a great time at both the daytime and nighttime events, and I enjoyed the laid back attitude of the fest. I'm looking forward to next year's event, as the rumor is they are courting Morrissey to headline!

Stay tuned for updates by checking out Circle V's website!
Posted by Sarah E. Jahier at 8:30 AM