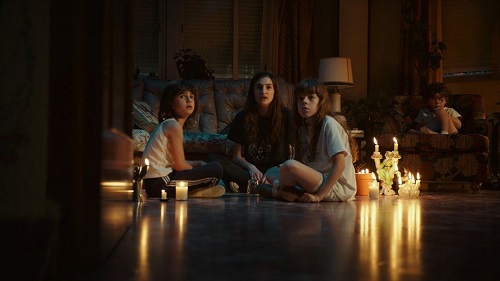 Veronica just hit Netflix streaming and I had heard mostly positive buzz about this supernatural horror film, so I couldn't wait to watch it! It is directed and co-written by Paco Plaza, who is most know for his [REC] movies (he co-directed the first and second of these films with Jaume Balagueró before directing the third film solo) as well as directing the excellent The Christmas Tale segment in the Films to Keep You Awake series. I really enjoyed the [REC] films and The Christmas Tale, so I was interested to see how he would handle a more supernatural-style film.

Synopsis: In 1991 Madrid, a grieving teen holds a seance at her Catholic school during an eclipse to try and get in touch with her recently deceased father. Afterwards, as she is looking after her younger siblings at home, she begins to suspect that she has unleashed an evil entity that is now besieging her and her family in their apartment.

I hadn't watched any trailers and had only a vague sense of what the movie was going to be about before watching it, and I think that mystery as well as a startling beginning (which claims it is based on a true story) really got me hooked! From the beginning, I was invested in the characters and really cared about what was happening to Veronica and her siblings. Veronica was such a likable and sympathetic character, especially since she was grieving over the loss of her father as well as taking care of her siblings while her mother worked in a bar. I really felt for her, especially since she was burdened with an adult role and didn't have time to just be a kid and hang out with friends. I also appreciated how her younger siblings all had personalities of their own and I really grew to like them as well. All of the young actors did an amazing job in the film, and the film itself  did an excellent job of making me really care for the characters, which made the horror all that more terrifying!

Speaking of terror, Veronica is one of the few recent horror movies that actually made me jump! There was a particular scene where Veronica sees something across the house in her sisters' room, and it freaked me out so much I actually jolted in my seat. It takes a lot to scare me, and though the build-up of the scene made it clear something was coming, this scene still got me! I also loved how shadows were used in the film, and how the evil entity in the film is mostly hidden until the end of the movie. There is also some eerie eclipse imagery as well as a spooky nun (and I love me some scary nuns!). There is so much creepy tension in the film, building from the seance and into Veronica's apartment as unsettling begin happening and eventually escalate.

Story-wise, the film doesn't break any new ground, but despite this I was glued to the screen. I didn't care much for the "based on a true story" claims and it didn't add anything to the story, but when a simple story is told right, it just works! And, again, I was really invested in the characters and was also wrapped up in the tension and atmosphere of the film. Kudos to writers Fernando Navarro and Paco Plaza for crafting such likable characters and unrelenting tension.

The film isn't perfect, and there are a few things I wish it had explored and developed a little more throughout the story, but overall I had a thrilling time watching Veronica and it is definitely one of the better horror films currently on Netflix.

Veronica (don't get it confused with another film of the same name released the same year about a psychologist) is streaming now on Netflix and I highly recommend you check it out!