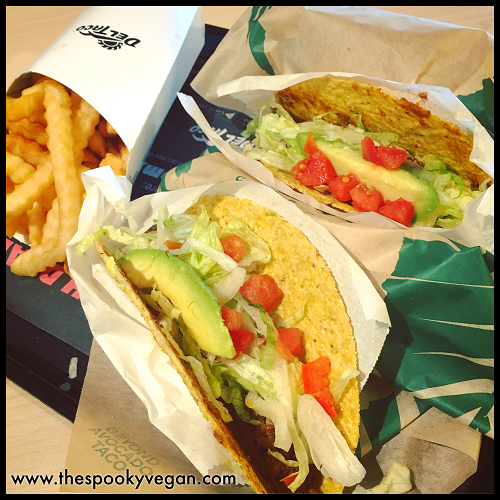 Beyond Avocado Taco and fries at Del Taco

This past December, Del Taco unveiled Beyond Meat at a select few of their locations in Southern California to test out the plant-based meat alternative before hopefully expanding nationwide. This is a HUGE deal and if it is successful, would give so many people access to try vegan food. It means that people want more vegan options and that companies are listening to them. It also means that more people will be exposed to vegan options, and that vegan food is becoming more and more mainstream! I am so, so stoked on this, and couldn't be more excited about Beyond Meat being available at select Del Taco fast food restaurants. Check out my review of their Beyond Avocado Taco below... 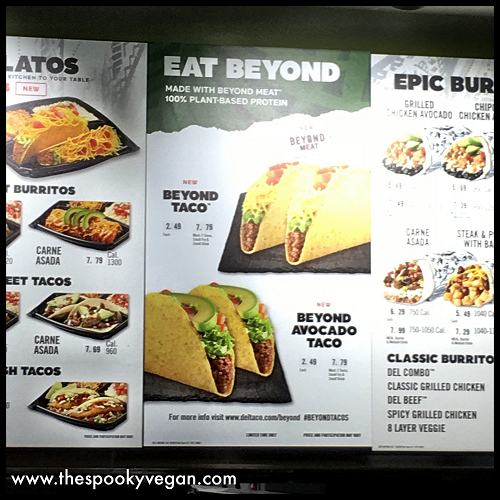 Beyond Meat front and center on the Del Taco menu!!

I was ecstatic to find that one of those test locations serving Beyond Meat is only a 20 minute drive from my house (in Lake Forest, which is in south Orange County). I raced over to try the new vegan option and as soon as I walked in I could see a big sign advertising the new Beyond Tacos, which was really rad!

Currently, Del Taco has two options with Beyond Meat available - the vegan as-is Beyond Avocado Taco and the Beyond Taco, which comes with dairy cheese, but this can be omitted to make it vegan. You can also sub out any protein in any of their other items and add Beyond Meat instead (think burritos, fries, nachos...just make sure to omit any dairy ingredients to make them vegan!).

I ordered the Beyond Avocado Taco - it is vegan as ordered, so no modifications necessary. It comes in a crunchy taco shell, is stuffed with fiesta-seasoned Beyond Meat Crumbles, has lettuce, tomato, and a slice of avocado on top. They got the seasoning of the Beyond Meat just right, and it tasted so good! I haven't had one of their tacos in forever, so the crunchy shell with all that yummy Beyond Meat and fresh lettuce, tomatoes, and avocado was such a delight! Of course I had to order their crinkle-cut fries as well (they are vegan).

If you are in SoCal, you can check if any of the Los Angeles, San Diego, Orange County, or Inland Empire Del Tacos near you are part of the test locations serving Beyond Meat options on Del Taco's site! And if this test market goes well expect to see Beyond Meat at Del Taco locations nationwide!

Stay spooky and go vegan!
Posted by Sarah E. Jahier at 8:47 AM