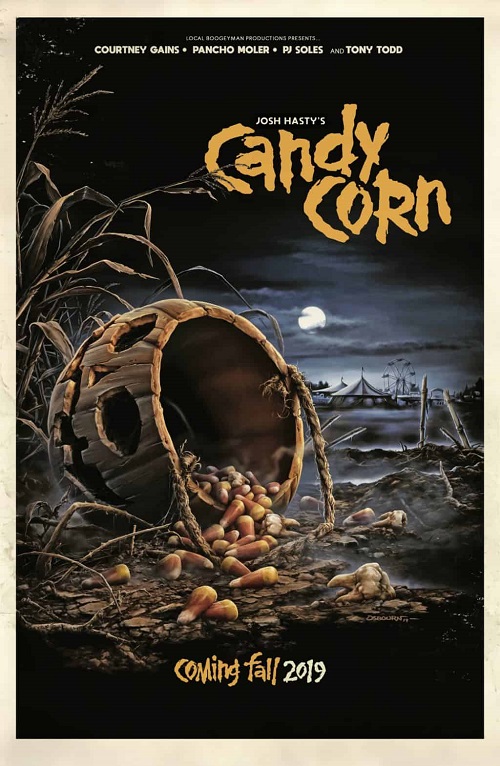 A teaser trailer for the upcoming horror film Candy Corn premiered on Dread Central and has given us a treat to look forward to this Halloween! This is Josh Hasty's next film after his behind-the-scenes documentary on the making of Rob Zombie's 31. I have been looking forward to Candy Corn for quite some time and I am excited to finally get a peek at it! The film's ridiculously gorgeous poster (designed by Fright Rag's Justin Osbourne) was also unveiled, which you can see above. With this as well as the teaser trailer (which you can view below), I am even more excited to see this film, which we will hopefully get to see this year around the Halloween season. Check out the teaser and more info on the film below:

The suspense thriller, Candy Corn, is written, directed, and produced by auteur filmmaker, Josh Hasty (director of In Hell Everybody Loves Popcorn and the acclaimed feature length documentary on the making of Rob Zombie's 31).

Synopsis: It's the eve of Halloween in Grove Hill, Ohio. A traveling carnival is in town for the weekend and local outcast, Jacob Atkins, has been hired as one of the freaks in the event's main attraction, "Dr.Death's Side Show Spook House Spectacular." Meanwhile, a group of local bullies are planning their annual public hazing of Jacob, but this year things go too far.

Stay spooky, my sweets!
Posted by Sarah E. Jahier at 7:00 AM