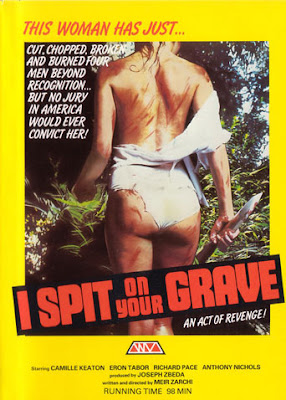 Wanna know a secret? I had never seen 1978’s notorious rape-revenge flick, I Spit on Your Grave (aka Day of the Woman). In fact, I’d never even wanted to see this infamous exploitation flick from director Meir Zarchi. First off, I’m not a big fan of the rape-revenge subgenre. If I really wanted to see chicks exploited and humiliated I may as well watch Girls Gone Wild. I prefer my horror more based on the supernatural, unknown element rather than real-life horrors, thank you very much. Second, people have such strong opinions about I Spit on Your Grave and it’s been so hyped up that I knew it could never live up to its supposed nasty reputation.

However, with the impending remake, I figured I should give the original 1978 I Spit on Your Grave a chance and see if it holds up to the hype.

The plot is pretty slim: a city girl escapes to the country for some R and R and to get some writing done but some backwoods creeps decide to ruin her vacation. First they harass her, then they brutally gang rape and severely beat her repeatedly over the course of one afternoon. They leave her for dead, but several weeks later she takes sweet revenge on the yokels…

Much has been said of the brutal rape scenes in this film…and they are very disturbing, don’t get me wrong. They take up a majority of the screen time and are very hard to watch. However, they aren’t nearly as bad as I imagined. And with this violence taking up such a big portion of the film I was ready for our girl to really get some good revenge on the dudes…

Now that I’ve seen the film I have to laugh at people that call it a “feminist” film. The female flesh on display is clearly exploitative and in several parts the male characters are written so that the viewer actually feels sympathetic towards them. For example, one of the men goes on about his family in a scene and you actually start to feel sorry for him! Another dude is “special” and the film makes it seem like he was peer pressured into raping the woman…like he didn’t know any better and it’s not his fault. Ha! Of course, there is also the glaring example of the rape scenes going on…and on…and on, while the actual revenge scenes are fast and unsatisfying. I was really hoping we’d see the men suffer prolonged deaths, but unfortunately they are all pretty quick and the film is over far too fast.

I can now say I’ve finally seen I Spit on Your Grave, but found it lacking and undeserving of all the hype that’s been built up around it. It’s just another exploitation film that focuses on the rape of female flesh without giving us a satisfactory revenge finale. Lame!