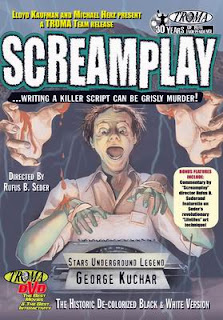 Screamplay has got to be one of the most unique films I’ve ever seen. It is filmed like a washed-out, grainy black and white movie from the silent era mixed with sparse, geometric set design of German Expressionism and all pulled together by a murder mystery. I’m surprised more people don’t know about this film because it’s a very creative and mesmerizing effort from filmmaker (he co-wrote, directed, edited, did the visual effects, etc. for the whole film) and actor (he also plays the lead!) Rufus Butler Seder.


Continue reading my review on Fatally Yours
Posted by Sarah E. Jahier at 1:20 PM